VALLEY OF THE DOLLS Senior Moment

I admit it.  Mixed in with all my Motown and rock albums, I had this soundtrack: 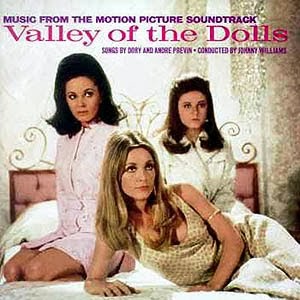 I loved the arrangements.  I loved the lush orchestrations.  I could lip sync every single vocal on that record.  But I wasn't old enough to see the movie or check the book out from our neighborhood library because that lurid tale of booze, pills, Hollywood, Broadway, bedrooms and nervous breakdowns was for grown-ups.  Today, you can see more scandalous stuff during the MTV Video Music Awards.  Did you catch this year's Miley Cyrus number?

A talented cast with two Oscar-winning actresses (Patty Duke as Hollywood's Neely O'Hara and Susan Hayward as Broadway veteran Helen Lawson), one future Oscar-winning actress (Lee Grant) good original songs, fabulous fashions and memorable dialogue that is still quoted today.  Put that all together and what have have you got?  Just like Snakes on a Plane, one of the most brilliantly bad yet entertaining guilty pleasure movies ever made.  It's 20th Century Fox's Valley of the Dolls, based on the sizzling best-seller by Jacqueline Susann.  This was a showbiz trash-with-flash novel that became a big, glossy trash-with-flash movie released in 1967.  The filmmakers seemed determined to make a product that would inspire future generations of drag queens. 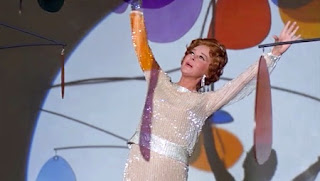 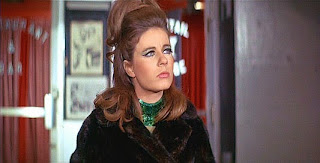 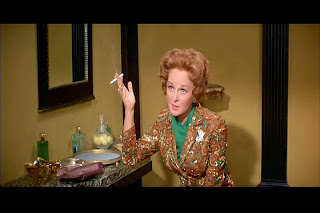 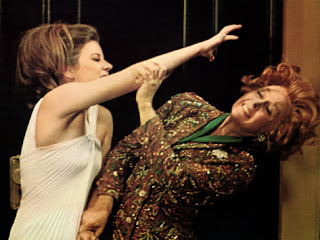 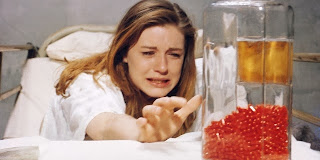 This is a deluxe dog of a movie.  A Beverly Hills poodle with fleas.  It's a great DVD rental to keep in mind for a "Bad Movie Night" with friends, food and beverages.  Like Mommie Dearest, it's a cult classic.  Before he went on to fame, Oscar nominations and Oscar wins for his scores to Jaws, Raiders of the Lost Ark, Star Wars, E.T., the Extra Terrestrial and Schindler's List, John Williams got an Oscar nomination for his  Valley of the Dolls score.  Despite all the acting talent (which included a bit part by future Best Actor Oscar winner Richard Dreyfuss) and all the top shelf production elements, that is the only nomination Valley of the Dolls received.  Even though Dionne Warwick sang their movie theme to Top 40 radio popularity, André and Dory Previn didn't get nominated for any of their fine original songs for the movie.  They were excluded from the Best Song category for 1967.  Just like Paul Simon who wrote music for Mike Nichols' The Graduate.  (The Oscar went to "Talk To The Animals" from 20th Century Fox's musical fantasy, Doctor Dolittle.)  Patty Duke's hair did not get a much-deserved nomination for Best Special Effects.

Oscar winner Patty Duke had better dialogue in The Miracle Worker but she does the best she can and makes her cheesy Valley of the Dolls lines quotable.  Lines like "Ted Casablanca is not a fag!  And I'm just the dame who can prove it."  There was also, "I have to get up at five o'clock in the morning and 'Sparkle, Neely, sparkle!'"

For fun, I rented this deluxe special edition Valley of the Dolls DVD. 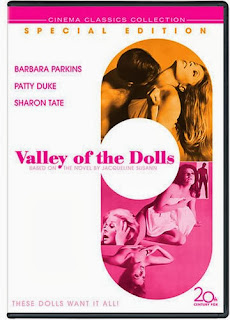 I watched the movie, laughed when I shouldn't have been laughing and was entertained yet again when I probably shouldn't have been by all the socio-cultural incorrectness.  I played it again and listened to the commentary.  The special guest was Valley of the Dolls star, Barbara Parkins.

Ms. Parkins added very interesting notes and information as she spoke to Ted Casablanca, known as one of the popular E! entertainment news reporters.  That's not his real name.  He took that name from one of the characters in Valley of the Dolls when he elevated from print journalism to national on-camera celebrity news gigs. 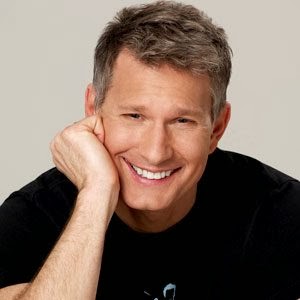 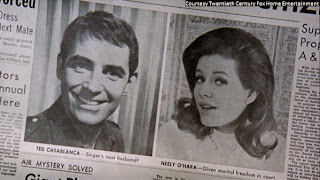 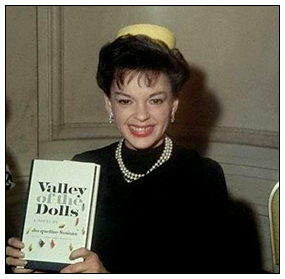 Parkins talks about her brief time working with Judy Garland. 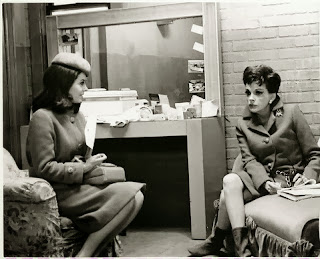 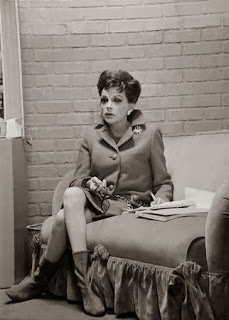 The famed singer and movie icon was fired and replaced with Susan Hayward. 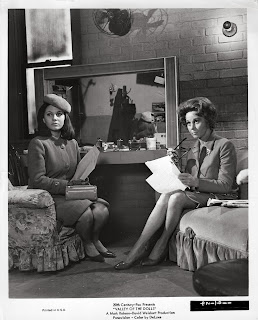 In the first five minutes of the movie, we get a flashback to learn something about the educated and sophisticated Anne Welles (played by Parkins).  She saw first-hand that "....you have to climb Mount Everest to reach the Valley of the Dolls."  We see Anne's home in small town New England.  Like a Norman Rockwell painting.

We see Anne's sweet Aunt Amy.  Ted Casablanca asked Ms. Parkins who the older actress was.  Parkins didn't know.  He replied that she was probably just some extra.  Maybe she was at that time, but actress Judith Lowry was a CBS sitcom star when she died about ten years later at age 86.  From Aunt Amy in 1967's Valley of the Dolls, Judith Lowry went on to click so well with viewers as spirited and outspoken Mother Dexter opposite Cloris Leachman on Phyllis, the 1975 spin-off from The Mary Tyler Moore Show, that her part was beefed up.  She was promoted from guest spot to series regular.  She, like Rhoda Morgenstern, got to wear a bridal gown in one special sitcom episode. 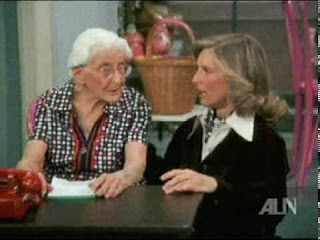 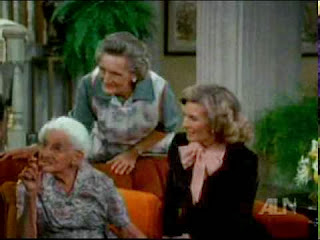 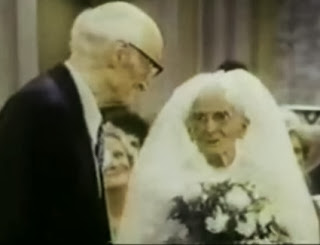 Judith Lowry had a very erratic yet impressive character.  She began as a stage actress but postponed theater work to raise nine children.  In her 60s, she really started to hit her acting stride.  She was a popular face in TV commercials and in episodes of network TV shows.  The slim, white-haired lady had screen charisma and always stood out whenever you saw her.  For director/actress Ida Lupino, she played Sister Prudence in the 1966 Catholic school comedy, The Trouble With Angels starring Rosalind Russell.  You noticed Lowry in the musicals Sweet Charity (1969) and On a Clear Day You Can See Forever (1970).  Lowry has a funny, tart scene with Margaret Hamilton of The Wizard of Oz fame in Sidney Lumet's 1971 Manhattan heist drama, The Anderson Tapes.  She booked an important supporting role opposite Joanne Woodward in Fox's 1972 critical triumph, The Effect of Gamma Rays on Man-in-the-Moon Marigolds directed by Paul Newman. 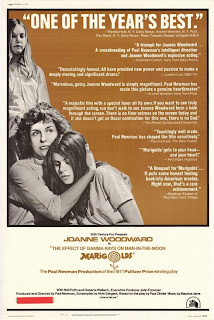 Then came the sitcom, Phyllis, in 1975.  Lowry got big laughs from millions of viewers on the show.  She passed away in 1976 and really did leave us wanting more. 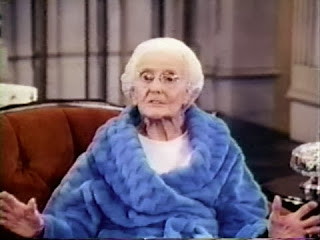 Judith Lowry made have been just an extra in Valley of the Dolls but she ended her days as a popular regular on a CBS sitcom.  Tell entertainment reporter Ted Casablanca.