Fred, Judy and Gene on TCM

If you're a fan of legendary movie musical talent, Tuesday, Oct. 8th, was a great day to watch Turner Classic Movies.  TCM aired The Sky's the Limit starring Fred Astaire. 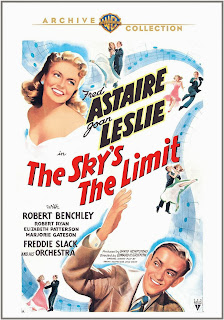 This was followed by Ziegfeld Follies, a 1946 MGM all-star musical comedy revue that included Fred Astaire, Judy Garland and Gene Kelly and several other stars. 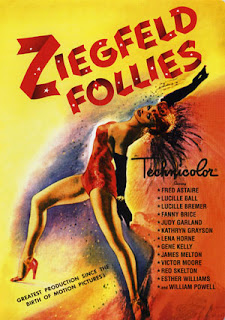 That was followed by Summer Stock starring Judy Garland and Gene Kelly. 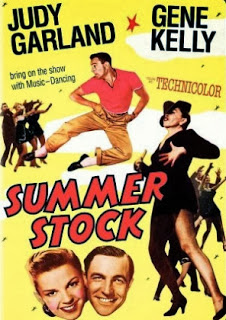 I'm lucky.  When I was a youngster, those three were still alive and still performing -- on TV more than in movies.  I could see their classic movies on local L.A. television channels when I got home from school during weekdays or as The Million Dollar Movie at night.  This was an era long before cable TV and DVDs -- so the movies had commercial interruptions, the prints weren't always in mint condition and they were all seen in black and white...because we had a black and white television set.  This age of TCM, remastered movies shown uncut and uninterrupted and DVDs is a blessing.  Thank you for those three DVDs, Warner Archive.

I have a question about Astaire, Garland and Kelly.

In 1943's The Sky's the Limit, there was Fred as a decorated serviceman on leave.  He's flown missions in World War 2.  Here he is with a squadron member, played by a young new actor named Robert Ryan.  These war heroes have become celebrities. 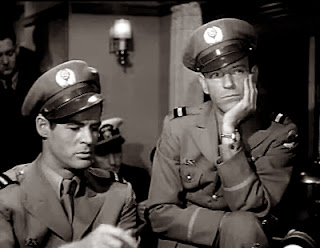 The airman shuns the spotlight as a war hero and travels incognito on leave.  He meets a lovely celebrity magazine photographer in New York City.  She wants to help in the war effort. They fall in love and war will separate them.  She doesn't know that because she thinks he's just a happy-go-lucky drifter who couldn't qualify for active duty and avoids getting a job.  With music by Harold Arlen and lyrics by Johnny Mercer, co-star Joan Leslie and Astaire danced to and sang new tunes that are now standards. 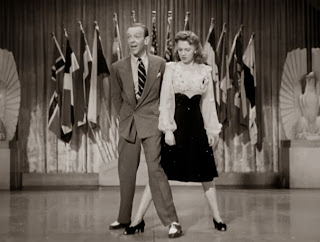 Arlen & Mercer wrote "My Shining Hour" for The Sky's the Limit.  It got an Oscar nomination for Best Song.  Fred Astaire and Joan Leslie did a lovely terrace dance to it. 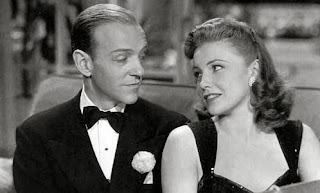 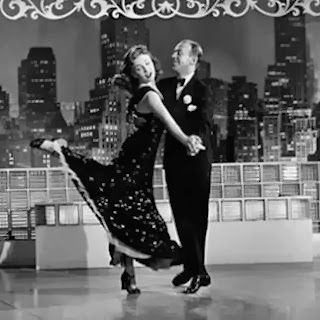 Another song written for the movie was introduced by Fred Astaire in a solo number.  After a break-up with his girl and thinking he'll never see her again, he hits a couple of bars to drink away the heartbreak and the anger.  He's mad at himself, he's mad at the war.  The rage is expressed in the dance.  The song went on to be recorded by other greats like Frank Sinatra and Billie Holiday.  Fred Astaire did one of the best solo dances of his movie career to "One For My Baby (and One More for the Road)" 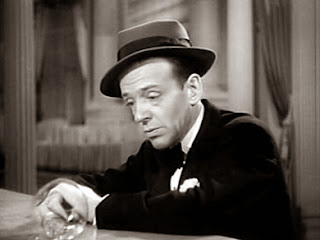 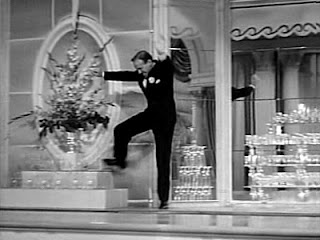 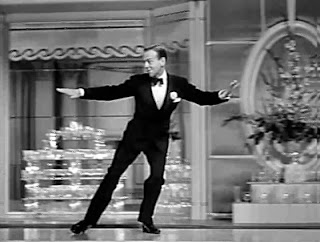 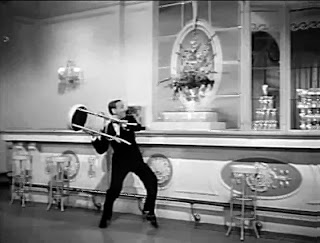 RKO's The Sky's the Limit doesn't have the popularity that the RKO musicals Astaire did with Ginger Rogers do.  Nor does it have the popularity of his later musicals like Holiday Inn with Bing Crosby, Easter Parade with Judy Garland and Funny Face with Audrey Hepburn.  But this is one of my favorite Astaire musicals.  He doesn't just sing that bittersweet song, he acts the song, he acts the progression of his drinking and he acts out his emotional conflict in his dance.

On a personal note, when I returned from my partner's funeral in 1994, I felt like my heart and soul had been torn right out of me.  One of my best friends came to visit and comfort me.  I was so angry that such a good, kind man had died young.  I was angry at the world and angry at the disease that took his life.  I asked my friend to help me throw out all the liquor I had in my apartment -- because I felt like I just wanted to drink heavily and break things.  Reportedly, some viewers complained about the amount of glass Astaire's character breaks in the "One For My Baby" number.  I understand his rage.  That was a great, bold and truthful acting choice for Astaire's routine.

He was in his early 40s at that time.  Astaire also choreographed all the numbers in the movie.  The "One For My Baby" routine proves that, like Gene Kelly, Fred Astaire was also athletic in his dances.  In Ziegfeld Follies, Astaire (still in his 40s) dances again. 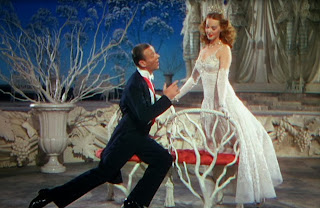 We viewers get an extra treat, one that has its place in cinema history.  This movie marked the first time that Gene Kelly and Fred Astaire did a dance number together. 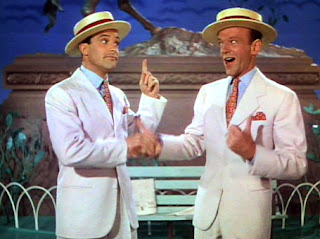 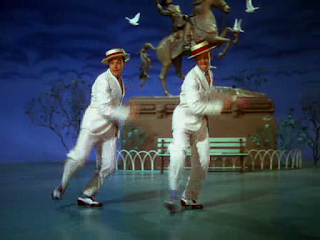 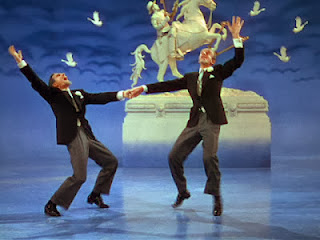 Judy Garland has a show-stopper of a number.  In top form, she is super glamorous in the satirical musical piece, "A Great Lady Has An Interview."  Hollywood folklore has it that this funny, jazzy original material was originally offered to MGM's grand dame of dramas, Greer Garson.  But the Best Actress Oscar-winning star of Mrs. Miniver, Mrs. Parkington and Madame Curie politely rejected it.  Thank goodness.  It's a swell fit to showcase Judy Garland's talent for sophisticated comedy, a talent which was under-utilized at MGM.  And Lord know she could sing that special Kay Thompson and Roger Edens material.  She's a hoot as the hightone Hollywood diva giving an "impromptu" interview to talk about the frustrations of being pegged in Oscar-winning biopics.  She wants to swing out and get down -- which she does with the gentlemen of the press as her back-up dancers. 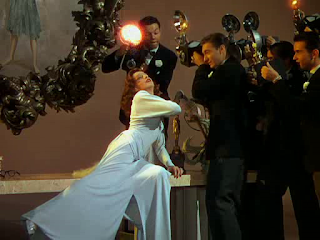 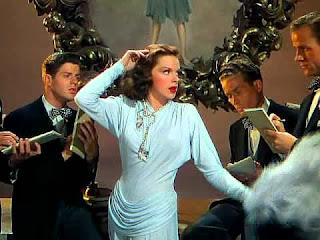 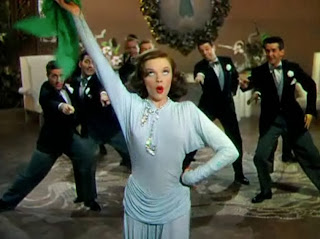 Today, Meryl Streep or Cate Blanchett would probably be asked to perform this number.

Judy was one of Hollywood's ultimate triple threat entertainers.  She could sing, she could dance, she could act.  She got two Oscar nominations to prove it.  In Summer Stock, she and Gene Kelly teamed for the third and last time in a musical for MGM.  Garland does some of the best dance work of her film career in this musical with Kelly as her partner.  In the "Portland Fancy" barn dance number, she's so good that you almost watch her more than you watch Kelly, who had way more formal dance training that she did. 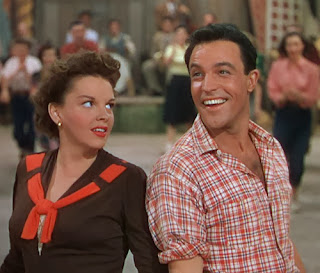 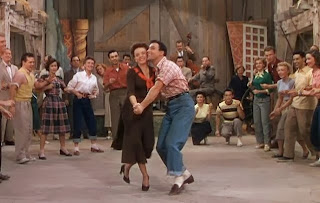 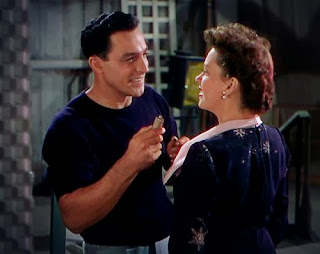 This was a top gem in the crown of his movie musical too.  He too could sing, act and -- of course -- dance.  His newspaper dance to "You, Wonderful, You" is just flat-out brilliant. 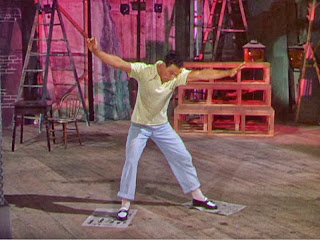 We come to the finale of this "Let's put on a show" musical and what do we get?  Judy Garland in her now-iconic "Get Happy" number.  This number is essential viewing for anyone who wants to know what made Garland a superstar during her MGM years. 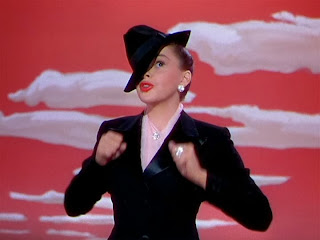 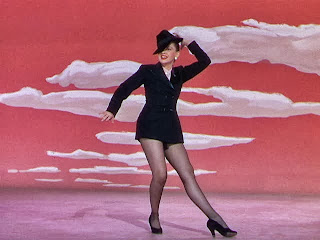 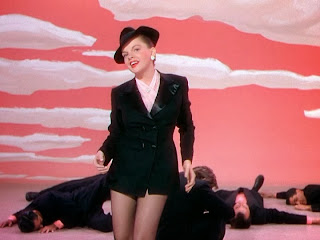 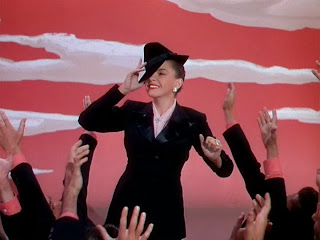 This was also the first and only film that put Judy Garland on a tractor.

This was Judy Garland was she was still in her 20s.  She and MGM came to a mutual agreement to part ways.  She'd been a contract player for 15 years.  Summer Stock (1950) was after The Wizard of Oz, after the enormous success of Meet Me in St. Louis and years before wowing movie critics with her musical/drama comeback performance in George Cukor's masterpiece, A Star Is Born.  Garland's performance put her in the Oscar race for Best Actress of 1954.  She introduced the song, "The Man That Got Away" in that remake.  In the 1960s, she'd be a Best Supporting Actress Oscar nominee for her dramatic work in Judgment at Nuremberg.

Gene Kelly would go on to even greater artistic achievements as choreographer and performer in An American in Paris, Oscar winner for Best Picture of 1951, and the much-acclaimed 1952 musical, Singin' in the Rain.

Fred Astaire would go on to rave reviews in one of MGM's biggest gems in its crown of movie musicals.  The Band Wagon (1953) is one of the most sparking of classic Hollywood movie musicals and one of Astaire's finest films.  If it was showing on a cineplex today, his "Dancing in the Dark" number with Cyd Charisse alone would be worth the price of admission.  With the "Girl Hunt" jazz ballet number, Astaire reinvented himself as a dancer -- a dancer who'd made Hollywood history in original screen musicals co-starring Ginger Rogers in the 1930s.

I watch television today and shows like The Voice, American Idol and So You Think You Can Dance remind me of Addison DeWitt's remark to an aspiring actress in All About Eve:  "That's all television is, my dear.  Nothing but auditions."

If Fred Astaire, Judy Garland and Gene Kelly were alive today and in the age categories they were in those three musicals that aired on TCM, would work could those Hollywood legends hope to get in Hollywood today?  The movies, especially musical movies, made them international stars and show business legends.  To see them on TCM in those three movies and know that they each had bigger successes yet to come was really something.

What would Hollywood do with those iconic triple threat talents today?