He sure has come a long way since he played a tough dude in the 1982 teen comedy, Fast Times at Ridgemont High.  He went on to become one of the few African-Americans to win the Oscar for Best Actor.  He got Hollywood gold for his performance as Ugandan dictator Idi Amin in The Last King of Scotland (2006).  For the record, three "kids" in Fast Times at Ridgemont High went on to take home Best Actor Academy Awards -- Forest Whitaker, Sean Penn and Nicolas Cage.  Over the summer, I was riveted to Whitaker's work in Lee Daniels' The Butler.  I will not be surprised if that performance puts him in the Best Actor Oscar category again.  I was a child of the Civil Rights era.  Seeing Forest Whitaker play a butler to several White House presidents as the country grappled with civil rights and racial equality touched me to to my soul.  I knew how his character felt. 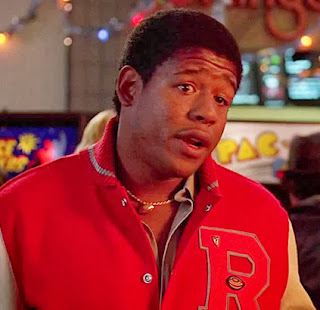 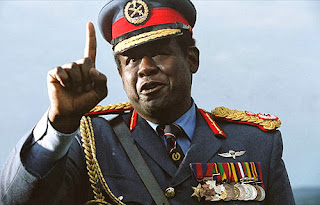 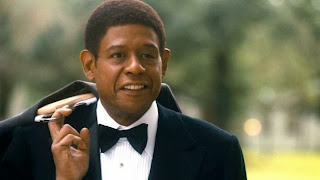 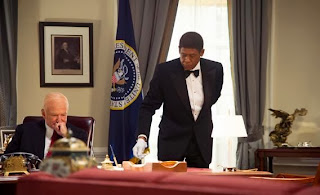 Forest Whitaker is eligible as an Oscar contender in two categories -- for Best Actor and as producer of a Best Picture nominee.  He produced Fruitvale Station, an independent film that I also saw over the summer.  I sincerely hope this film is one of the possible ten nominees announced in the Best Picture category come early next year. 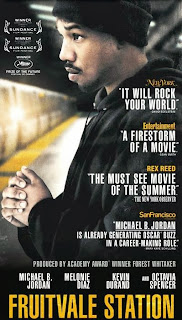 I saw it one afternoon at a San Francisco cineplex.  I was sitting in a row behind a half dozen young women who looked like the kind of photogenic, well-dressed fans you'd see in front rows for the American Music Awards or The Grammys.  At the end of the movie, those girls and I all had tears running down our faces.  This movie really hit us.  It's such a moving film based on a real life incident that made national news.  The title is the name of a stop on California's Bay Area metro line where a confrontation with transit cops took place on New Year's Eve.  Michael B. Jordan, in a powerful screen performance, plays Oscar Grant.  Grant was shot by transit police and died from his wounds.  He, the mother of his child and their friends were on their way from Oakland into San Francisco to celebrate New Year's Eve.  We see the young man on the last day of his life.  On that train, in that station, there was an intersection of family, friends, enemies, strangers and authority that makes the last night of Grant's life in Fruitvale Station seem like something out of a Greek tragedy. 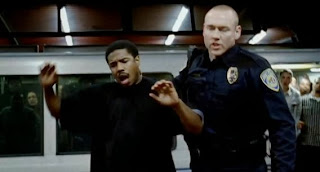 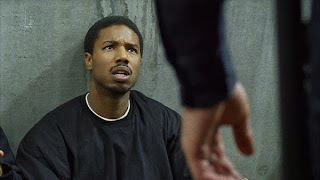 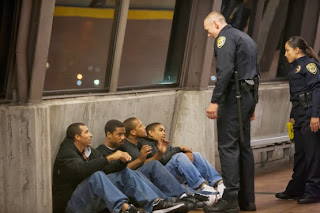 Grant is not an innocent young man, as we see in the film.  We also see that, after he did time behind bars, he knuckled down and worked to be responsible to the mother of his child, to his child and to his own mother.  No, he was not a perfect person but he did not deserve to die young, to die the way he did.  This is the first feature from director/writer Ryan Coogler. He won a top prize at the Sundance Film Festival. 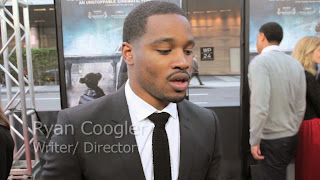 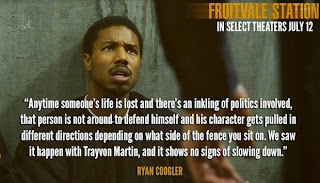 The movie also boasts another solid supporting role performance from Octavia Spencer as Grant's mother.  Spencer won a Best Supporting Actress Oscar for The Help.  Filmed in a bit of a documentary style, there are times when the acting is so truthful, so real that it does seem more like a documentary than a feature film. 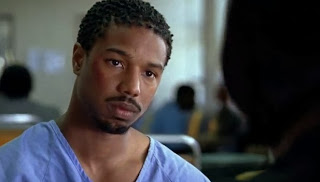 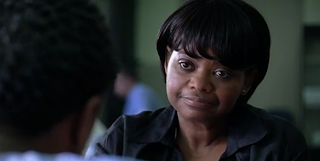 Oscar's mother is very important to him.  We see that in his respect towards her at home.

Sophina, the mother of his child, and his child are also dear to him.  We see that too. 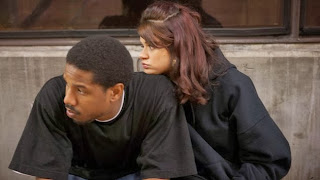 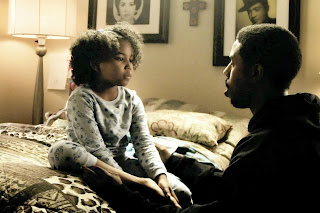 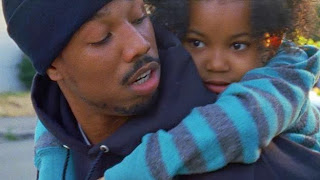 Michael B. Jordan could be on his way to an Oscar nomination.  It is his performance that grabs you and anchors the film.  He's an actor to watch.

Here's a recommendation for a DVD double feature that will show you the versatility of another Fruitvale Station cast member.

See Fruitvale Station and then lighten up the mood by watching the 2008 indie comedy, Hamlet 2.  I totally dig this comedy about a failed actor who becomes a high school drama teacher in Tucson, Arizona.  He directs the school plays.  The drama critic is one of the high school students.  The teacher's acting career peaked years ago with a role in a herpes medication TV commercial.  Instead of acting in Hollywood, he's directing high school plays.  And getting bad reviews in the school newspaper.  From a kid. 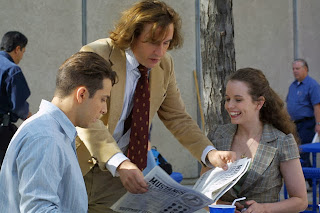 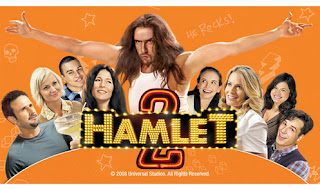 This teacher, played by Britain's Steve Coogan, is a hot mess.  But he doesn't give up on his dreams.  He turns things around and causes a major controversy in that culturally arid town when he writes a rock musical that combines Shakespeare and a sexy Jesus.  It's called Hamlet 2.  The kids dig it and want to be a part of this hip, edgy original musical. 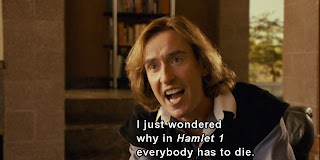 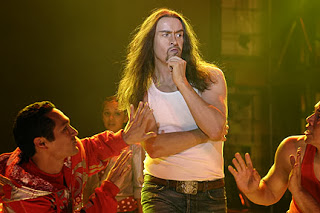 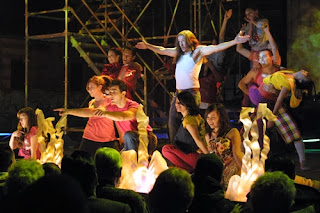 Steve Coogan co-wrote and stars opposite Judi Dench in Philomena. 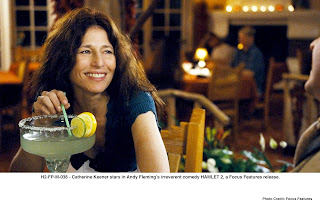 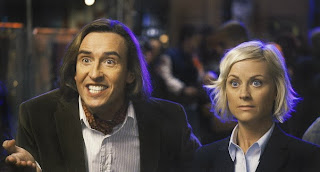 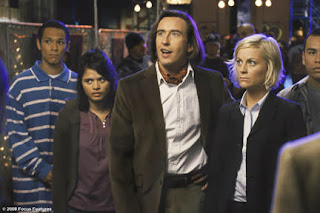 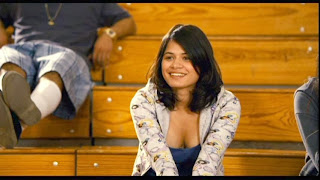 One of my favorite wisecracking students in the drama class was played by sweet Melonie Diaz.  I saw this movie at a screening for critics.  The movie didn't really do much at the box office but it made me laugh a lot.  When I saw Melonie, I thought "She's got the comedy gift."  That's not the only gift.  She plays Sophina, the street smart and loving mother of Oscar Grant's child in Fruitvale Station and what a strong dramatic portrayal she delivered.  Melonie Diaz is a very good actress. 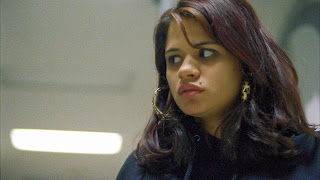 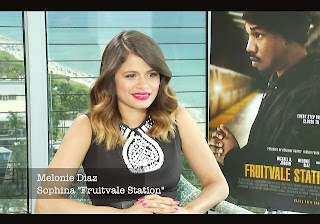 Fruitvale Station got a standing ovation at the Cannes Film Festival.  Let's see how it does with Hollywood come Oscar nomination time on Thursday morning, January 16th. 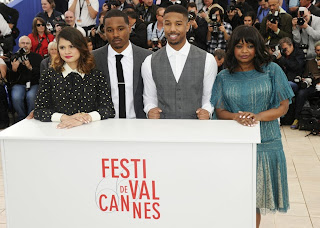