Getting old in America sometimes seems like an unforgivable sin that, if you're lucky, you can't help committing.  I just got around to seeing Make Way For Tomorrow, a 1937 release from Paramount Pictures about a couple married 50 years and forced to separate in New York City due to finances and selfish family members.  Not only did it put tears in my eyes at the end, but I pretty much sat slack-jawed at the brilliant acting and directing in this simple, tough yet touching film.   The DVD is in the Criterion Collection of fine films.  I highly recommend it.  This 90-minute gem could make Darth Vader cry. 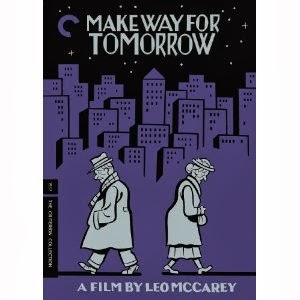 This is the kind of old movie that young acting students today should watch as a lesson in the art of screen acting.  They should mainly watch Beulah Bondi, one of most popular character actresses of her time, as 70 year old Lucy Cooper.  If you don't readily know Bondi's name, you'd know her face.  She played George Bailey's warm-hearted mother in 1946's It's A Wonderful Life, one of the few movies she did with James Stewart. 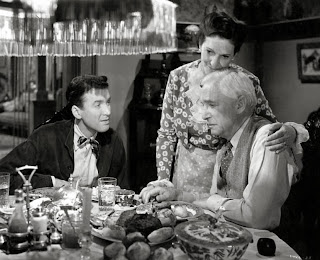 Also in It's A Wonderful Life is Thomas Mitchell.  He played absent-minded Uncle Billy. 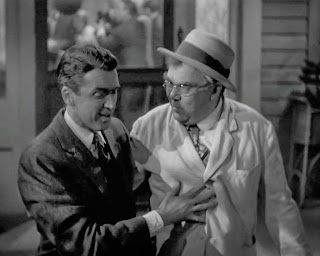 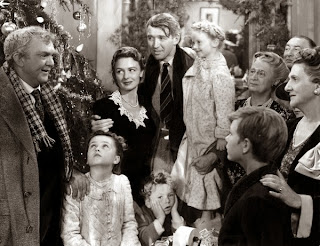 In the photo above, he's to the far left and facing Bondi who's on the far right.  Bondi and Mitchell also had supporting roles in 1939's Mr. Smith Goes To Washington starring James Stewart.

Beulah Bondi and Thomas Mitchell were in their mid-40s when they made Make Way For Tomorrow. He played one of Lucy Cooper's grown and married children. 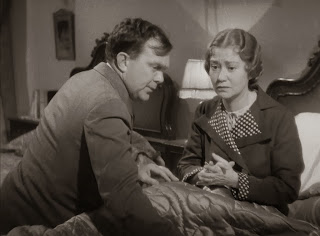 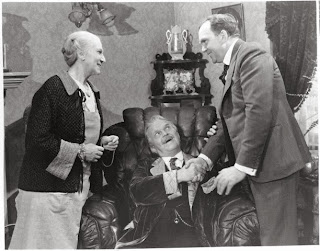 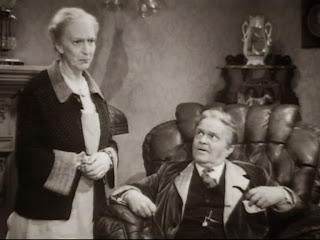 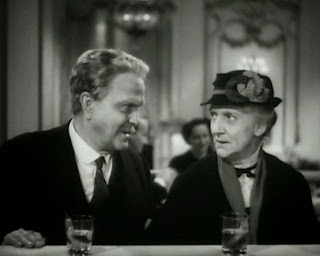 You totally believe that she is his 70 year old mother in this story.  She's stunningly good.  If Meryl Streep had never seen this movie and watched it with me, she would've been slack-jawed too at the brilliance of Beulah Bondi's performance.  There's so much depth and dimension to her portrayal.  It's so real, so human, so memorable.  You understand what drives her.  You see why her husband, Barkley (played by Victor Moore) has loved her for 50 years.  You see how Lucy could get on your nerves.  You see how she can be dear to your heart.  You see her flaws and her fears, her strength and her love. 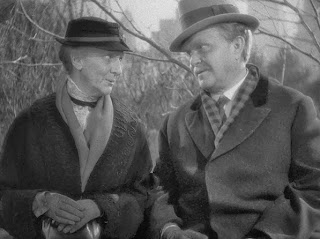 Known mostly for comedy, Victor Moore was the cardshark comic sidekick to Fred Astaire's character in the Fred Astaire and Ginger Rogers RKO musical comedy classic, Swing Time (1936).  It's amazing how effective some comic actors can be when they're given the chance to do drama.  He's so good here.

The title has a sunny, optimistic tone to it but there's a dark undercurrent present.  The subtext for seniors could be, "Get out of the way.  There's no room for you here.  You're old.  You're broke."  That's what I mean about this movie being tough yet touching. 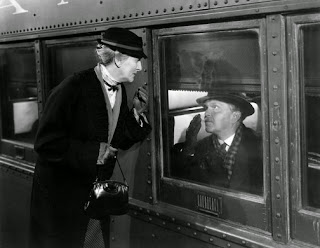 I tried to watch this movie back in the 1980s or early '90s on television and I wasn't emotionally in a place to appreciate it fully then. Now I'm older, seeking work, financially challenged due to the Recession and wishing that I was a well-paid national TV performer like a Tom Bergeron, a Carson Daly or even Snooki from Jersey Shore.  If I was, I could afford a nice house and move my mother into it with me.  She's older than Lucy Cooper.  True, this story may seem dated because it was made in the 1930s, the Depression Era.  But we're in a Great Recession now.  Aging people are losing their homes and people have tapped out their savings.  Folks who thought they were doing everything right suddenly had nothing and were forced to move in with relatives.  People can relate to this drama today.

Leo McCarey directed this classic.  It opens at Christmastime with cold and a thick blanket of snow.  Lucy and Barkley have five grown kids.  Four of them, each well-dressed, are paying a holiday visit.  One lives in California.  From the chit-chat, we pick up that six months have passed since some previous contact from the grown offspring.  Dad hasn't worked for four years.  He is still seeks employment.  Mom and Dad break the news that they couldn't keep up the payments on their house and the bank took it.  They're forced to separate and each lives with one of the children temporarily. 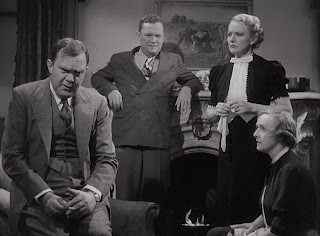 This causes frustrations and family friction.  For instance, Lucy's mere careworn presence seems to ruin the ambience of her daughter-in-law's business.  The daughter-in-law (played by Fay Bainter) teaches bridge, a card game.  McCarey lets us notice for ourselves that the Manhattan bridge students come over at nights in formal attire. 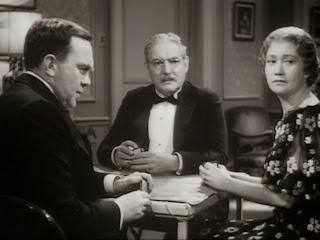 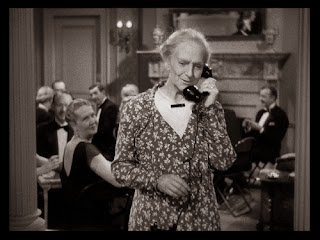 There's room for that swanky crowd to play cards but no room for mother.

Lucy and Barkley Cooper must face the facts of the present and the future. 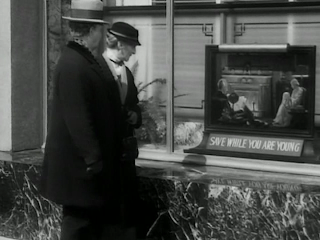 While being treated like foster children, they notice a sign in a store window that reads:  "Save While You Are Young." Yes, it's an old film but viewers today could connect to it.

I'm glad I'm old enough now to appreciate this film.  Because of the financial hardships of modern times, I've also grown into it.  I can feel the truth of Make Way For Tomorrow.  One other thing:  I took some acting classes in New York City.  Those classes gave me a greater respect for acting -- a complicated and challenging craft that, if done well, looks easy when it really isn't.  Ms. Bondi, from film roles starting in the early 1930s to episodes of CBS' The Waltons in the mid 1970s, made hard work seem effortless.

Beulah Bondi's performance in Make Way For Tomorrow is a masterpiece.  And she was only in her 40s.  Today's young film acting students should study classics like this. 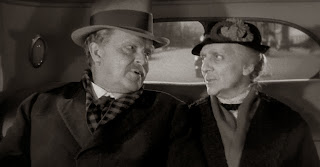 Leo McCarey won the Oscar for Best Director of 1937.  But not for Make Way For Tomorrow.  This highly-regarded film got no attention at Oscar nomination time.  But McCarey's sparkling screwball comedy, The Awful Truth starring Irene Dunne and Cary Grant, did well.  It was nominated for Best Picture and for Best Screenplay. 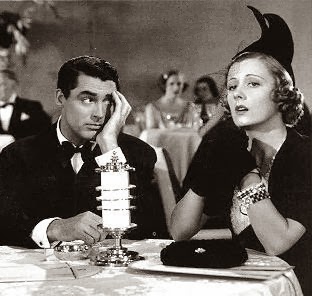 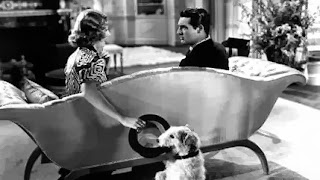 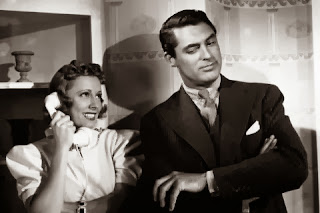 The Awful Truth is one of the best and bubbliest screwball comedies of the 1930s.  Viña Delmar, who was nominated for her very funny screenplay, also wrote the screenplay for McCarey's heartbreaking Make Way For Tomorrow.

Irene Dunne was a Best Actress nominee.  The story of a sophisticated young married couple that separates due to assumed infidelity, teeters on the brink of divorce and then falls in love all over again brought Leo McCarey the Hollywood gold for Best Director.

McCarey gave us two marvelous, different movies in the same year.  I feel that Make Way For Tomorrow was also worthy of Oscar nominations in the Best Picture, Best Actress, Best Screenplay and Best Director category.  Check it out on The Criterion Collection.