From Hollywood's Golden Age, she is one of the Best Actress Academy Award winners who is here to celebrate a birthday.  Joan Fontaine was a big hit in two Alfred Hitchcock dramas.  One of those romantic psychological thrillers brought her the Oscar.  She won for 1941's Suspicion, co-starring Cary Grant as the very handsome, very charming cad of a husband who could be plotting to kill her.  This was also a Best Picture nominee. 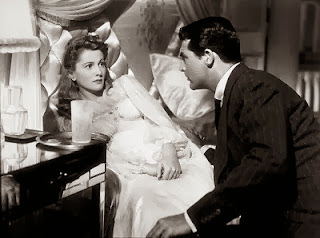 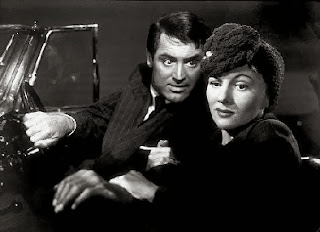 Before that, she was the perfect choice to play the second Mrs. de Winter in 1940's Rebecca.  She truly didn't seem to stand a ghost of a chance living a happy life in Manderley.  She was emotionally and physically dwarfed by that huge mansion. 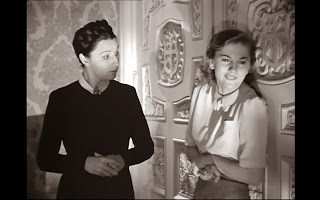 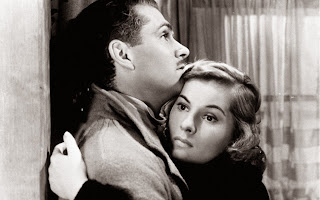 No one could arch an eyebrow for dramatic effect like Joan Fontaine. 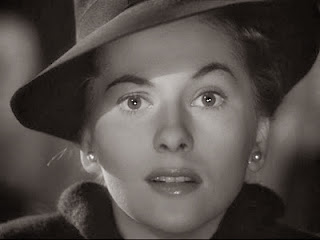 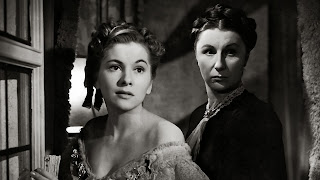 There are Fontaine films that I totally dig -- like her Hitchcock films, both of which made her an Oscar contender.  I have watched and re-watched her work in Jane Eyre, The Constant Nymph (her third Best Actress Oscar nomination), Ivy, Letter From An Unknown Woman and her saucy, colorful turn as a lady pirate in Frenchman's Creek.  That one is a fun Technicolor romp co-starring Arturo deCordova, an actor not so famous here but an extremely famous and talented film star in his native Mexico and Latin America. 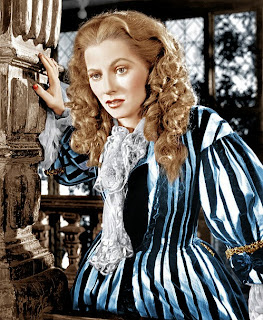 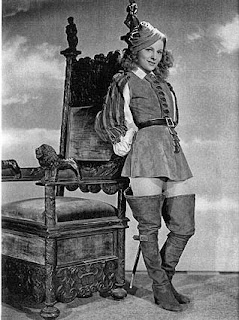 Besides being lovely and having a definite sexual allure (which she used to fabulous film noir deadly effect as Ivy), Fontaine also had a definite comic flair.  She could arch that eyebrow in a sly way to get a laugh too.

The allure and the flair for comedy are utilized quite well by director Mitchell Leisen in Frenchman's Creek.  I wish that one could get remastered and restored in all its luscious Technicolor glory so we Fontaine fans could see her at her swashbuckling best.  When I was a kid in Southern California, Frenchman's Creek kept me entertained several times on KTLA/Channel 5 on weekends off from school and during summer vacations.

I bet that a number of classic film bloggers write long salutes to her today, so there will be no shortage of info about Fontaine's career.  I'll use my space to recommend three Fontaine favorites of mine if you can find them.

I thought she gave one of her best and most-challenging screen performances as an alcoholic stage actress in Something To Live For.  This 1952 drama was directed by George Stevens, the man who also directed Joan Fontaine in the RKO Fred Astaire musical comedy, A Damsel in Distress (1937) and in the action/adventure movie Gunga Din (1939).  Her co-star is Ray Milland.  He won his Best Actor Oscar for playing an alcoholic in Billy Wilder's The Lost Weekend.  Here, he's a family man and a recovering alcoholic who tries to help the troubled actress.  Honestly, the script isn't as good as The Lost Weekend, I'll Cry Tomorrow starring Susan Hayward or Days of Wine and Roses with Jack Lemmon and Lee Remick.  But Joan Fontaine's performance sure makes up for that.  She and Milland are something to see in Something To Live For. 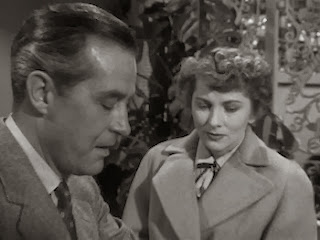 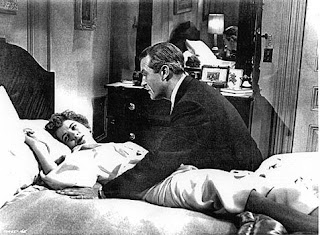 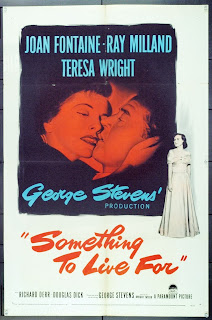 20th Century Fox's Island in the Sun gave Joan Fontaine the opportunity to do something she could not have done in Hollywood's Golden Age of studio films in the 1930s and 1940s.  She played a sophisticated lady who throws the most elegant and casual flirts at a handsome young doctor played by ... a black actor. 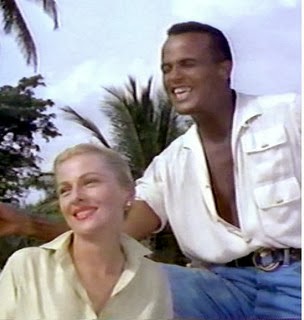 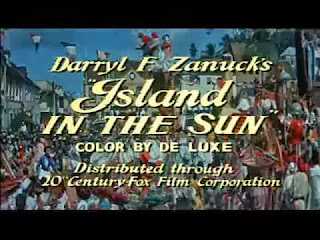 That's fairly commonplace now on TV and in movies but that was quite daring in the pre-Civil Rights decade for a major studio Hollywood release -- and an Oscar-winning Caucasian actress.

In Cinemascope and De Luxe color, Joan Fontaine and Harry Belafonte make a couple that's quite easy on the eye in Island in the Sun (1957).  Dorothy Dandridge and James Mason co-star in this tale of modern-day race relations.

The 1970s -- what a great decade for television features.  That was sort of the Golden Age of Made-for-TV Movies.  One of my favorites was 1978's The Users.  This was based on a novel by a former Hollywood gossip columnist for the Los Angeles Times.  It starred Jaclyn Smith, Tony Curtis, John Forsythe and Joan Fontaine.  My mother and I both watched this.  Mom remarked, "Wow.  She's got sort of a Gene Tierney look goin' on" when Jaclyn Smith entered for her first scene.  Mom also wanted to see Joan Fontaine who had a fabulous and lively supporting role.  She was as a Hollywood socialite and insider who could match wits with the top Hollywood players.

The TV adaptation gave us a refreshing spin on the "hooker with a heart of gold" angle.  Smith is basically playing a hooker who moves up to Hollywood wife with a heart of gold.  The hooker came from a poor small town existence where she tried to care for her ailing mother.  A middle-aged actor on location does her a favor and makes her life better.  She's basically determined to return the favor and do the same for him.  Hollywood considers him a has-been. Tony Curtis played the faded actor.  Elena, the former hooker, will scheme and negotiate his big screen comeback better than any Hollywood agent ever could.  She'll also do pretty well for herself.  A socialite will help her up the Hollywood ladder.  This was juicy and glamorous network entertainment, made when Jaclyn Smith was a hot star as a curvy private eye on ABC's Charlie's Angels.

In 1937, moviegoers saw Joan Fontaine dance (a very little bit) with Fred Astaire to a new Gershwin tune for RKO's A Damsel in Distress.  In 1939, she'd been one of The Women, a classic directed by George Cukor.  She's on the far right of this cast photo with Cukor. 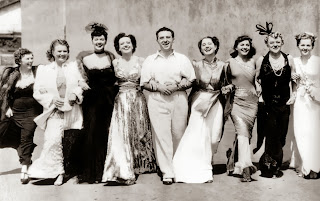 In 1978, Joan Fontaine added verve to The Users, a made-for-ABC TV movie.  That's a long-running career that one can point to with pride.  More TV work for her followed this. 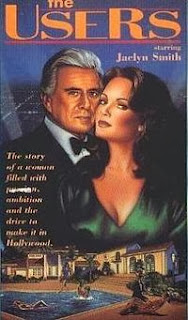 Time to mention another Oscar winner.  For her brilliant 1949 performance as The Heiress, Olivia de Havilland won her second Best Actress Academy Award. 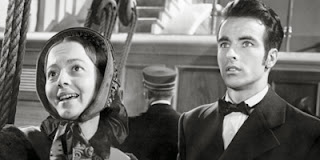 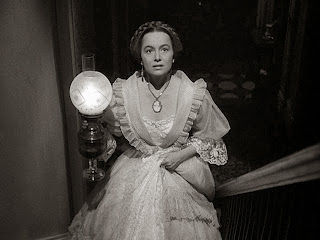 Her first Best Actress Oscar came for 1946's To Each His Own.  Olivia de Havilland is the last surviving star of the 1939 classic, Gone With The Wind.  For that Civil War epic and box office champion, de Havilland was an Oscar nominee for Best Supporting Actress. 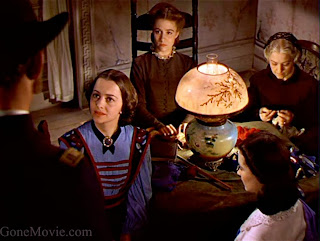 Olivia is Joan Fontaine's sister and they are the oldest surviving sisters who have won Best Actress Academy Awards.  Olivia de Havilland is now 97. 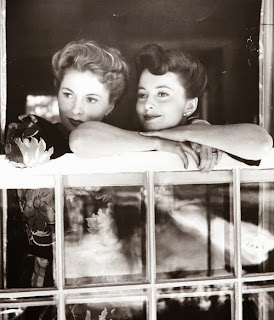 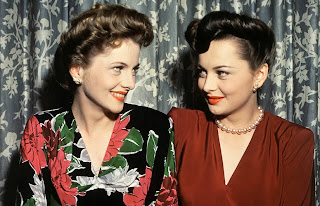 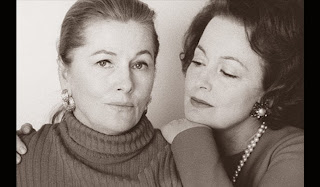 The first woman to win two Oscars for Best Actress was Luise Rainer.  She won them consecutively in the 1930s for The Great Ziegfeld and The Good Earth.   She's now 103. 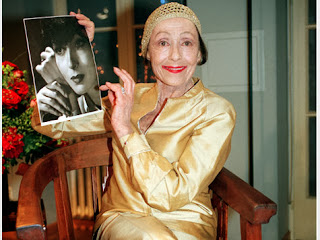 During the Oscars telecast early this year, instead of having host Seth McFarlane try to give the Academy Awards show the vibe of the MTV Awards and appeal to 20-something males, I wish the Oscars telecast writers had included a respectful and grateful salute to the history of Hollywood.  I wish they would have acknowledged the presence of those three Oscar winners with a greeting and gratitude for their years of well done, Oscar-winning hard work.  In that trio, there's Oscar history and history for Women in Film. 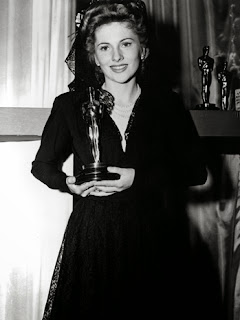