On WHAT A WAY TO GO!

It was just the tonic I needed last weekend to lift my spirits.   I know it's a silly movie but it's good-natured fun -- even if the lead character is widowed a few times during the story.  I wanted to see something in Deluxe color with lots of laughs, big stars and fabulous costumes.  20th Century Fox delivered all that in the 1964 extravaganza, What A Way To Go! starring Shirley MacLaine as the poor little rich girl.  If I programmed a TV channel like TCM (Turner Classic Movies), I'd air this in prime time on April Fools Day.  The story opens on April 1st with a lovely widow, played by Shirley MacLaine, attempting to donate a check for $211 million to the IRS.  Of course, that clerk at the counter thinks it's a joke. 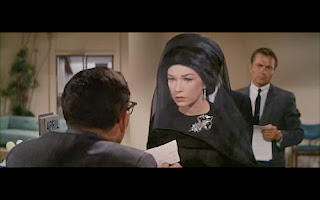 She leave the IRS office then goes to see her therapist.  She believe she's cursed because men marry her, get rich, then kick the bucket in some crazy way.  She doesn't want wealth.  She wants a simple life, the kind of life that Thoreau wrote about in books.  It's been written that 20th Century Fox intended this to star Marilyn Monroe before her untimely death in 1962.  However, it's a better vehicle for Shirley MacLaine with her knowing sideways glance and impish smile.  It glides with her style of physical comedy and musical talents.   One thing I really dig about this movie is her list of co-stars. 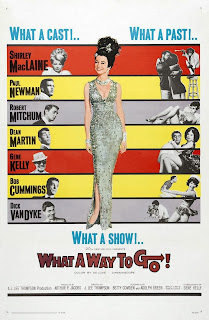 MacLaine teams up once again with Dean Martin.  Those two had definite screen chemistry.  One of the first films she did was the last movie Dean Martin and Jerry Lewis made before they ended their successful comedy partnership.  (MacLaine told me the guys were yelling a lot at each other and arguing off-camera.)  Shirley was Jerry's love interest in Paramount's colorful 1955 comic book comedy, Artists and Models. 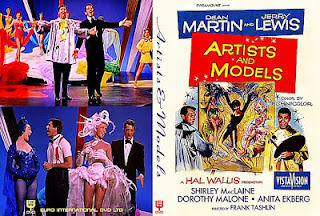 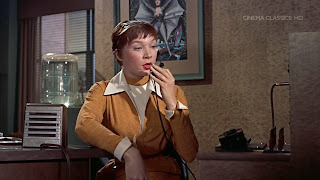 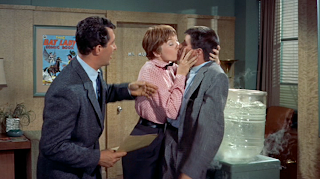 Dean's love interest was played by cool blonde Dorothy Malone.  Dean and Shirley acted together in Vincente Minnelli's drama, Some Came Running, the first of five movies to put Shirley in the running for the Best Actress Academy Award. 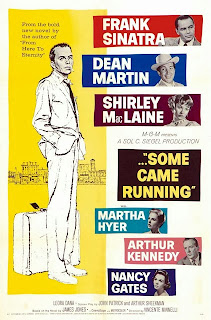 They teamed up dramatically again in Paramount's Career with Dean truly showing his impressive acting chops as the politically blacklisted actor/director.  She played his reckless, alcoholic girlfriend in that strong 1959 show biz drama. 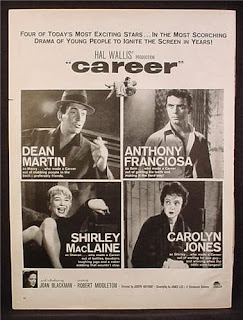 MacLaine and Martin were the stars of a sprightly romantic comedy called All in a Night's Work,  and her funny cameo with him Ocean's 11 is one of the highlights of the Las Vegas caper movie starring Frank Sinatra and his famed Rat Pack.  Their chemistry works again in What A Way To Go!  Nobody played a hot mess of a hipster better than Dino.  He was so excellent at it and such a natural entertainer that, I feel, it often eclipsed his dramatic skills.  He never got the acting accolades that Sinatra did, but Dean Martin was deserving of them.  Lot at his work in Career, Rio Bravo and The Young Lions co-starring Montgomery Clift and Marlon Brando. 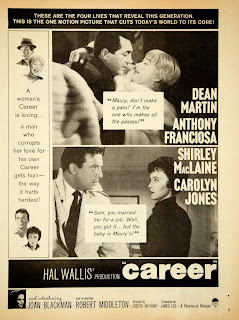 In What A Way To Go!, therapy sessions show us that Louisa (MacLaine) began her disdain for wealth in her youth.  Her battle-ax mother practically shriveled Louisa's father by harping on him about money and success.  Mother bellowed that love was unimportant.  She was played by Margaret Dumont, famed for playing straight woman to Groucho Marx in his best comedy movies.  Dean Martin's rich swingin' bachelor is everything young Louisa doesn't want.  Mother wants Louisa to marry him.  Louisa weds a poor man instead.  This works momma's last good nerve.  There are touches of the kind of screwball comedy that starred Ginger Rogers in the 1940s -- movies in which Ginger could play a girl and have fantasies of married life with Mr. Right.  Think of Ginger in Tom, Dick or Harry and Billy Wilder's The Major and the Minor.  With her big star leading men -- Paul Newman as the constantly eating abstract artist, Robert Mitchum as the workaholic multi-millionaire and Gene Kelly as the world famous egotistical movie star named Pinky Benson -- Shirley MacLaine seems to be having a lot of goofy fun.  They join in the fun.  One of the biggest stars at work in this satire is not seen on-camera.  That's costume designer Edith Head.  She topped herself in this movie and got another one of her many Oscar nominations.  I'm surprised this comedy, with Shirley MacLaine as a one-woman Edith Head fashion show, has not achieved a bigger cult status -- especially in this age of TV's Project Runway and America's Next Top Designer. 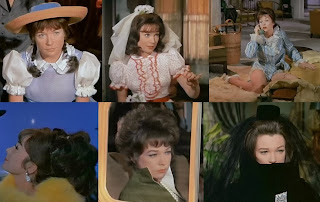 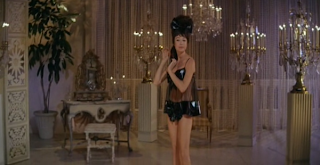 All these fabulous fashions were designed and created for one actress in one film by one designer.  Who is doing stuff like this today?  I love this feel-good, guilty pleasure comedy. 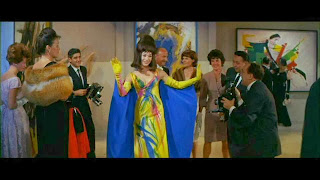 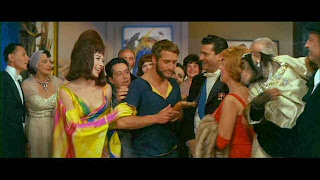 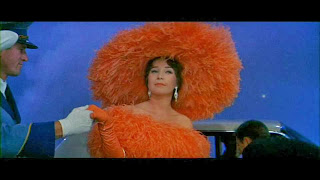 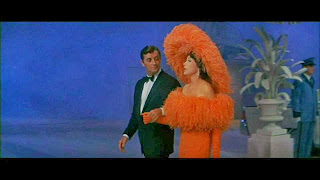 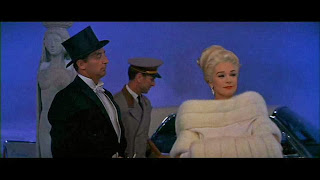 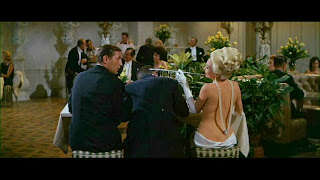 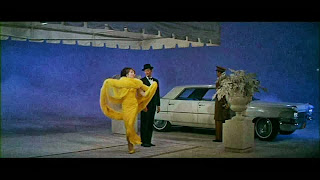 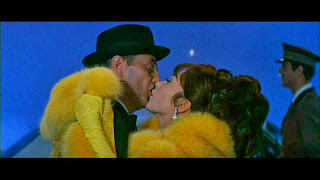 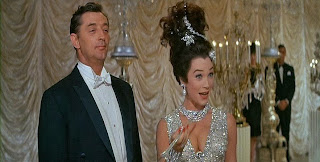 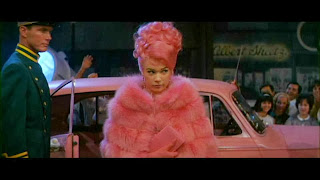 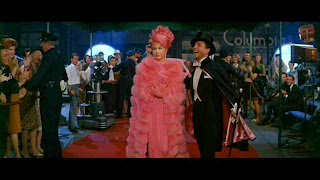 The movies also boasts three Gene Kelly dance numbers.  The big splashy movie musical fantasy number allows Shirley MacLaine to be Gene's partner and remind us that she started her career as a Broadway dancer.  The original songs are good.  Kelly's bar/restaurant number is a sweet catchy tune that would work in cabaret acts today. 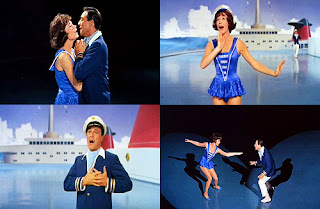 Gene Kelly's ultimate favorite dance partner was his butt.  As usual, her wears tight pants during a dance number and shows off his trim asset.  Gene Kelly was about 50 here.  If I looked that good in my early 50s, I'd have been wearing tight pants too. 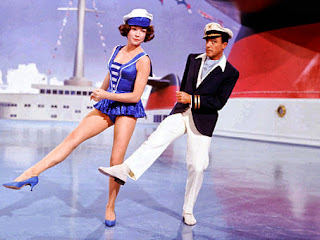 If you're up for a weekend comedy DVD double feature with some things in common, rent What A Way To Go! and the 1949 classic MGM musical comedy, On The Town. 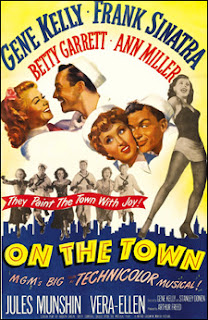 What do they have in common?  Gene Kelly dancing in a nautical outfit, choreography by Gene Kelly, a screenplay and new songs written by Betty Comden and Adolph Green, and hairstyles by Sydney Guilaroff.  Enjoy. 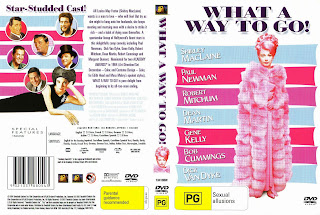