This is a short follow-up for my blog post from last month about Mike Nichols' The Graduate and George Cukor's A Star Is Born.  It focused on the art of the details they put in a frame or a scene, the art of how they composed a shot.  As I wrote previously, George Cukor definitely worked out a color-as-metaphor motif in his musical remake of A Star Is Born.  A stunning comeback vehicle for Judy Garland after a four-year screen absence, this wasn't a musical like the movies that made her a superstar at MGM through the the 1940s.  This was a strong Hollywood-on-Hollywood drama that blended the bold, bright Technicolor of the screen musical with a film noir-ish darkness and shadow.  Alcoholism and physical violence are coupled with true love in the story.  In Cukor's imaginative remake, Esther Blodgett is now a singer with a band.  This gives her musical numbers a realistic setting:  She's onstage performing at a benefit show, she's singing with her band in an after-hours jam session, she's in a TV commercial.  Later, when she's risen to Hollywood stardom, the numbers are in her films or in a film she's shooting.

Esther, the anonymous singer who dreams of having a hit record, is seen mostly in dark blue.  She's backstage, amused at the ruckus being caused by drunken movie star Norman Maine.  Maine is played by the under-appreciated James Mason at the top of his game.  Maine, a headache for the studio publicist, is scheduled to be a headliner at the Shrine Auditorium benefit.  Esther remarks to her friend, the band's pianist and musical arranger, "Mr. Maine is feeling no pain."  She will save Maine onstage.

Because we're familiar with the classic 1937 original, we know that Esther Blodgett will be discovered and become the beloved Hollywood star, Vicki Lester.  The original, starring Janet Gaynor and Fredric March was a straight drama.  Notice in the above photo that the big, vivid display of red is to the left of the frame.  That's the stage.  That's where the stars appear.  Red equals fame.  There's the little red of Esther's boutonniére.  Little red lights above her head.  The red equals fame motif starts in the opening credits. 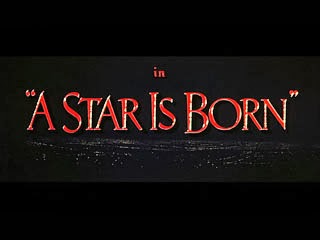 After the benefit, Norman Maine tracks the band and singer down at a little after-hours club in Hollywood.  It's after midnight and Esther singing for herself "and for the boys in the band."  She's singing a torch song, "The Man That Got Away," and she feels the lyrics.  It's a performance of magnetism, charisma and, as Norman Maine will say, "star quality."  In the dark bar, unseen by the singer and the band, he's watched her sing.  He recognizes a great talent.  She sings full-out.  We sense she's known heartbreak by the way she connects to the material.  She wears a navy blue dress with sort of Peter Pan collar and there's sort of a rosy blush behind her.  Stardom approaches.

She and some of the band members are rooming at a complex called Oleander Arms in Hollywood.  They leave for San Francisco in the morning.  Norman must talk to Esther after he sees and hears her sing.  He takes her outside in the parking lot to tell her "You're a great singer."  Her incredulous reply is, "Who?  Me?"  As the famous Hollywood star tells the unknown singer that she's got star quality, notice that Cukor positions Esther so that there are red neon lights from across the street beaming above her head.

Norman seizes the opportunity to give Esther a ride home.  She invites him in to hear the story of her life, which he sincerely wants to hear.  This is a different Norman.  This isn't the babe-chasing boozer we've seen in a Hollywood nightclub on the prowl for some horizontal recreation.  This is a gentlemanly Norman Maine who keeps the young lady's front door open as he reads her scrapbook and listens.  There's some beautiful writing in this screenplay by Moss Hart.  One of my favorite scenes is a simple one that takes place in the Oleander Arms courtyard.  To me, a sign of deep and true affection is when someone believes in you as much as you believe in yourself -- maybe even more so -- and urges you to make your dream bigger.  Norman does that in this scene, which also marks the beginning of his romantic attraction to Esther.  If you've seen the original A Star Is Born or if you've only seen this version, you know that water is a critical element of the last act.

I found this scene on YouTube and I hope it stays posted.  Norman tells Esther to make her dream bigger.  Cukor shows us a more respectful Norman by having the door open.  Notice that, as Esther starts talking, we see a trickle of water through her window.  It's from the pathetic little fountain in the courtyard.  In the composition of the shot, water is between Esther and Norman.  As he tells her, "Don't settle for the little dream, go on to the big one," we'll see that trickle between them when they sit at the fountain. The water is between them as he wants to take another look at her before they say good-bye.
In the last act, water comes between them again after he takes one more look at her.   They are married now in a Hollywood home.  His stardom has dimmed and declined.  The body of water between them, like her work and her fame, has greatly increased.  She contacts the sympathetic head of the movie studio.  She wants to halt her Oscar-winning film career to take care of her alcoholic husband and get him employment again.

When stardom hits Esther Blodgett-now-Vicki Lester, she's in a musical number on the big screen.  How do we know this movie will make her star?  In her first scene, she was an unknown singer wearing a red boutonniére.  Then there was the rosy blush behind her in the after-hours club.  Now the screen behind her is filled with bright red flowers. 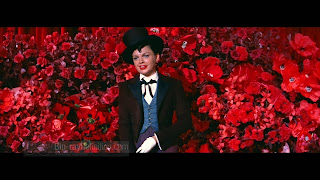 I love Cukor's film literature in A Star Is Born -- what he says with art direction and composition.  Judy Garland and James Mason were Oscar nominees for Best Actress and Best Actor.  "The Man That Got Away" was nominated for Best Song.  George Cukor should've been up for Best Director.  He wasn't. Ironically, William Wellman was up for Best Director.  He directed the original A Star Is Born.  It got Oscar nominations for Best Actress and Best Actor.  It also picked up nominations for Best Director and Best Picture of 1937.  Wellman was nominated for 1954's all-star sky drama The High and The Mighty, a crippled airliner soap opera starring John Wayne that influenced 1980's Airplane!

Cukor got two of the best performances in Hollywood films of the 1950s out of Garland and Mason in A Star Is Born.  The film itself is one of the director's cinematic peaks. 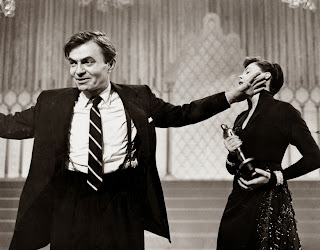 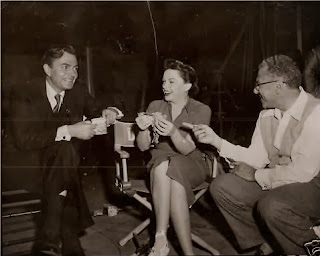 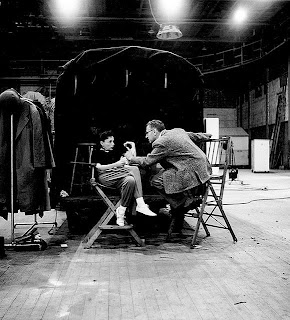 If you can find it, read more about him in the coffee table book, On Cukor by Gavin Lambert and Robert Trachtenberg.
at October 13, 2013