Frank Borzage: In a Different Key

He was stoic with a Ziegfeld Girl in 1941.  Who knew he could be so expressive? 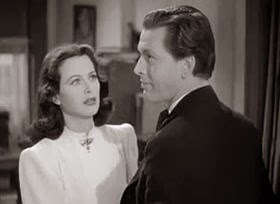 I'm referring to Philip Dorn, star of an old movie that I just saw for the first time over the weekend.  I'd never heard of I've Always Loved You, a 1946 drama directed by Frank Borzage.  There are no real big stars in it.  The biggest star is really Rachmaninoff.  His classical music features prominently in this movie, a bit of a musical departure for Borzage.  If you saw Billy Wilder's The Seven Year Itch starring Marilyn Monroe and Tom Ewell, you've heard Rachmaninoff's music.  It's in the middle-aged husband's fantasy sequences.  He imagines himself playing Rachmaninoff at night to tempt a temptress. 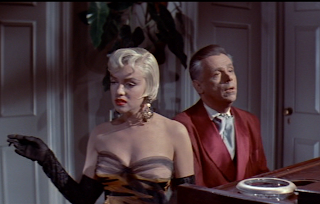 In Borzage's film, we see Dorn as a famous maestro/concert pianist.  Dorn did movies with top stars.  He's the violinist married to Hedy Lamarr's character when she was as a Ziegfeld Girl along with Lana Turner and Judy Garland.  He worked with Irene Dunne in I Remember Mama and he did that great love story, Random Harvest, starring Greer Garson and Ronald Colman.  But the Dutch-born actor never became a major name on movie marquees like a Ronald Colman, a Charles Boyer or a Louis Jourdan. 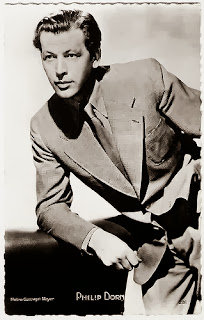 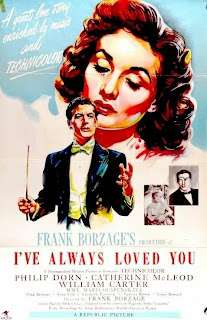 If you see I've Always Loved You, you'll see that A-list studios like MGM missed a good opportunity.  Dorn had leading man skills and he also showed a timing, a flair and a physical energy that would've worked well in comedies of the George Cukor or Howard Hawks variety had he been given the chance.  As a dapper, elegant, talented and chauvinistic maestro, he possesses that ability to make an insult sound charming -- like when he meets the female student who will change his life.  The arrogant and brilliant maestro is auditioning students in competition for a 4-year scholarship.  That's how the film opens.  The first student, a shy male, feels more in tune with Debussy.  The maestro knocks back a slug of whiskey and orders, "Bach."  If that student looks familiar, he was played by the future 4-time Oscar winner, songwriter/composer André Previn. 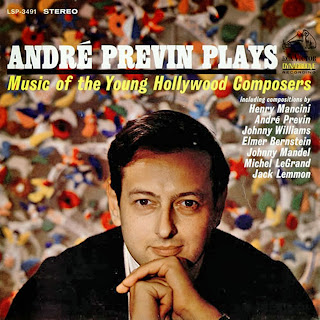 André Previn is mentioned in my previous blog.  He worked on Valley of the Dolls.

A longtime respected friend and fellow musician enters with his protegé.  Myra is polite, quiet and pretty but her politeness and quietness do not mean that she's passive.  She is talented and spirited.  When the maestro, who feels that classical music is basically a man's game, invites her to the piano, he says "You will play for me...and in tune perhaps..."  See what I mean?  A cut delivered with a continental charm.  She changes the game by not caving in to his musical wishes.  She does not play what he wants.

Myra faces him straight in the eye on his level and says, "....I'll play the 'Appassionata' by Beethoven."

The maestro replies, "I dare you."

I replayed that moment about half a dozen times because of Dorn's delicious delivery.  It was so...so Claude Rains.  Myra, of course, accepts the dare -- and she's marvelous. 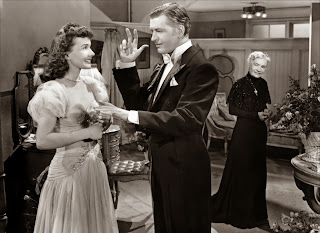 She will be his student.  As artists, they will share the same stage. But his ego demands he must be the master.  Leopold Goronoff, the maestro, and Myra develop an almost telepathic way of communicating with each other in performance.  There's almost an element of mind control to their relationship.  I'd never seen Dorn this physically fluid in a film before, nor had I ever seen him display a nice touch for levity.  This isn't a comedy but he has light moments that show he could've handled one.  He made me laugh.  In his entrance after the opening credits, his attire, his carriage and his manner are reminiscent of Danny Kaye's "Anatole of Paris" number in The Secret Life of Walter Mitty. 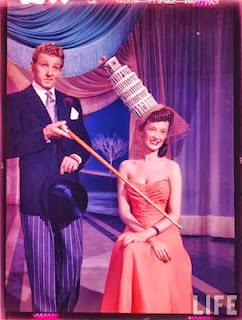 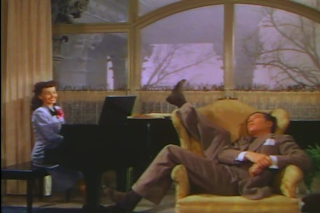 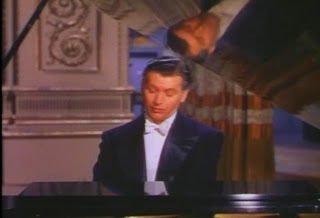 I did not expect to like this movie as much as I did.  It was released by Republic, a smaller studio that obviously put some money into the production.  I've Always Loved You gives us a rare chance to see Maria Ouspenskaya in Technicolor.  She's got the kind of role that only she could play.  She's the maestro's mother.  She likes Myra because she's talented and not another babe that her pianist boy is out to score with -- in a non-musical sense.  Mama knows that her vain, genius son must get over his grand piano-sized ego.  Did you see Cukor's My Fair Lady?  Madame Goronoff is to Leopold what Mrs. Higgins was to Professor Henry Higgins.  Fritz Feld is in it as the maestro's long-suffering, no-nonsense secretary.  Felix Bressart appears as the widower friend who introduces us to Myra.  Bressart played the best friend to Dorn's character in Ziegfeld Girl. 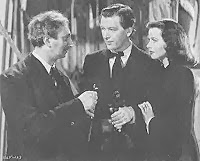 Those three supporting pros -- Ouspenskaya, Feld and Bressart -- knew how to work a scene.  They add to the zest of this movie.

In my favorite Frank Borzage films, he champions "the little man" and there's a sense of spirituality in his direction. Not in the religious sense but in terms of a compassion, a good will that must struggle to break through like grass pushing up through cracks in sidewalk concrete.  There's more at play than just two lovers facing adversity like poverty or war.  Some of my favorite Borzage films are Man's Castle (1933), Little Man, What Now? (1934), History Is Made at Night (1937), Three Comrades (1938) and The Mortal Storm (1940).  Little Man, What Now?, Three Comrades and The Mortal Storm were three of the best dramas Margaret Sullavan made during her early Hollywood years.  The first woman to win the Academy Award for Best Actress was Janet Gaynor.  Gaynor got her Oscar for three films -- Sunrise (1927),  Seventh Heaven (1927) and Street Angel (1928).  Frank Borzage directed Seventh Heaven and Street Angel.  Overall, those are more well-known Borzage films than this 1946 production, but it's worth a look.  By the way, he was the first person to win the Oscar for Best Director.  He won for Seventh Heaven.

In I've Always Loved You, the "little man" is a husband.  George has seen Myra's gifts onstage.  He was in the Carnegie Hall audience to witness her artistry dazzle the crowd. 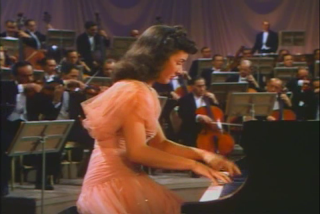 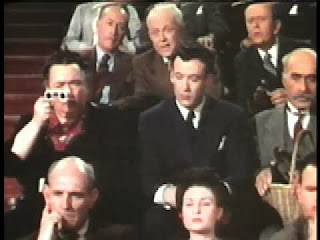 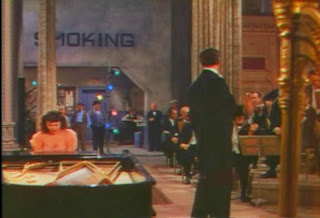 She has captivated audience members and stagehands alike with her musical passion.  George adores and respect her talent.

Myra refuses to let her talent be dominated and overshadowed by the maestro, a man who bellows, "I created her.  She's mine."  When first they met, she found him rude.  Then he took her to Europe as his student.  Her feelings for him softened.  On the stage, she is his match.  She lets her passionate talent out.  Myra plays Rachmaninoff like she's got wildfire in her fingers.  Goronoff's sexist attitude is, "There is no woman in music.  Remember, no woman in music."  He'll later break down and reveal his love for Myra. 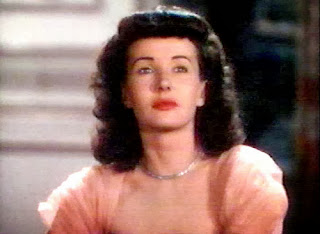 Had this been produced at a bigger studio, like 20th Century Fox, it probably would've reteamed Vincent Price and Gene Tierney as Maestro Goronoff and Myra plus Mark Stevens as George, the husband.  Price and Tierney starred in Fox's Dragonwyck. 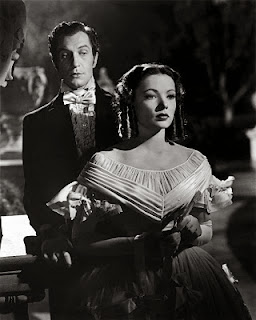 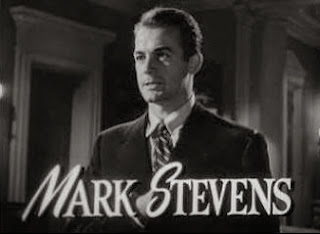 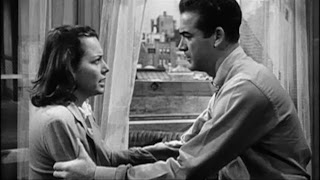 I've Always Loved You present Catherine McLeod as Myra, the sensational classical pianist, and William Carter as George, the "nice boy" from the country. 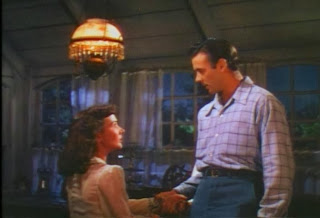 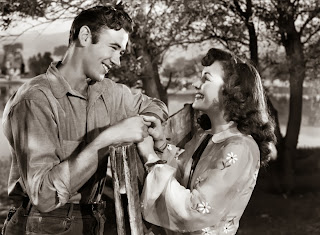 I know.  I'd never heard of them either.  Maybe they had deals with Republic.  Unfortunately, McLeod didn't make it to big movie stardom, like a Gene Tierney, but she was very popular in a 1960s TV commercial.  Baby boomers will know her as the housewife who snapped at her mother before taking Anacin® for a headache.

McLeod's line and the commercial itself gained such pop culture popularity that they were lampooned in network music/comedy variety shows.

Frank Borzage's I've Always Loved You is an interesting and very entertaining film that is worth a look.  In Borzage's world, a woman does not have to choose between married life and a fulfilling career.  Instead, she can have both if she so chooses. 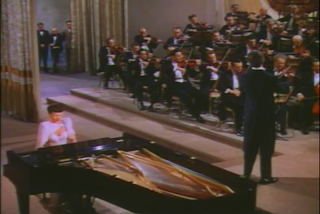 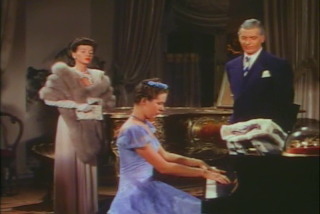 Myra and George have a daughter who also plays piano.  Here, we get another Rachmaninoff and The Seven Year Itch connection.  The middle-aged married man with the itch plans to use the "It shakes you, it quakes you" quality of Rachmaninoff to put The Girl in a romantic mood while his wife and kid escape the Manhattan summer heat for a month.  The Girls upstairs comes downstairs for a drink.  He's really harmless.  Myra's daughter in I've Always Loved You is played by Vanessa Brown.  We saw Brown play the wife to Barry Sullivan's character in Vincente Minnelli's The Bad and The Beautiful. 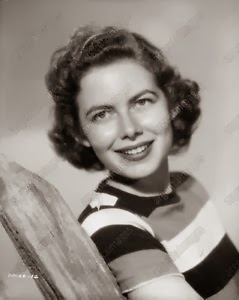 We really remember her as the maid in William Wyler's The Heiress starring Olivia de Havilland.  Vanessa Brown's character get this memorable order from the lady of the house in the powerful climatic scene:  "Bolt the door, Mariah." 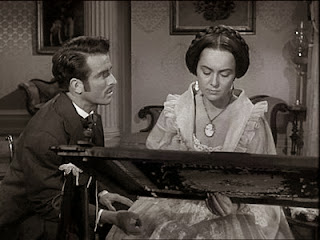 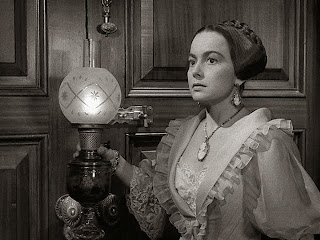 So, what's the Rachmaninoff connection?  After she played Mariah in William Wyler's The Heiress, Vanessa Brown starred on Broadway in The Seven Year Itch opposite Tom Ewell.  She originated the role of The Girl upstairs.  Tom Ewell recreated his role in Billy Wilder's movie.  The material was rewritten as a star vehicle for Marilyn Monroe. 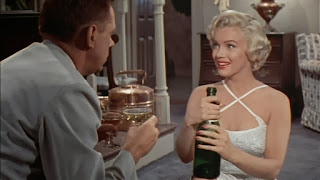 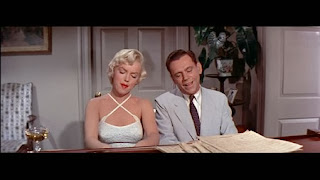 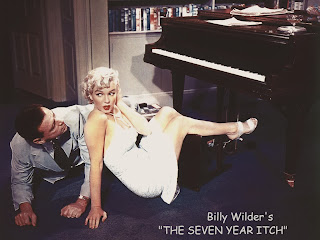 If you're a fan of his work, I recommend seeing Frank Borzage's I've Always Loved You.  This movie has got some zip to it.  Dorn's vivid, colorful performance was a revelation.  The music is fabulous.  The Rachmaninoff music "shakes you" and "quakes you." 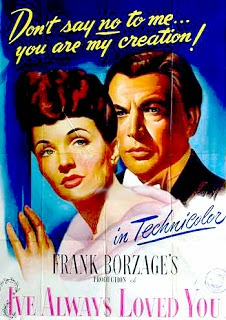 It's no surprise Catherine McLeod didn't really play those classical selections in the movie.  The extraordinary piano dubbing was done by the legendary Arthur Rubinstein.

Has this Borzage feature ever aired on cable's Turner Classic Movies?