This is a new feature, an Amazon Original. Eddie Redmayne and Felicity Jones had that right chemistry together in THE THEORY OF EVERYTHING. He played Stephen Hawking, she played Jane Hawking. We loved seeing how that couple met and how science was always in the air of their lives. Redmayne and Jones reunite and play another couple brought together by science. We go to London in 1862 to meet THE AERONAUTS. Remember when TV had half-hour film review shows hosted by two movie critics who gave opinions of the week's new releases? THE AERONAUTS is a movie that should be reviewed on that kind of show if the two critics were Sam Champion and Al Roker. Eddie Redmayne stars as bachelor James Glaisher, a young man who believes in "advanced weather prediction." In other words, he wants to be a meteorologist. 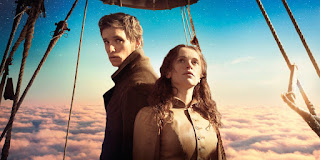 The young scientist is scheduled to go up in a hot air balloon to fly below, in and above the clouds as it ascends. He'll experience and make note of the weather patterns. Traveling with him is Amelia Rennes. At first, she appears to be more entertainer than scientist. She arrives for the trip and wows the crowd with her colorful flair and presentation. She's sort of an 1862 Cyndi Lauper without the music. The two people in the balloon will be opposites in gender and in type. Think of the 1941 screwball comedy, BALL OF FIRE, starring Gary Cooper as a starchy professor who's an encyclopedia writer and Barbara Stanwyck as the hip nightclub singer who winds up as his temporary housemate. She's not a professor, but she's smart enough to teach him a few things. That's a little like the airborne pair in THE AERONAUTS. 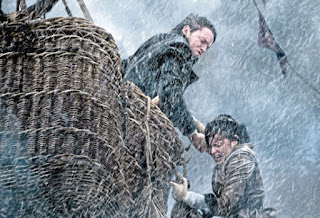 Amelia does have some sharp scientific knowledge. And she's a young widow. This is not a biographical story. The script is a mash-up of different balloon adventures that took place in England around that time and it was tailored to give the woman plenty of action-packed scenes. THE AERONAUTS works as good family fare. It's not THE THEORY OF EVERYTHING. But kids in middle school and younger may take to it because of the thrilling, wonderfully shot action scenes. For grown-ups, it's not exactly as "must-see." Younger movie-watchers will dig the action sequences. There are times when high winds whip to the two around like they're rag dolls. There's danger in the air. Amelia can handle it. That dame has brass ovaries. 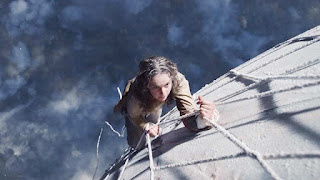 Eddie Redmayne and Felicity Jones are, once again, good together. Here's a trailer.
For all the gutsy, dangerous work Amelia did during the expedition, she should've been invited into that great hall of Stuffy, Bearded British Men. They applauded the young weatherman who believed science should always seek "to find order in chaos" and who embarked on that journey "for the advancement of knowledge and the good of us all."

Amelia should've been invited to receive some of the applause. She saved the weatherman's life. THE AERONAUTS runs 1 hour and 40 minutes.
at December 16, 2019