If you've read or if you've heard glowing reviews for the performance Antonio Banderas delivers in PAIN AND GLORY, written and directed by Pedro Almodóvar, believe them. I saw it this week and I whole-heartedly agree with those reviews. Do not be surprised if you hear his name announced on Monday, January 13th, as an Oscar nominee for Best Actor. 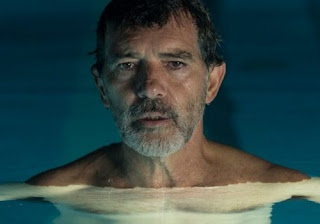 Banderas plays an acclaimed Spanish filmmaker in his 50s. A film he made 32 years ago has been restored and is now considered a classic. He gets offers to make personal appearances. With all that glory being heaped on him from film fans, he's endures the aches and pains of aging. There's back pain, front pain, headaches and heartbreak. Aging, art, love, loss and addiction are elements in this well-told, beautifully-acted film that occasionally takes us back to the director's poor childhood. Memories of his mother, a reunion with the actor he has not spoken to since they made that film 32 years ago, a visit from his first boyfriend of his young adult years in Madrid, and an invite from an art gallery -- some of those experiences push him to a new addiction, some could pull him back from it. There's a melancholy void in the present life of filmmaker Salvador Mallo. Can he overcome it? Will he create again? That's PAIN AND GLORY. 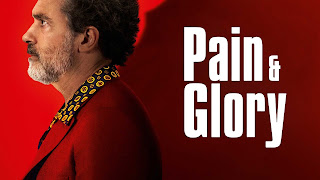 When I got my first New York City TV job offer and moved there in 1985, not only was I ecstatic about the job, I was also ecstatic to be in a city with no shortage of movie theaters. I could watch movies -- domestic and foreign, new and classic ones I'd never seen. I saw Almodóvar's LAW OF DESIRE starring Antonio Banderas at a cinema in 1987. It hit my senses like a day at Disneyland. Almodóvar's work was a whole new world of cinema to me. I've been a Banderas fan ever since that day. I feel that what Scorsese has been to Robert de Niro, what director Vittorio De Sica was to Sophia Loren, that is what Pedro Almodóvar is to Antonio Banderas. The filmmaker distills the essence of that particular actor. Their other collaborations include WOMEN ON THE VERGE OF A NERVOUS BREAKDOWN (1988), TIE ME UP! TIE ME DOWN! (1989) and THE SKIN I LIVE IN (2011).  Banderas gives a terrific performance. You'll feel the journey his wounded spirit takes. You feel those things that choke his emotions. Here's a trailer.
Banderas is not the only actor who gives a praiseworthy performance in PAIN AND GLORY. There's Penélope Cruz as the younger poor village mother whose sweet, smart and unselfish little boy loves to look at photos of movie stars such as Betty Hutton, Tyrone Power and Donna Reed. At the cinema, his teen dreams were colored by Natalie Wood and Marilyn Monroe. Asier Etxeandia is excellent as the undisciplined but talented actor who argued with the director when they made that 1980s film which is now considered a classic. They had not spoken to each other since then. He's still a bit reckless. But he's still talented. 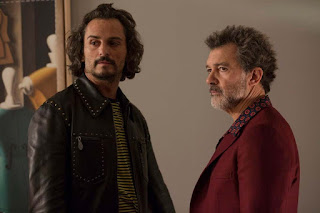 PAIN AND GLORY runs a little under 2 hours. I think Fellini would have loved this film.  I enthusiastically recommend it to mature Almodóvar fans.