About A BEAUTIFUL DAY IN THE NEIGHBORHOOD

If you're one of the few people who has followed my blog posts for a few years, you know that the work of Tom Hanks holds a very dear place in my heart. I have been a hardcore Tom Hanks fan ever since the early days of my first professional TV job. That was at the ABC affiliate in Milwaukee. When I saw Hanks in drag, looking like a young Ruth Roman, when the sitcom BOSOM BUDDIES premiered on ABC in 1980, I was hooked. I've had the unforgettable opportunity to interview him. In 1994, his kindness on-camera helped me through one of the saddest days of my life. One hour before our interview, I got a call from my partner's doctor at Mount Sinai hospital in New York City that he was not responding to any more of his AIDS medical treatment. She felt the end was near and that I should contact his parents. I was about cancel my FORREST GUMP interview with Mr. Hanks until my partner's doctor added, "Richard is adamant that he does not want you to come to the hospital until after you've done your work." In December 1999, Tom Hanks gave me one of the happiest experiences of my TV career. I was host of a local cable show in Manhattan that focused on new film releases, domestic and foreign. I loved that show and the crew. Our little ragtag crew got permission to be on the red carpet for the premiere of THE GREEN MILE at the Ziegfeld Theater. We did not expect to get interviews, although we had microphones at the ready. Our main goal was to get footage of the stars walking the carpet to use at the end of our holiday edition show. Think of a commercial airline. We were placed in the last five row of the economy section. I was wearing a fleece jacket and a Santa hat. Tom Hanks and Rita Wilson spotted me. He walked by the first class and business section to come give me a hug in economy. We got that on-camera. I was so touched and thrilled, I could hardly speak. Yes, Tom Hanks holds very dear place in my heart. 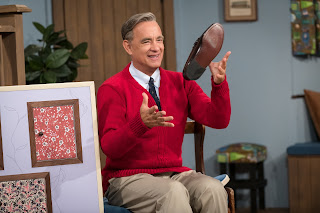 When I read early reports that he'd be playing Mister Rogers, the beloved Fred Rogers, in a new movie, even I was concerned. How could a biopic match the excellence and poignancy of the 2018 documentary, WON'T YOU BE MY NEIGHBOR? I am still stunned at the fact that wonderful documentary did not get an Oscar nomination.

Well, Tom Hanks does play Fred Rogers in A BEAUTIFUL DAY IN THE NEIGHBORHOOD but it is not a biopic. It's based on a true 1998 story. Rogers is more of a significant supporting character in it. A BEAUTIFUL DAY IN THE NEIGHBORHOOD is based a true story involving a national magazine writer assigned to interview the TV host. The writer balked at the assignment. The real writer's name has been changed to "Lloyd Vogel" for the movie. The writer's work always has a taste of sourness towards humanity. His relationship with his father is in such a bad state that he punched his dad out at a wedding reception and he took a serious blow to the face that he tells co-workers resulted from an accident during a sports activity. The journalist's life will be changed as he spends time with Fred Rogers. A BEAUTIFUL DAY IN THE NEIGHBORHOOD is about forgiveness, kindness and doing the work to make yourself a better person. It's about acknowledging one's inner scars. As Fred Rogers says to Lloyd Vogel, "There's no normal life that is free from pain." 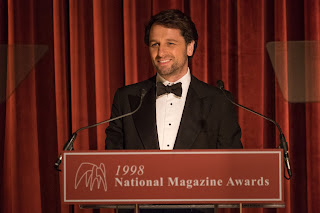 In this movie, we see a Fred Rogers who occasionally irritates his TV crew. When Lloyd Vogel makes his first visit to the children's show TV set, crew members are annoyed because the shoot is running one hour behind schedule. But Fred Rogers has his own pace, his own rhythm. He knows what he's doing -- and he does it. He takes his work seriously.  In suspicious and bruised Lloyd, Rogers detects an unspoken heartache. Eventually, he will meet Lloyd's loving and concerned wife, their baby and Lloyd's alcoholic, ailing father. He will give them all the same heartfelt, compassionate attention he gives children on his show.

A BEAUTIFUL DAY IN THE NEIGHBORHOOD was directed by Marielle Heller. She directed Melissa McCarthy and Richard E. Grant to Oscar nominations for 2018's CAN YOU EVER FORGIVE ME? That film, like A BEAUTIFUL DAY IN THE NEIGHBORHOOD, focuses on real-life misfit writers on the ultimate island of misfit toys -- Manhattan. Both writers have soured on people. Both are angry. Both are talented but behave irresponsibly. Heller gives her new film a gentle yet meaningful tone. Just like Mister Rogers' TV show, it's simple, without frills, and allows space for silence -- silence that has emotional gravity. Characters are allowed to think, to listen to the voice of their own souls. There are moments during conversations when you actually hear a clock ticking in the background before a reply is spoken. To me, Tom Hanks gives a masterful performance. He submerges into the carriage and body language of Fred Rogers. He gets his cadence of speech and the different emotions behind the eyes. This TV host is a man who also has his angers. 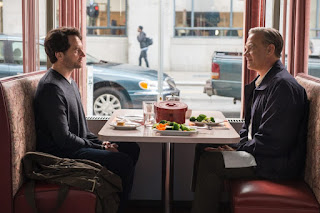 The performance is brave one for Hanks. He stretched himself as an actor. I read years ago in a magazine interview that he confessed to having a fear of singing in public. As Fred Rogers, he has to sing about 4 or 5 tunes. And Fred Rogers didn't just sing nursery rhymes. He sang original tunes that had a definite light jazz beat. Matthew Rhys, the Welsh actor who was on the TV drama series, THE AMERICANS, stars as the American magazine writer. He's the lead actor in the film.  Here's a trailer.
Chris Cooper is also first-rate as the alcoholic father seeking redemption from his grown son. Marielle Heller's graceful film has a message our world sorely needs right now.  For Tom Hanks fans, A BEAUTIFUL DAY IN THE NEIGHBORHOOD is a must-see. I think the performance could land him in the Best Supporting Actor Oscar race next month.

If you'd like to see my unexpected red carpet with Tom Hanks in December 1999, watch this reel. Happy Holidays.