"There must be more money." The London house seems to whisper that greedy statement at night. The sweet little boy who lives in the house hears the whispers and feels it's his duty to do something about it. He feels it's his duty to get more money for his vain, irresponsible, lovely mother. He'll make her happy by picking winners at the racetrack. He'll pick them with the help of a hobby horse he got for Christmas. 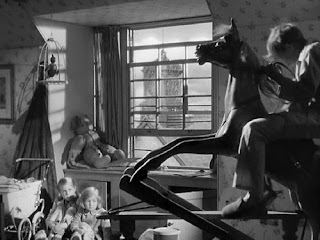 THE ROCKING HORSE WINNER fascinates me. I first discovered it in the 1990s when I was a clerk in a New York City video store. I watched it again recently and it still packs a punch. Parents often forget that their marital discord, even if they try to hide it, sends out a certain energy to young children in the household. They pick it up. I remember my parents' discussions about bills and the need for more money. Young children absorb that energy, that domestic dissonance. It's not their responsibility to fix it, but good kids will often try. When they do, they sacrifice some of the carefree quality of childhood which they should be allowed to have. They're not emotionally prepared to handle a grown-up's frustrations. Children can often be burdened by carrying the weight of a parent's frozen dreams. Such a child is Paul. He's been emotionally abandoned by his parents. That will lead to a strange obsession. 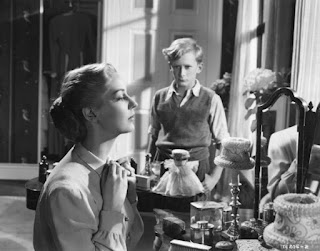 A 1949 black and white British drama, THE ROCKING HORSE WINNER is based on a story by D.H. Lawrence. The movie opens with what looks like the perfect image of a snow-covered suburban neighborhood at Christmas. It's like a scene on display in a department store window. The inside of the house is pleasant, but shadows of the balustrades make you think of prison bars. Young Paul is in a domestic prison. This is a Christmas noir tale.  Paul's upscale, well-dressed parents present an image of privilege and gracious living but they're really broke. Father gambles. Mother puts having new gowns before her three children's needs. Neither has a job. Mother is a material girl. She borrows from her brother and spends. Paul's parents want to be popular on the social scene. Instead of being responsible and getting jobs, they argue over the fact that "There must be more money" because they're in debt. Paul hears the constant chorus of "There must be more money." He's the slim, lovable adolescent, the older sibling to two little ones. The only person who pays attention to him fully and treats him like a buddy is Bassett, the kind and caring handyman who has a leg injury from service in the war. Bassett loves horses. He loves Paul. He's played by John Mills. 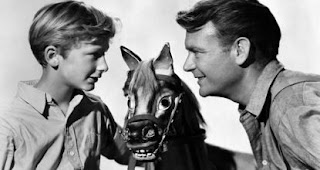 Paul gets a rocking horse for Christmas. The horse has a slightly abstract, slightly wild expression painted on giving it a look that's funny yet also a bit demented. Alone in a room at night, Paul rides the horse faster and faster. He rides as if in a trance with an almost fetish-like, erotic frenzy. He gets telepathic messages telling him what horses will win at the racetrack. He gives Bassett the names and pleads with him to bet on those horses. Bassett does. The horses always win and he always turns all the money over to Paul. The boy's uncle does the same. Paul saves the money in a box to give to his parents so the house will stop whispering "There must be more money." Paul sacrifices his childhood -- and emotional health -- to makes his parents happy. Mother and Father are free of debt and now attend posh society affairs. But will they ever notice that their boy is in psychological distress? Will he become more important to them than luxury items? Will they stop exploiting his gift? Watch this tense psychological drama and see. 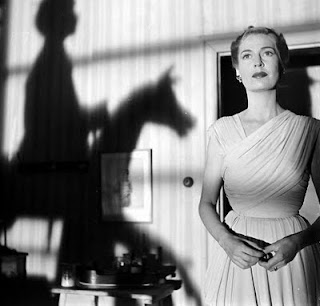