Awkwafina in THE FAREWELL

It was well after midnight. I wasn't sleepy. So, I decided to try some Wang action. That's director and screenwriter Lulu Wang. I stayed up and watched her movie, THE FAREWELL. Even though it's about Chinese relatives in New York who fly to China for a family gathering, I got teary-eyed during this touching film because it made me think of my mother. If you saw that glossy, highly entertaining romantic comedy called CRAZY RICH ASIANS, you know that Awkwafina stole every single scene she was in as the funny and hip best friend to the lead female character. She was also totally cool as one of the ladies who pulled off a major jewel heist in OCEAN'S 8. Awkwafina stars as Billi, the China-born, America-raised New Yorker. Starting her day in New York, she's on the phone talking to her grandmother in China. She calls her grandmother "Nai Nai." The two love each other a lot. Billi endures the usual ups and downs most New Yorkers do. In her case, she had her heart set on a fellowship grant that she didn't get. She has dinner with her parents. They have a couple of white friends over and all have a good time. But, when company's gone, Billie senses something is wrong. Is her dad drinking again? No. It's not that. Her grandmother has cancer. Billi's parents break the news to her and add that they are going to China for her cousin's wedding. That's sort of the "press release" reason for the trip. There is going to be a wedding but their main reason is to see grandmom, dad's mother. Doctors think she has only 3 months or a little less to live. The parents fly over and are in Nai Nai's home with other relatives when -- Billie unexpectedly arrives. 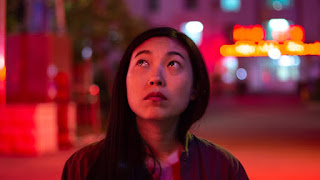 She is dealing with an aspect of her Chinese culture her parents told her about when they broke the news at home. No one is telling Nai Nai of her illness. That's the Chinese way. That is why the film opens with this line on the screen -- "Based on an actual lie." THE FAREWELL is based on an experience in the director's real life. 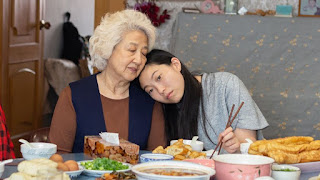 At first, we're nervous. Will Billi blurt out the secret? No. We're no longer nervous but we feel her emotional pain. We feel it especially when we see how dear the relationship is between granddaughter and grandmother. Nai Nai wants to know what her children and grandchildren are up to, but she's not meddlesome. She can be a bit bossy, but there's a basic sweetness about her. She's warm and lovable. That's what made me teary-eyed. She reminded me of my mother. Mom passed away in 2017.

There were losses as Billi's family gained new things. She remembers the house in Beijing from when she was a little girl. It's now gone. Dad now considers himself a New Yorker. It's been 20 years since he was in China. 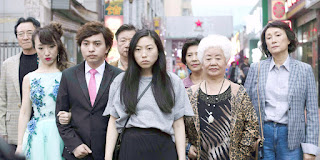 Family. You may not see them every week or every year. Occasionally, some of them may seem like absolute strangers. Still, they are your roots. They form the blueprint for your life. The reality that things and people we love can be gone suddenly is a shock. But perhaps it's a shock we need. It's a jolt to call out the toxins and let in some fresh air. It's a shock that stops one from taking things and people for granted. As Billi, Awkwafina has a poignant moment talking about "catching dragonflies" that knocked me out.  She has made me laugh a lot in previous performances. I was unprepared for her dramatic depth. She's excellent in this understated, complicated family story. Here's a trailer for THE FAREWELL.
Brava, Director Lulu Wang. Never does her story get maudlin or shmaltzy. The humor never seems forced. The family love and family heartbreak feel real.

I wanted to hug Zhao Shuzhen who is wonderful as Nai Nai. Actor Tzi Ma will be recognizable from lots of TV shows and the RUSH HOUR movies. He is at his best as the Chinese-New Yorker dad who struggles with trying to keep a foot in each culture. The big revelation here is the remarkable and moving performance by Awkwafina. Today, it brought her a Golden Globe nomination for Best Actress in a Musical or Comedy. THE FAREWELL runs 98 minutes.
at December 09, 2019