On Netflix, THE SAPPHIRES

I wanted to see a movie. Something entertaining and warm that I'd not already seen. And I wanted it to be under 2 hours in running time. Well, I found it -- on Netflix. It's a movie that I'd heard about five years ago and it had hooked my attention. I'd read that it was made for about $9 million in Australia and made $20 million at the Australian box office. Also, it took home top prizes from the AACTA Awards (Australian Academy of Cinema and Television Arts). Those are the Aussie version of our Academy Awards. The 2012 comedy/drama is called THE SAPPHIRES and the screenplay is based on some real-life characters on a major adventure in 1968.  Apparently, THE SAPPHIRES opened in New York City in March of 2013. It got little press and U.S moviegoers missed it. This is the kind of thing that really puts a knot in my shorts. If I had been employed in TV or radio in 2013 and in New York City, I would've enthusiastically recommended THE SAPPHIRES as a great date night movie. But I wasn't. I had national TV and radio jobs between 2000 and 2008 in New York City. However, when some of my buddies assumed I was making big bucks, my annual salaries during those years ranged from $44,000 to $60,000. I lived modestly and used my emergency fund to help my mother was who, at the time, was in a serious condition. I was on a show that got cancelled in 2008 right when the Recession started spewing fire like a dragon. I could not find work. Broadcast agents turned me down for representation (as they had been since 2000 even when I was on weekly national TV), I lost my longtime studio apartment and many of my belongings in it. In a way, I've been on the road ever since. I am still passionate about films and, honestly, there are times when my soul needs some warm movie entertainment to brighten my spirits. Which brings me back to THE SAPPHIRES. We follow four young Black Australian women who form a singing group and then get booked to do USO-type shows for the troops in Vietnam. I think some entertainment press reporters may have described this as sort of a "down under" DREAMGIRLS. But it's not. 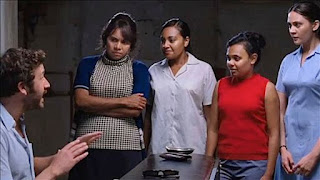 Did you see the hit 2011 comedy, BRIDEMAIDS? Remember the Milwaukee cop with the non-Milwaukee accent who falls for the Kristen Wiig character? He was played by actor Chris O'Dowd. After BRIDESMAIDS, which was a major box office hit here in the U.S., Chris O'Dowd won the Best Actor AACTA Award for 2012's THE SAPPHIRES and the movie won for Best Film. I don't think that was mentioned by American press when it opened here. If I'd been on TV or radio, I would've mentioned that because millions of moviegoers saw O'Dowd in BRIDESMAIDS. 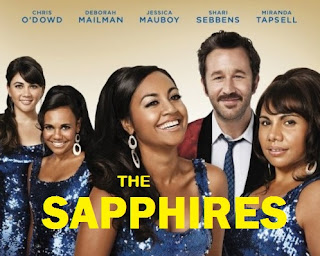 Here's why THE SAPPHIRES not a "down under" DREAMGIRLS. The movie begins with a few printed lines onscreen about racial history in Australia. That history stinks. Until 1967, Australia's native Aboriginal population was denied full citizenship by the Australian government. The Aborigines are Australia's Black people. Not only were they segregated, they were put into the same category as animals and plant life.  Then you read what the government did to light-skinned Aborigine children, kids who were so light-skinned that they could pass for white.

The action starts in the outback. We see some really cool Aborigines and friends living their lives. Three Black girls love to sing. They sing country & western tunes. They enter an amateur contest in town -- and lose. The emcee is a dude who pretty much lives in his car. He's Dave Lovelace (Chris O'Dowd). He digs the girls who lost and feels that they lost because they're Black. He talks to them, learns that they want to play for the troops in Vietnam and wisely tells them to add some funk to their repertoire. Stop with the country & western tunes. Embrace Otis Redding, Sam Cooke and James Brown. Says Dave, "If you wanna perform for the brothers in Vietnam, you gotta give 'em soul." 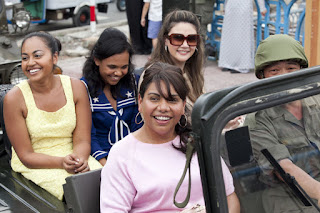 He's now their manager. He makes changes. Defensive and argumentative Gail has been the lead singer. He makes another girl the lead singer. Gail is miffed and you know she thinks it's because the other girl is prettier (like in DREAMGIRLS). It is not. It's because the other girl's voice is better and no one knew how to break it to Gail. Gail is good enough to be in the quartet but she's not good enough to be the lead. Dave knows they have to go into their audition being terrific and not just ok.

There's the fourth voice the girls need. She's been accused of being a "coconut" -- acting like she's white on the inside. She's light-skinned and has passed for white. When you know all of this, you can understand why watching the news about Dr. Martin Luther King on TV was just as important to these four Australian women as it was to Black Americans soldiers in Saigon. Dave, by the way, was right. Nothing wrong with country & western. But when The Sapphires discover Motown, the act takes off. Here's a clip from THE SAPPHIRES now available on Netflix.

There are lessons learned about friendship, race, love and soul music in THE SAPPHIRES. This film started off as a popular play in Australia. You see lovely photos of the four women who inspired the play and film in the closing credits. This warm-hearted movie runs about 1 hour 45 minutes -- and it put a smile on my face. Happy Holidays.
at December 22, 2019