Last month, I wrote blog pieces about two of the 1950s films directed by British Oscar winner Muriel Box. The films I wrote about were CASH ON DELIVERY, a lively comedy starring Shelley Winters, and EYEWITNESS, a crime thriller. I've also seen SIMON AND LAURA, the 1955 comedy directed by Muriel Box about a constantly bickering pair of married actors who take a BBC TV job as hosts of their own live reality TV show. They're so broke, they need the money. However, on the air, they must pretend to be a happily married couple. SIMON AND LAURA starred Peter Finch and Kay Kendall. Recently, I saw another very entertaining 1950s film directed by Muriel Box. STREET CORNER is a 1953 drama focusing on the work lives of policewomen in Great Britain. We also look at the lives of females taken into the station by those policewomen. 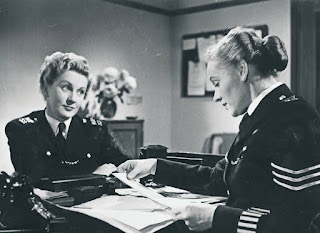 In an earlier post, I wrote that Muriel Box needs to be included in our American discussion of female filmmakers. Her work is overlooked here probably because film critics were not warm to her accomplishments as a director in the 1950s. I'm positive the cold reception was absolute sexism. In the 1950s, popular Hollywood screen actress Ida Lupino continued to act and went behind the camera as a director. She was a trailblazer in the male-dominated Hollywood field of film directors.  Muriel Box and her then-husband, Sydney Box, had won Oscars. Their British psychological drama starring James Mason, THE SEVENTH VEIL, won the Oscar for Best Original Screenplay in 1947. In 1949, she went behind the camera and directed her first feature film. In her writing and directing, she loved to present the female experience. STREET CORNER is a rich example of that. In my article on EYEWITNESS, Muriel Box in Britain -- as Ida Lupino did in Hollywood -- got behind the camera and proved women could direct dramas that had action and suspense. EYEWITNESS didn't have any British stars who were also stars in the U.S. However, if that screenplay had been at 20th Century Fox in the 50s, it would've starred Jean Peters or Jeanne Crain. After I saw STREET CORNER, I wished Muriel Box had been invited to go to 20th Century Fox in Hollywood and direct a film or two or three with Jean Peters, Jeanne Crain, Linda Darnell, Marilyn Monroe or Dorothy Dandridge. Her directing style is marked with confidence, good pacing, wit, regard for women and regard for audiences. In STREET CORNER, the amount of speaking roles for females and the amount of women seen as background actors is plentiful. Even by today's film industry standards, the gender representation in this 1953 black and white drama would make women smile.

The story opens at night. Two female police officers are walking the beat by the Thames. The officers pass a couple, a man and a woman who are romantically involved. Suddenly, there's drama. A little boy has fallen into the water. He can't swim. The woman tells her boyfriend to get the two female cops as she dives in to save the boy. The heroic woman and her boyfriend are taken to the station by the policewomen. The couple did nothing wrong. The cops learn that the couple is broke, got evicted and has no place to stay that night. The policewomen will help. They'll help even more when it's discovered the woman is in the military. We follow her back on the Army base. Now the film has two sets of women in uniform -- the policewomen and the Army women on the base. The heroic woman in the military has a story. She committed bigamy. The man with her by the river is the poor man she loves and almost lost due to illness. We learn why she was married to two men. Box doesn't focus on the mistake the female made. She brings us into why she made it.

The next female in need of policewoman help is an abused toddler. Two policewomen are on duty in a poor part of town to check on a child and an irresponsible mother. While getting info from neighborhood women, the cops see that the child is in danger. They race upstairs to break into the apartment, This exciting scene comes in the first 15 minutes of STREET CORNER, as did the scene of the little boy being saved from drowning. Director Muriel Box needed to be saved from Britain's gender bigotry that eclipsed her 1950s film career achievements. 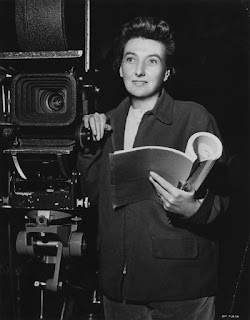 The third female we follow with the cops is played by blonde, beautiful Peggy Cummins. She was a star on both sides of the pond. Cummins had a sweet role in Muriel Box's comedy, CASH ON DELIVERY, with Shelley Winters. American moviegoers loved Cummins as the sharp shooter film noir femme fatale in 1950's GUN CRAZY. In STREET CORNER, she's an 18 year old mother. Her husband married her when it was discovered she was pregnant. He's away trying to make money. She gets busted for shoplifting baby clothes. Her witch of a mother-in-law keeps the baby and throws her out, calling her a "slut." The young mother gets innocently involved with a slick dude, not realizing he's a hoodlum. He's a crook who pulls off a big robbery. 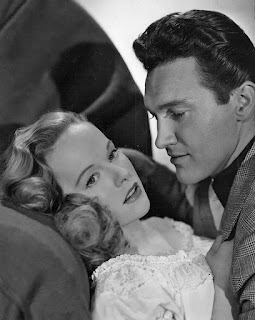 The policewomen discuss work, marriage, having children and one happily announces she's off to get her hair done. Another has survived a great personal tragedy.

We follow policewomen handling those three cases, handling them in uniform and in undercover clothing. These are steak-and-potatoes, independent working class women who do good work, are proud of the work they do, yet have to endure a bit of sexism from within the force. One male cop who feels females shouldn't be on the force because women are "flighty, impetuous, undependable" will have a major change of heart in the film's final crime-fighting action scene. 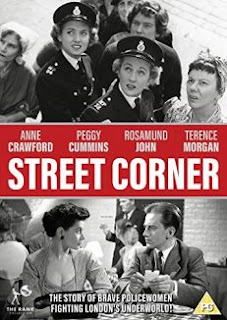 STREET CORNER was also titled BOTH SIDES OF THE LAW. Muriel Box directed the 95-minute film with skillful economy and energy. She co-wrote the screenplay with her husband, Sydney Box. This movie is worth a look. Her career as a film director is film history worth noting. Muriel Box died in 1991 at age 85.
at December 10, 2019