Have You Seen PARASITE?

Oh my goodness, what a movie. This is the Korean film written and directed by Bong Joon-ho. If I had to submit my Top Ten of 2019 list of films to a major publication, PARASITE would be on the list. I will not reveal much about PARASITE because I do not want to ruin it for you. I will tell you to be prepared for scenes that range from slapstick to shocking. The other Bong Joon-ho films I've seen, the sci-fi thriller THE HOST (2006) and the sci-fi tinged OKJA (2017) are stories with characters who have family ties. PARASITE is no exception. 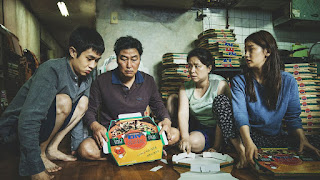 Did you the film classic, ALL ABOUT EVE? Bette Davis played the Broadway legend who unselfishly opens her home to an unemployed aspiring actress who turns out to be a conniving witch. If you saw that 1950 classic, think of a low-income family of Eve Harrington types who ingratiate themselves into the lives and home of an upper-class couple -- rich folks like Broadway star Margo Channing. Like Eve Harrington, these family members are all impressively talented in some way. They've got sharp minds but basically use their minds like slacker con artists. The rich married couple shows why the rich need the lower working classes. Cooking, cleaning, food shopping. Those are things the rich cannot, will not do by themselves or for themselves. The brainy, low-income family that lives in a basement in a raggedy part of town poses as unrelated people and pull a fast. First,  they manipulate the longtime housekeeper to quit. Then they individually get hired as new domestic staff members. We are posed with this question: Who are the parasites? The poor folks now with access to privileges in the upper class modern house or the upper class folks who will be polite but never quite treat them as equals? Things change when the wealthy family leaves for a short trip. 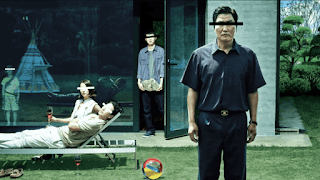 One thing to notice about director Boon Joon-ho's literature of film. Notice that when the poor family successfully pulls off its scheme and lands well above street level in a large, expensive Architectural Digest-like house, something keeps forcing them downstairs as if they're banished to the underworld. Only when one member talks about getting employment and earning money in a legit way do we see that character walking upstairs in a comfortable situation.

This is a Korean film and it's subtitled. I could easily see this story taking place in Northern California with the poor family having been forced out of its longtime address in Oakland due to gentrification and escalating rents. I could see those family members ingratiate themselves into the lives and home of a high-tone family in nearby San Francisco. 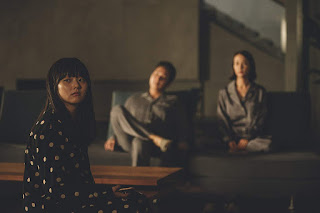 Here's a trailer for PARASITE. It runs a stylish and thrilling 2 hours and 12 minutes. I dare you not to gasp like I did during the last half-hour. Brilliant filmmaking.