He's a smart, funny, handsome man. A brown-skinned native New Zealander, he's the son of a Maori father and a Jewish mother. He describes himself as "a Polynesian Jew." He's actor/comedian Taika Waititi, the talented man who directed JOJO RABBIT and adapted the screenplay from the novel CAGING SKIES by Christine Leunens. The movie takes us back to the war-torn 1940s. Jojo Betzler is a lonely, impressionable 10 year old German boy who has joined the Hitler Youth Program. Jojo has no father in his life. Only a mother. His father figure, of sorts, is his imaginary friend and life coach. His name is...Adolf. 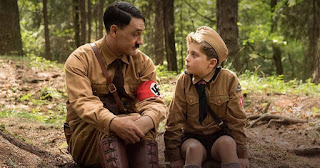 Taiki Waititi plays Adolf. I read film center Twitter post in which JOJO RABBIT was reviewed as "hilarious, heartwarming and heartbreaking." I agree with that review. I don't agree with a couple of others -- both from esteemed, veteran film critics. Nazis are spoofed in JOJO RABBIT. Film director Ernst Lubitsch spoofed Nazis in his 1942 comedy, TO BE OR NOT TO BE, starring Carole Lombard and Jack Benny. Today, it's considered a classic. When it opened, it flopped. While it was in production in late 1941, Pearl Harbor was attacked and then Germany declared war on America. TO BE OR NOT TO BE was an independent film release. Top Hollywood studios were nervous about producing a comedy that poked fun at Nazis even though filmmaker Charlie Chaplin had done just that in THE GREAT DICTATOR, an Oscar nominee for Best Picture of 1940. A young Mel Brooks obviously was a big fan of Lubitsch's TO BE OR NOT TO BE. 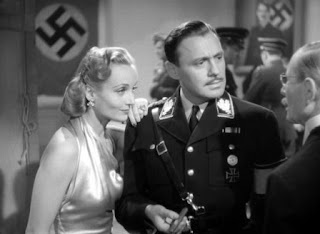 Brooks lifted a line and used it in his 1967 comedy, THE PRODUCERS. The "Heil myself" line went into the play that stunned Broadway theatergoers with its "Springtime for Hitler" musical number. Mel Brooks won the Oscar for Best Original Screenplay. 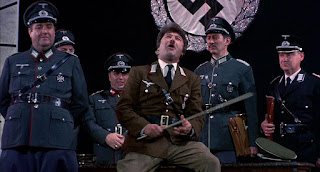 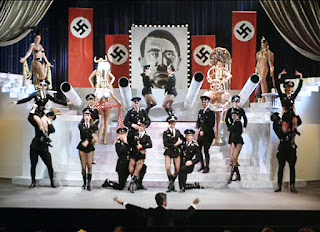 In 1983, Mel Brooks and his wife, Anne Bancroft, starred in a 1983 remake of Lubitsch's 1941 film. They took on the Carole Lombard and Jack Benny roles. 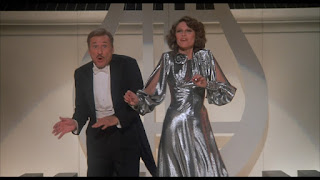 Little Jojo is just a boy who longs to join a club that will let him have a gun and use it so he can prove his masculinity. In this sense, Jojo is just like the real-life Marine Jake Gyllenhaal played in the 2005 biographical war drama, JARHEAD. Taiki Waititi's JOJO RABBIT is an anti-hate and anti-fascism tale that shows how susceptible young minds can be to propaganda and distorted, imbalanced views of the world. It's a plea for the strength to embrace tolerance. Jojo is teased by older boys at Hitler Youth training camp because he doesn't have the toughness to kill a rabbit. And then there's that imaginary friend of his. As if that's not enough, Jojo learns that his mother has hidden a Jew in the attic. This tough Jewish girl is like a warrior Anne Frank. Here's a trailer.

I broke up laughing in the first five minutes at the absurd, cartoonish and frightening imaginary friendship that has Hitler talking to the kid like he's a workout bro at the gym -- "Heil me, man!" When Jojo sees how quickly the girl in the attic moves, Adolf remarks unhappily that she's "like a little female Jewish Jesse Owens." I laughed. Later I was shocked and I was deeply touched. 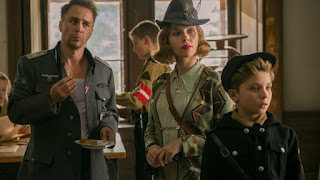 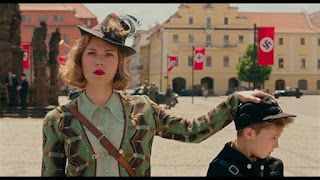 There are two strong female performances. The versatile and always surprising Scarlett Johansson stars as Jojo's loving mother who has no problem kicking a Nazi officer in the balls to defend her son. Her character shows us that to embrace tolerance is often not easy, but it is the right thing to do. Thomasin McKenzie scores as the tough girl in the attic. Rebel Wilson has a small role as the full-bodied Nazi she-wolf who has been programmed to procreate for the Master Race. Returning to the kind of comedy vibe he gave us in his pre-Oscar days with performances in GALAXY QUEST (1999), CONFESSIONS OF A DANGEROUS MIND (2002) and THE HITCHHIKER'S GUIDE TO THE GALAXY (2005), Sam Rockwell stars as the closeted Nazi captain who'd love to wear a colorful cape with matching festive hat. He could not be *out* and be a Nazi captain. Remember, Hitler wasn't too keen on gay people either. Griffin Davis is very well-cast as Jojo. His look and the art design of JOJO RABBIT often reminded me of 1979's THE TIN DRUM and its lead character. 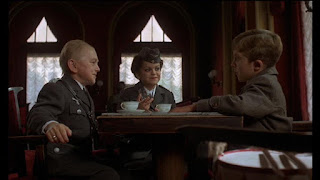 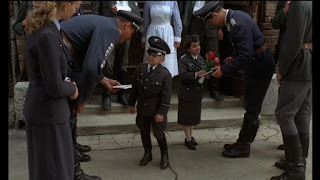 Film critic Joe Morgenstern of the Wall Street Journal was lukewarm on JOJO RABBIT. He referred to it as being mostly "Springtime for Hitler Youth." Richard Brody of The New Yorker wrote: "Today, making fun of Hitler and his minions is both easy and pointless, because he poses no threat; Waititi is kicking a dead bull."

I left South Central Los Angeles to attend a university in Milwaukee, Wisconsin. I was a college student when Gerald Ford was president after Nixon resigned. One chilly, cloudy afternoon in the fall, a Puerto Rican buddy from my dorm floor and I took a walk downtown on Wisconsin Avenue. We were headed to the civic center area with movie theaters, stage theaters and department stores. We got to Gimbels, a top department store at the time with a famous branch in New York City. My buddy, Miguel, and I looked at the Gimbels entrance. Our jaws dropped down to the sidewalk like we were characters in an old Tex Avery cartoon. There, near the front doors of Gimbels, were two Nazis. Men wearing brown shirts with armbands and handing out leaflets. One Milwaukee pedestrian saw us staring and said, "Oh, just ignore them."

I got the immediate feeling that if it's 1931 in Berlin, it's the 1970s in Milwaukee, Wisconsin. When I worked on Milwaukee radio in the late 70s, after graduation, I received some racial hate mail with swastikas drawn on the stationery. My point is -- I don't think the dark legacy of Hitler is such a "dead bull" nowadays. I applaud Taiki Waititi for using his talents to shout down hate and intolerance. He does that within a coming-of-age tale that's also a love story with gorgeous cinematography.

I think JOJO RABBIT will get Oscar nominations for Best Picture and Best Adapted Screenplay.
at December 05, 2019