THE TRUTH ABOUT WOMEN Directed by Muriel Box

Yes, I found another feature film directed by that unjustly overlooked British film director of the 1950s, Muriel Box. After she won the Oscar for Best Original Screenplay with her 1945 British psychological drama, THE SEVENTH VEIL (starring James Mason and released in the U.S. in 1946), she continued to write screenplays as she added a new talent to her credits. She directed her first feature film which was released in the U.K. in 1949. Here was an Oscar-winning female screenwriter who became a feature film director, directed several films in the 1950s and her breakthrough accomplishments for women in film seemed to have been swept under the carpet of film history. I've seen STREET CORNER (1953), CASH ON DELIVERY (1954), SIMON AND LAURA (1955), and EYEWITNESS (1956) -- all directed by Muriel Box and all very entertaining. Her work, focusing on the female experience, was as good as 1950s films from some Hollywood male directors. It seems Muriel Box had a rough go of it mainly because British and a couple of U.S. critics did not give her any encouragement on her trailblazing work. There's an attitude of gender bias in reviews of her films. There was a core of feminism in her 1950s films and there were independent working women in her dramas and comedies. I saw what I believe is the ninth film Muriel Box directed -- a 1957 comedy called THE TRUTH ABOUT WOMEN. Whereas some of her films had good British actors who were not well-known in the U.S., this one was different. It was in color and it starred Laurence Harvey, Julie Harris, Eva Gabor and Christopher Lee. 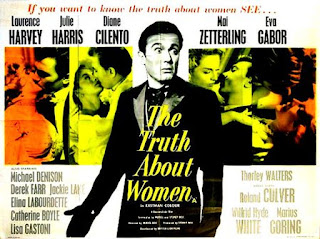 To me, this one seemed to mosey along in sections. It doesn't have the brisk energy and excitement of her dramas STREET CORNER and EYEWITNESS. It's not as funny as CASH ON DELIVERY and SIMON AND LAURA. Still, it's worth a look. THE TRUTH ABOUT WOMEN is one of Laurence Harvey's rare outings in a comedy. We were used to seeing him in serious fare like THE MANCHURIAN CANDIDATE, DARLING with Julie Christie and BUTTERFIELD 8 with Elizabeth Taylor. British senior citizen, Sir Humphrey (Harvey) is in a British mansion. He has grey hair and matching goatee. His son-in-law comes speeding up to the front door in a sportscar, dashes in and demands to see his wife. The butler informs him that she's out. The son-in-law tells his tale of woe to Sir Humphrey. The young man wants his wife to be a wife. That means he wants her to be a second-class citizen and his number-one admirer. Sir Humphrey takes him down memory lane with lessons learned from the women in his past life. We meet these women in flashback sequences. Diane Cilento stars as the first woman. She was a suffragette with a "horseless carriage" (an automobile.) She's feminine, frank and has strong views. She also has her own money. Humphrey falls in love with her and proposes marriage. She loves him but does not want marriage right away. She suggests they live together for a year to see if they're compatible. Shocked, he says "What about your reputation?" She replies, "What about yours?" Muriel Box co-wrote the screenplay with her husband, Sydney Box. 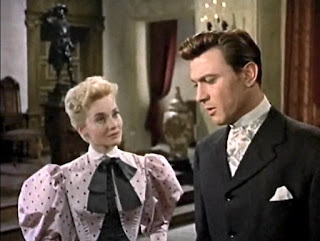 The suffragette is too strong for Humphrey. Then he falls for a woman who's in a sultan's harem. She was purchased in a slave market. Again, Humphrey is shocked. He meets with the sultan and states that the woman is a person "with a mind and a will of her own." To the sultan, she's property. But the sultan challenges Humphrey with Britain's views of women as wives and what's expected of them. In this section, Laurence Harvey has some comedy bits that are just like what Bob Hope would've done in 1942's ROAD TO MOROCCO. Then there's the affair Humphrey had in Paris with a beautiful married woman played by Eva Gabor. She's married to a stuffy aristocrat played by Christopher Lee. He'll learn that, in France, having a husband and a lover is often a smart arrangement. 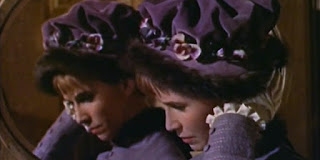 After the suffragette, the best section in THE TRUTH ABOUT WOMEN is about the woman trapped in an elevator with Humphrey. She's an artist. She's in a relationship but not really in love. She'll fall in love with Humphrey. The artist is delightfully played by Julie Harris. It's a reunion for Harris and Harvey. They co-starred in 1955's I AM A CAMERA which was the basis for the Broadway musical, CABARET. Harris played Sally Bowles. Harvey played Christopher Isherwood.

There are more experiences in which Humphrey will learn more about women. We, the audience, learn -- as one character says -- that a woman does not want to be just a wife. She wants to be "a person, an equal partner in the business of life."

It may not be Muriel Box's best film, but consider what this British film says about women as compared to a glossy Hollywood male-directed movie such as 1959's THE BEST OF EVERYTHING directed by Jean Negulesco. Three Manhattan secretaries have careers in order to find husbands before they're 29. A woman over 29 who isn't married is a freak of nature. She's not a whole person unless she has one abbreviation before her name -- Mrs.

That was the truth about women from Hollywood and male directors in the 1950s.

1957's THE TRUTH ABOUT WOMEN should be restored and remastered in respect to director/screenwriter Muriel Box's long-overlooked breakthrough film legacy. It's in color and the costumes were designed by Cecil Beaton. He did the costume design for GIGI (1958) and MY FAIR LADY (1964).
at December 11, 2019