If your spirit needs to be refreshed and recharged, y'all need to see this 90-minute documentary. It's more a concert performance than a typical documentary -- and it's a joyous concert performance at that. AMAZING GRACE puts young Aretha Franklin up front and center at a church in South Central Los Angeles. It's near where I attended high school. In fact, there was a festival one weekend on our campus with some New Orleans musicians. Mick Jagger stopped by. Folks were shocked he even knew our school existed. This was around the time Aretha Franklin performed two nights at the church in Watts. You'll see Jagger in the Aretha Franklin audience for her second night. 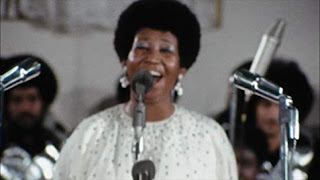 It's 1972. Acclaimed director Sydney Pollack is in the production crew. You hear him chatting with crew members and, apparently, the filming of the two performances was intended to be a TV special. That special never got made. There were problems trying to sync up the audio tracks with some of the visuals. All the footage wound up in a vault at Warner Bros. and stayed there until someone in 2007 pulled it out and worked on fixing the technical difficulties. A few legal difficulties followed. After Aretha Franklin's death in 2018, her family consented to release the documentary. It was released nationally early this year. 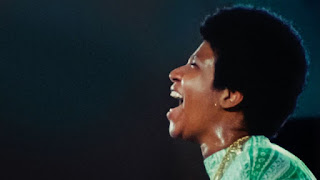 The Lady Soul has not even been singing for a full two minutes when she's giving you goosebumps. You get that sweet shiver from that truly awesome voice. To me, it was the 8th wonder of the world. This is a gospel concert. Franklin gives gospel flavor to Simon & Garfunkel's "Bridge Over Troubled Water" and Carole King's "You've Got a Friend." She'll sing "Amazing Grace," a song that's become quite overdone over the decades, and make you feel like you're hearing it for the first time. Performing with her is the Southern California Community Choir. Aretha's father is present and so is gospel music star Clara Ward a year before she passed away. 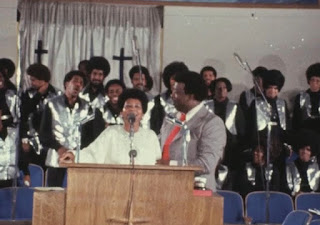 Aretha Franklin's voice will make you want to throw your hands up in the air and praise Jesus, Yahweh, Allah, Buddha, Zeus, Wonder Woman or whatever benevolent force you pray to on a regular basis. Here's a trailer for AMAZING GRACE now on DVD.

Director Sydney Pollack (THE WAY WE WERE, THREE DAYS OF THE CONDOR, TOOTSIE, OUT OF AFRICA and THEY SHOOT HORSES, DON'T THEY?) died in 2008. In 2004, he was a host on Turner Classic Movies. He hosted the Saturday TCM show, "The Essentials." I wish he'd lived long enough to be a guest on TCM again and talk about the experience of AMAZING GRACE.
at December 15, 2019