KNIVES OUT Is Sharp Fun

A family gathering goes all wrong and turns out to be high drama with tensions bubbling up behind tight, polite smiles. No wonder this movie did such good box office business the day after Thanksgiving. KNIVES OUT, written and directed by Rian Johnson, is the most fun "Who Done It?" murder mystery with an ensemble cast that I've seen since Maggie Smith and Diana Rigg, as rivals, lobbed bitchy comments at each other in Agatha Christie's EVIL UNDER THE SUN (1982). The movie opens with a shot of large and rather severe looking house under overcast skies. There's fog and serious strings play in the background music soundtrack. Inside the lushly appointed house, we see nothing really popping with color and festivity but we do see a lot of books. Hardcover book. The patriarch of the family, played by Christopher Plummer, is renowned crime novelist Harlan Thrombey. He's a crusty character who has sweet, young nurse named Marta. She's an immigrant. One of the relatives says that her family is from Ecuador. Another says her family is from Paraguay. Harlen croaks soon after his 85th birthday. Was Harlen murdered? It seems that he was and Marta may have killed him. Or did she? Clues are cropping up but it seems that someone may want to kill Marta.  There's a little Agatha Christie, a touch of the COLUMBO television series and a healthy scoop of Hitchcock suspense. KNIVES OUT stars Jamie Lee Curtis as the dead man's daughter. Jamie Lee is silver-haired and sensational. 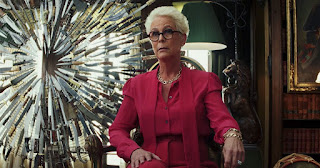 All the relatives are questioned by two cops. Michael Shannon, Don Johnson and Toni Collette play other annoying members of the family. 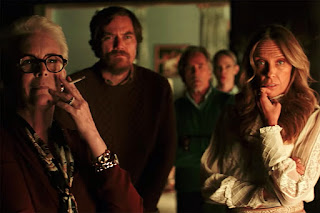 Tagging along with the two detectives is Benoit Blanc. He's been called "the last of the gentlemen sleuths." The private eye assures family members that he's acting "at the behest of a client." I fell in love with Daniel Craig as this Southern-fried private eye. He sounds like a character Truman Capote would've created for one of his short stories. When it comes time to read the will and relatives await news about the inheritance, the relatives have worked the private eye's last good nerve. He lashes out at them, "You are vultures at the feast! Knives out!"

Previously, I'd seen Chris Evans only has Marvel Comics characters onscreen. Man, is he good in KNIVES OUT as the grandson. He is so sexy wearing sweaters that he could do for the sweater what Dorothy Lamour did for the sarong in 1930s movies for Paramount. Chris Evans is definite man-candy. And a good actor. 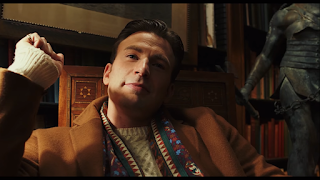 I'm not telling you any more about the plot. I don't want to spoil any surprises. But I will show you a trailer. Here it is.

This is the second of three Stephen Sondheim inclusive movies I've seen that came out this year. JOKER, with Joaquin Phoenix giving a fantastic performance in a bleak and pointless Marvel Comics inspired film, plays an emotionally imbalanced New Yorker in a clown suit who gets beaten up by three yuppies on a subway train as they sing "Send In The Clowns." In the closing credits, we hear Frank Sinatra's gorgeous rendition of that Stephen Sondheim show tune from 1973's Broadway musical, A LITTLE NIGHT MUSIC. In MARRIAGE STORY, Adam Driver sings "Being Alive" from the 1970 Stephen Sondheim Broadway musical, COMPANY. I haven't seen that movie yet.

In KNIVES OUT, Daniel Craig sits in a car alone and sings "Losing My Mind" from the 1971 Stephen Sondheim Broadway musical, FOLLIES.

I know that Daniel Craig experiences great popularity as our current James Bond. But, as good a Bond as he is, I prefer Craig in non-007 roles -- like as the no-name criminal in the 2004 British crime thriller, LAYER CAKE, as the brawny married man who's sexually attracted to the lonely 50+ woman living in the house he's renovating in 2003's THE MOTHER and as one of the convicted Death Row killers being interviewed by Truman Capote in 2006's INFAMOUS. Daniel Craig's highly entertaining performance in KNIVES OUT is one I add to that list.

KNIVES OUT doesn't try to be Oscar bait or make a great social commentary. It's a brisk, brightly acted murder mystery with a racially inclusive cast and good roles for women in ages 30 to 60. The mystery kept me guessing. I loved the original screenplay. KNIVES OUT is sharp fun. Happy New Year!
at December 31, 2019