I love watching animated Christmastime features during the holiday season. KLAUS, available on Netflix, is a new animated feature that looks at Christmas through the mail gaze. It takes us back to those sweet days when children wrote letters to Santa Claus and mailed them to him with stamps attached to the letters. In a way, KLAUS is like a 90-minute Christmas special produced by the United States Postal Service to inspire folks to get off the computers and mail letters again instead of making all correspondence an email or text.  The writer and director of KLAUS is Sergio Pablos, a Spanish animator who worked on Disney's THE HUNCHBACK OF NOTRE DAME and TARZAN. He created the profitable DESPICABLE ME franchise. That style of animation is present in KLAUS. 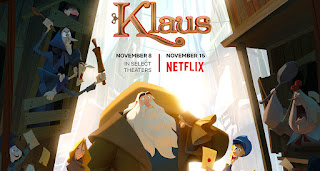 Jesper is similar to a privileged hipster who plans to be a trust fund baby and slack off throughout his young adult years. He is the worst student in the postal academy. In order to teach him a lesson, his father sends him to Smeerensburg, a remote and frigid location known for its feuds. As one cranky resident says, "This town was built on resentment and spite." Old and buffed Klaus is the mysterious toymaker. He's built like that huge monolith in Kubrick's 2001: A SPACE ODYSSEY. Jesper meets Klaus and the miserable, unemployed schoolteacher. All the town feuds have robbed her of students. She now sells fish.  Jesper is a bit of a grinch. He has to learn that one act of goodwill can spark another. He'll learn this as he learns why the town has a history of feuds and how to get the youngsters to write letters. And buy stamps.  Here's a trailer.

On a weekend, KLAUS could keep kids 11 and younger happily occupied. Grown-ups will know immediately that the frigid remote town will come to hold a warm place in Jesper's heart. As this is pitched to us as holiday entertainment, I wish there was more of a Christmas vibe in this feature. It's 40 minutes before you get that little kids and Christmas gifts feeling. Up until that point, it plays mostly like a snarky dude who gets sent to a bleak, wintry location for a new job.  I know they are shorter in length and were TV productions, but think of Dr. Seuss' HOW THE GRINCH STOLE CHRISTMAS, A CHARLIE BROWN CHRISTMAS and the Rankin/Bass RUDOLPH THE RED-NOSED REINDEER. They didn't dawdle letting us know that Christmas was the big event in the story. Even if Lucy did get a little grinch-like when Charlie Brown was assigned to direct that school Christmas play, even if the tree he picked out was not a lush Douglas fir, the main focus was still the joy of Christmas. 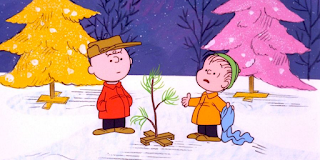 That joy, that aspect, needed to be pushed up to an earlier part of KLAUS. Also, I wanted bright yuletide colors like we got in the animated HOW THE GRINCH STOLE CHRISTMAS. The colors in KLAUS and mostly off-white and grey. The colors came off a shade muted. I wanted them to really pop and read "It's Christmas!" 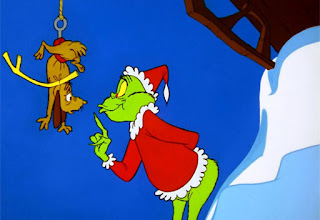 You'd think KLAUS would be a musical. It's not. There is action when the bad folks in the town want to steal all the toys and start the feuds again. There's also romance when Jesper falls for the schoolteacher.

Overall, if you need to keep youngsters occupied for 90 minutes while you get some work done around the house over the weekend, KLAUS on Netflix feature can do the trick. If they haven't seen those three retro TV specials I mentioned, definitely show them to the kids also.

Merry Christmas! Mail someone a Christmas card.
at December 07, 2019