I'm sure you've heard about BOMBSHELL. Produced by Charlize Theron, it's based on the accounts of women who spoke up and spoke out again sexual harassment from Fox News CEO Roger Ailes. Charlize Theron is remarkable as Megyn Kelly. She's an amazing technician at capturing someone's vocal cadence, physicality and motivations. Look at her Oscar-winning performance as serial killer Aileen Wuornos in 2003's MONSTER. I worked on a local New York City news program at the time that movie was released. One of our show's anchors had done a news feature on the killer. In her feature, she had news footage of Wuornos speaking in custody and then cut to a clip of Theron in the film. The resemblance and the actor's recreation were uncanny. When women started coming forth against Harvey Weinstein and Rogers Ailes, I cheered. When the early accusers stated that they kept quiet for a long time for fear of never working again, I knew exactly how they felt. No, I've never been sexually harassed in a work situation. However, I have definitely felt racial discrimination and the push back from seeking equal opportunities. Other people of color who experienced the same advised me not to speak out and run the risk of not being hired for future work in TV. As for BOMBSHELL, it is one extremely Caucasian movie. That is no criticism of the good cast. It's an accurate detail that I don't recall many white male film critics noticing. The alternate title for BOMBSHELL could've been WHAT HAPPENS WHEN WHITE PRIVILEGE GOES HORRIBLY WRONG. 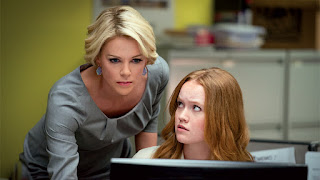 Charlize Theron plays Megyn Kelly, Nicole Kidman plays Gretchen Carlson, Margot Robbie plays a composite character, Kate McKinnon of SATURDAY NIGHT LIVE plays a lesbian Democrat cautiously working for Fox News and John Lithgow slams across an excellent performance as Roger Ailes. The acting is top shelf and I felt the movie was good, but it could have gone deeper. From 1994 to 1999, I was a regular on a WNYW/Ch. 5 live TV news program called GOOD DAY NEW YORK. That show gets a visual reference in the film as WNYW is a Fox station. There were many Black and Latinx folks on our production staff for the morning show. However, just because Black and Latinx folks are on a staff doesn't automatically mean they're subject to promotions, upward mobility and equal pay like the white employees are getting. I made 1999 my final year on GOOD DAY NEW YORK because, after years of good work -- some entertainment news items I broke got national attention -- and popularity with viewers, my contract had been renewed for $10,000 less. There was no reason for the major decrease. I was not making one of those impressive 6-figure salaries you read about. I was told it was "Take it or leave it." As I was still paying the mortgage on my mother's house, I took it. 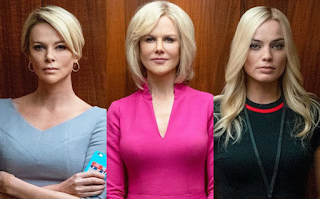 Theron, Kidman and Robbie play blondes. The on-air women are selected by Ailes as if he's a lascivious 1930s Fox movie studio head picking out glamour girls to put under contract and turn into sex symbols. When you look at the scenes in the Fox News offices, it was like a Hollywood studio in the 1930s. There were no Black stars. Black performers had minor roles and not got the same privilege white talent did. Did the highly-paid white journalists ever notice or speak up about the racial imbalance in their newsrooms? They're in midtown New York City, working in TV journalism, and the staffs are predominantly white. When other women come forward with sordid stories about Roger Ailes, they're all white. Here's a trailer.

The late Liz Smith, a longtime respected entertainment news journalist whose column was syndicated in newspaper across the country, was a semi-regular on GOOD DAY NEW YORK I loved working with her and she was most kind to me. She felt I was under-utilized on the show and should've been on a network program. Liz Smith wrote a letter pitching me to Roger Ailes, a buddy of hers. She did that on her own -- and sent me a copy of the letter.  I thanked her very much for her support. Nonetheless, I did think to myself "I'm Black, gay and a Democrat. I won't be sitting by the phone waiting for Roger Ailes to call me."

Watching BOMBSHELL confirmed a feeling I go during my seven consecutive years of working on local TV morning news programs in New York City. When the executive branch of a corporation is infected with the virus of toxic white male masculinity, those men have a coin in their pockets they use to their advantage. On one side is sexual harassment. On the other is racial discrimination. The standout performances in BOMBSHELL come from Margot Robbie, Charlize Theron and John Lithgow in heavy make-up and padding as Roger Ailes. 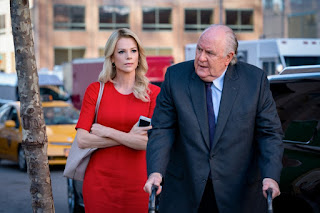