Tom Hanks Will Make My Day

This Thanksgiving, we will be able to see Tom Hanks once again play a biographical character.  I loved him as astronaut Jim Lovell in APOLLO 13, as Walt Disney in SAVING MR. BANKS, as airline pilot Chesley "Sully" Sullenberger in SULLY and as newspaperman Ben Bradlee in THE POST. After we eat our turkey dinners, we can see him play the late and beloved children's TV host, Fred Rogers, in A BEAUTIFUL DAY IN THE NEIGHBORHOOD. Doesn't this seem like the most perfect casting we've heard about in years? If you've read my blog posts occasionally, you know that Tom Hanks holds quite a special place in my heart and has ever since I saw him in drag every week on ABC TV. I proudly admit that I saw every single episode of BOSOM BUDDIES, his 1980 sitcom that had a SOME LIKE IT HOT angle. Two male friends were in a such a desperate situation that they were forced to dress as women. In Billy Wilder's SOME LIKE IT HOT, it was to keep from getting killed by a 1920s gangster. In BOSOM BUDDIES, it was to find affordable housing while they started their careers at an advertising agency. 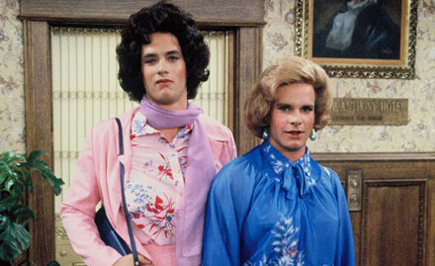 My Aunt Ruby had the very same hairdo Hanks did on that TV series.

One of things that's made me a devoted Tom Hanks fan is that, from his TV sitcom to his Oscar winning film career, his work has not only entertained me. It's made me feel less lonely. It's also enlightened and illuminated me -- taught me things about history, about the world around me, provoked me and inspired me. During my TV career in New York City, I had four encounters with Mr. Hanks, all work-related, and every one terrific. One encounter with Tom Hanks soothed my soul at a moment when I wanted to cry and rage at life because of news I'd just received on the phone from Manhattan. This was when I was in a Beverly Hills hotel preparing to interview Tom Hanks during the press junket for FORREST GUMP (1994). 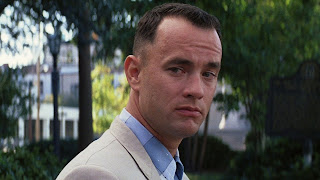 I wish I could be in the press junket for A BEAUTIFUL DAY IN THE NEIGHBORHOOD, if there is a press junket for it. I watched the trailer this morning. My first reaction was "Wow! He pushed himself." That's a compliment. I once read that Hanks has a tremendous fear of singing in front of people. The trailer opens with him as Fred Rogers making his TV entrance and singing his theme song to the audience. I'd love to ask Hanks about that in an interview. 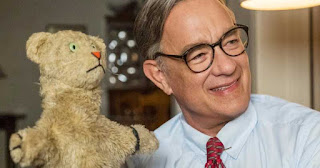 Less than 30 seconds later, the trailer put a lump in my throat and made me cry. It brought up a memory from late spring 1994.  After he sings, Mr. Rogers meets a young gentleman interviewer on the TV set. The way that Mr. Rogers warmly greets him, the way he extends his hand, is exactly the way Tom Hanks greeted me when I walked into his suite, emotionally devastated, to interview him about FORREST GUMP. Shortly before I flew out for the junket, my partner was having a little problem in his chest area. He was an AIDS patient who'd been diagnosed early in 1993. We lived together in my studio apartment in Chelsea. I got him to Mt. Sinai on a weekday to see his doctor about the chest discomfort. His wonderful doctor told us both that, he's surely be ready to go back home with me with I returned from the press junket. Just to be on the safe side, she wanted him to stay through the weekend for some tests. There was nothing to worry about.

Then something changed while I was out of town. She called my hotel room. "Don't panic," she began in a most compassionate tone, "but Richard's body is not responding to medications as it should. We've done all we can do. I think you need to call his parents. I'm so sorry."

We finished our conversation. I prayed to Heaven for strength before I called his loving, helpful mother in Tennessee to tell her. I was about to call the airline for the next flight to New York and reschedule my return trip due to emergency. I'd leave without doing the press interviews.

The phone rang again. It was Richard's doctor again. "I told him I called you," she said. "He told me to call you again. He does not want you to fly back without having done your work. He's adamant about that. He wants you to do your work. Don't ask me how I know, but I feel in my heart that nothing drastic will happen before you get here. He has a few days."  She was correct in her hunch. Richard's parents, his grandparents and I were near when he passed away.

Tom Hanks had won an Oscar for PHILADELPHIA in which he played a man with AIDS fighting for his civil rights in court. The young man I loved, the person I was caregiver to, had AIDS. I felt restricted about mentioning it in the workplace because, at that time, coming out could still cost you your job. I needed the TV job I had then to take care of us both and pay the rent.

Inside, I was shattered. I had to focus on my questions. I prayed I'd be good and conduct a smart interview. I walked into Tom Hanks' room. He stood up, smiled, and approached me with such a warmth that it instantly calmed me down and cracked through my heartache. He'd recognized me from my previous job, at VH1. He made me smile. He made me comfortable. He liked my questions. He was a helper. He helped me pull it together, to focus, and to get through that painful morning. He doesn't know this. One day, I hope he does. Here's the trailer.
With this performance, Tom Hanks continues to support the talent of female filmmakers. Penny Marshall directed him in BIG (1988) and A LEAGUE OF THEIR OWN (1992).  Nora Ephron directed him in SLEEPLESS IN SEATTLE (1993) and YOU'VE GOT MAIL (1998).  A BEAUTIFUL DAY IN THE NEIGHBORHOOD was directed by Marielle Heller. She directed Melissa McCarthy and Richard E. Grant to Oscar nominations for 2018's CAN YOU EVER FORGIVE ME? Ms. Heller should've been in the Oscar buzz for Best Director and Best Film. 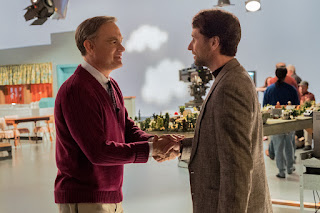