To win awards is not the reason why we should attempt to and push ourselves to make art. It shouldn't be, in my opinion. However, it must be a lovely feeling to know that your work has been embraced, that it's made an impact. At Oscar time, if a contender says "It's an honor just to be nominated," I believe it. That said, it's hard to believe that Vittorio De Sica never received an Oscar nomination for Best Director. What a master filmmaker! My parents introduced me to his work when I was growing up in Los Angeles. One of my favorite professors introduced me to more of his work in my Film Journalism course in college. Vittorio De Sica directed BICYCLE THIEVES (1948), UMBERTO D. (1952), TWO WOMEN starring Sophia Loren (1960) and Loren did her famous striptease scene with actor Marcello Mastroianni in YESTERDAY, TODAY and TOMORROW (1963). 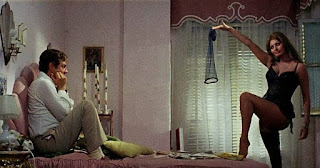 If you've never seen BICYCLE THIEVES, promise me you'll rectify that as soon as possible. 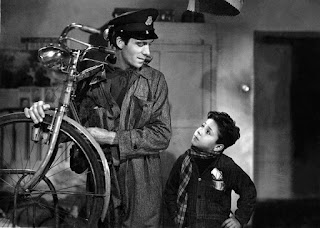 There's another De Sica film I love. Just like in YESTERDAY, TODAY and TOMORROW, it has characters and communities that remind me of my neighborhood in South Central L.A. when I was a kid. Working class people who were just getting by, but they did get by and they blended into each other's lives. They were lively, colorful, memorable, strong -- and overlooked by people in outer neighborhoods who had more, who had privileges. Those were people who, if they were given a plate full of good food and ate only half of the serving, would throw the remaining food away. We would save the rest for a later time. There was always someone in the family who could finish it. Food was never to be thrown away.

Overlooked, dear working class people such as those are in a lesser-known Vittorio De Sica film from 1956.  It's called THE ROOF. It's a simple film in black and white, only about 90 minutes long. There are no stars in it. Nonetheless, you'll remember the performances.  I saw THE ROOF a couple of times a few years ago. I watched it twice in the same weekend. I found it recently, soon after we celebrated Independence Day with fireworks and such. Finding THE ROOF again this month was like having Christmas in July. 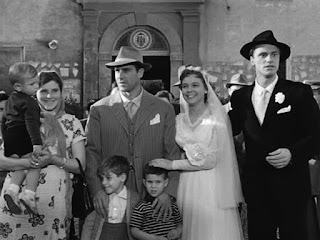 A young couple has just gotten married. The sweet newlyweds are just starting out in life together yet they have so little money that they are below the poverty line.  They love each other and director De Sica loves them. The man and wife really have no home. They call upon the kindness of relatives for a place to stay. They can't even be alone together on their wedding night. Still, the light of love in their eyes never dims and neither does their hope. 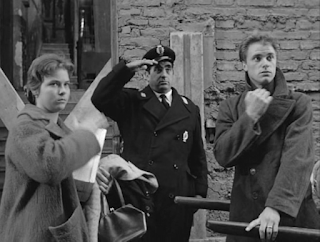 There's a lot of new buildings being constructed in Rome. The husband is a construction worker. Ironically, he can help build homes but he cannot afford to have one of his own. In the outskirts of Rome, people build makeshift dwellings. That's prohibited. However, there's a law that if the dwelling has a door and a roof, people cannot be evicted from the dwelling.

The newlyweds seeks a place with a roof. Through a series of humiliations, they carry on and help comes to them. The simplest of things are like gold to this couple. This couple is like gold to me.

This film is like a warm, loving embrace you get when your spirits are tattered. THE ROOF is a De Sica gem.  If there's ever a chance you can attend a screening of this subtitled foreign film, go.

Vittorio De Sica. What a master filmmaker. He did get one Oscar nomination. It came in the Best Supporting Actor category for his performance in 1957's A FAREWELL TO ARMS.
at July 09, 2019