I never realized how popular that 1966 Catholic school comedy movie was until I had a part time job in New York City in 1991. Rosalind Russell was proud to be one of Hollywood's favorite Catholic leading ladies -- along with Loretta Young and Irene Dunne. It was a kick for her, in the last decade of her long and successful film career, to play a nun. She was the no-nonsense Mother Superior dealing with the Catholic high school hijinks of two teen classmate girlfriends in THE TROUBLE WITH ANGELS. Is this movie a great film like a CITIZEN KANE, THE APARTMENT, WEST SIDE STORY, LAWRENCE OF ARABIA or CHINATOWN? No. But it sure was entertaining to us baby boomers when we were kids. Hayley Mills, the teen star, was child actor royalty to us in those days. This loopy comedy was just the kind of movie we went to see for family night at the drive-in on a Friday or Saturday night. I was a Catholic kid who survived years of Catholic school education in Los Angeles. I must say that, in those years, some of my favorite teachers were the nuns. They were daunting figures when the school year started but, as it progressed, they'd warm up to us and reveal qualities of being hip, playful, protective and delightfully subversive to a degree. There are nuns like that in THE TROUBLE WITH ANGELS. 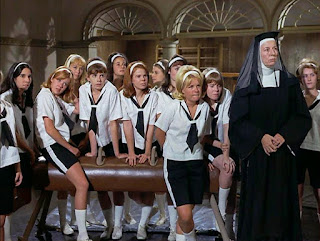 There's some Women in Film history about this light, sentimental comedy. THE TROUBLE WITH ANGELS was the only full-out film comedy and the only film in color directed by trailblazer Ida Lupino. Just like Rosalind Russell, Ida Lupino had slammed across several solid big screen performances in Hollywood releases of the 1930s, 40s and 50s. In the late 40s, Lupino became a trailblazing film and TV director. Rosalind Russell may have been the only female star who acted movies under the direction of Hollywood's two groundbreaking women directors. Russell starred in the 1936 drama, CRAIG'S WIFE, directed by Dorothy Arzner.  It was redone in 1950 as HARRIET CRAIG starring Joan Crawford for director Vincent Sherman. If you see Ida Lupino's THE TROUBLE WITH ANGELS, you sense it had a big influence on Whoopi Goldberg's 1992 hit comedy, SISTER ACT. Recently, I saw William Wellman's 1934 political thriller, THE PRESIDENT VANISHES. In a supporting role, Rosalind Russell had her second film appearance. Her name was 12th in the cast credits after the title. As soon she as she appears, she clicks. Russell is slick, elegant, confident and the camera loves her. She's also talented. She played a Washington wife, an insider whose shady husband asks her to throw a dinner party for five shady lobbyists. Their purpose is to challenge the president's power for their corrupt financial gain. The Washington wife is just the kind of dame newspaper reporter Hildy Johnson (Rosalind Russell in 1940's HIS GIRL FRIDAY) would've loved to expose. 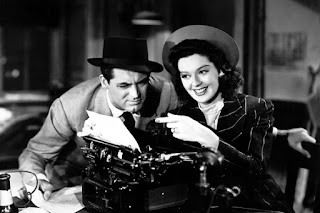 In 1991, I had a part-time job as a clerk in a video rental store in the Chelsea section of Manhattan. I loved that job. Our independent store, Video Blitz on the corner of 17th and 8th Avenue, had large glass windows. We had two TV monitors, one inside the store and one in the window with the screen pointed to the street level. We always had a movie playing on the monitors during store hours. People would stop on the sidewalk and watch the window monitor for a few moments.  Every time we played THE TROULE WITH ANGELS, customers would come in and profess their love for the movie, adding that it was one of their favorite films when they were kids. They could all quote the Hayley Mills "a scathingly brilliant idea" line. That's when I discovered how popular THE TROUBLE WITH ANGELS was. It's not a famous movie. It's not a true Hollywood classic. However, it's a work of entertainment that holds a special place in many hearts. 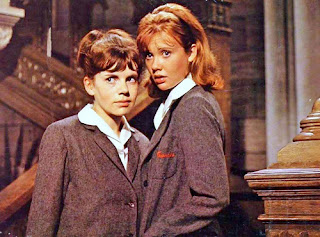 You have the two best friends -- one mischievous and one shy -- at an all girls Catholic academy. Mother Superior has to keep one step ahead of their pranks while making sure all the girls do well in school. There are sight gags in the movie involving the two girls and some of the nuns. A Twitter buddy of mine writes capsulized film reviews. He wasn't too keen on this film. He wrote "Rather ordinary fracas with script stuck I the '50s. Comically sentimental & low on personality." I disagree. I watched Ida Lupino's THE TROUBLE WITH ANGELS again well into my adulthood and I saw another tender layer in it. Within the comedy antics is Ida Lupino's valentine to the longevity of female bonding. Our main focus is on the friendship that begins between the two teen girls who are new to the boarding school. Then we see female friendship at middle age, especially the friendship between Mother Superior and the lovable Sister Ligouri played by Marge Redmond. Redmond got into the habit again as one of the nuns in the ABC sitcom, THE FLYING NUN. We also see how the middle-aged females teach the young females to give time, attention and comfort to women in the senior years, women who may feel old and lonely. 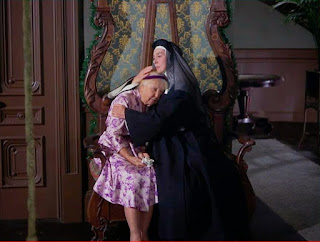 This Catholic girls' school comedy is about the sisterhood of females and the golden qualities of female bonding. That's what I see in Ida Lupino's THE TROUBLE WITH ANGELS starring Rosalind Russell, Hayley Mills, June Harding and Gypsy Rose Lee. This was four years after Russell played the famous stripper's mother in the film version of the smash Broadway musical, GYPSY, based on Gypsy Rose Lee's memoirs. 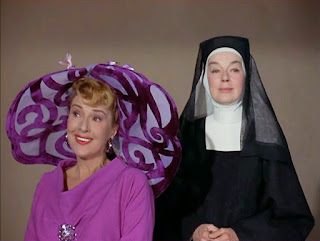 Rosalind Russell received four Oscar nominations in her career, all in the Best Actress category. She got them for MY SISTER EILEEN (1942), SISTER KENNY (1946), MOURNING BECOMES ELECTRA (1947) and AUNTIE MAME (1958).