The former Broadway musical comedy dancer had been discovered by Hollywood, made her film debut in a Hitchcock mystery/comedy, 1955's THE TROUBLE WITH HARRY, and then scored a well-deserved Best Actress Oscar nomination for her touching performance in the 1958 Vincente Minnelli drama, SOME CAME RUNNING. Her second Best Actress Oscar nomination came for Billy Wilder's classic 1960 drama/comedy, THE APARTMENT. In that, she was radiant as the lovable New York City insurance company elevator operator whose wounded soul and broken heart are healed by a most unlikely true love. In 1962, Shirley MacLaine starred as a woman who takes to the high C's. She performs the operatic work of Puccini as Madame Butterfly in 1962's MY GEISHA. This is a movie that may not be one of the most well-known in MacLaine's canon of films. It's one that's held a special place in my heart ever since I was teetering on the brink of teen-age in South Central Los Angeles. I developed a big crush on Shirley MacLaine when I was a kid. I loved watching early Shirley be kooky in movies that aired on local TV.  Movies like 1955's ARTISTS AND MODELS with Dean Martin and Jerry Lewis and 1961's ALL IN A NIGHT'S WORK again with Dean Martin. In MY GEISHA, Shirley MacLaine plays a famous movie star. She's famous for comedies. Hollywood's top funny girl is married to the director of those comedies. Hollywood swoons at this marriage because, as one person remarks, it's not just a marriage, "...it's a love affair."  Shirley MacLaine is Lucy Dell, Hollywood star, and Yves Montand is Paul Robaix, her director/husband. Edward G. Robinson co-stars. 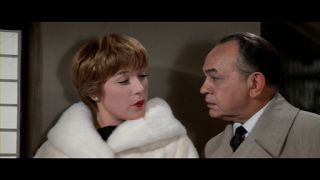 I loved Shirley MacLaine's kooky charisma in MY GEISHA when I was a boy and saw it on TV a few times. Our TV was black and white, as many were in those days. When the 80s arrived and we had VHS tapes available to rent from video stores, I fell in love with MY GEISHA all over again. I fell in love with the look and color of it. Some of this Paramount romantic comedy was shot on location in Japan.  The director of MY GEISHA was Jack Cardiff, the master British cinematographer who gave us rich, vivid, magnificent color photography in THE RED SHOES, BLACK NARCISSUS and A MATTER OF LIFE AND DEATH. Although Cardiff is not the credited cinematographer on MY GEISHA, you just know that he collaborated in its look.

Here's the story: Lucy Dell's husband, Paul, has a new project. He's directing a movie adaptation of MADAME BUTTERFLY with Puccini's music. He wants to shoot on location in Japan and he wants to find a Japanese actress to play the lead. Lucy hates to be separated from Paul for long stretches. She pitches herself for the lead role. Paul politely tells her she'd be wrong for the role. It's a tragic love story that ends with a suicide and the part should be played by a Japanese actress. Edward G. Robinson plays their friend and producer. He knows a movie studio will give Paul a much smaller budget to shoot a movie that does not star Lucy. The studio will probably also demand he shoot in black and white and reduce his on-location time to shoot most of it on the Paramount lot instead.

Paul and his producer go to Japan. Paul holds many auditions. He meets actual geishas. Lucy goes to Japan and secretly tells the producer of her plan to surprise Paul. She knows he's having dinner with a few geisha girls. She gets dressed up like one -- full extreme make-up, wig, kimono and contact lens to hide her blue eyes -- and joins the dinner as one of the girls. Clueless Paul is fascinated with one geisha named Yoko Mori. He has no idea she's really his wife, Lucy Dell.
He gives Yoko a screen test. She gets the part. Now Lucy and the producer have to think fast. The producer tells Lucy's secret to the studio head. Now that Lucy's involved in the picture, the budget is generously increased. Paul can shoot on location and shoot in color. Meanwhile Lucy has to begin studying for her role in Japan while she pretends to be back in the U.S.A.  She'll be playing two roles at the same time -- Butterfly and Yoko Mori.
Paul deeply loves Lucy. However, he reveals that his "vanity" gets dented because he knows that Hollywood sees him as "Mr. Lucy Dell."  After the film is completed, and its world premiere is held in Japan, the studio head wants geisha Yoko Mori to reveal her true identity for a major entertainment news splash. This will make Lucy Dell's stardom burn brighter than ever.

Lucy Dell reinvents herself as an actress. Paul Robaix distinguishes himself as a director. In the marriage, there will be revelations, manipulated heartbreak and we'll see if the Hollywood "love affair" survives. Does Lucy love her career a wee bit more than she loves her husband?

This may not be the deepest of plots. However, it's the kind of movie entertainment that I needed. I found the movie last night. After a week of White House news that made me want to go full James Dean in REBEL WITHOUT A CAUSE and cry out "You're tearing me apart!," I craved soothing movie entertainment with a talented, skilled cast, some laughs, love, fabulous Edith Head costumes, gorgeous color and a happy ending. That's what I needed -- and I got it with MY GEISHA.

What I noticed now in the movie is how much the husband and wife truly love each other. When he's away from her, he tends to be a little cranky. The crankiness suddenly vanishes as soon as hears from her. Lucy, as Yoko, knows how to fend off the constant flirtatious advances of her constant comedy co-star. He's played by Bob Cummings. Cummings, like Lucille Ball and Desi Arnaz, was a middle-aged actor who'd been making movies since the late 1930s/early 40s, but doing a hit TV sitcom in the 1950s made him a bigger star than any Hollywood movies had.  Bob Cummings applied some of his goofy ladies' man bachelor TV sitcom persona to his MY GEISHA character.

Japanese culture gets respectful treatment in MY GEISHA. During Paul's auditions, we see how young Japanese women have been heavily influenced by our American pop culture. After Lucy/Yoko lands the lead role, Lucy and her producer find an veteran Japanese instructor who can teach them about the art of being a geisha and introduce them to someone who can coach Lucy for her new film role.

Lucy gets an education. And so did I. At that time, American men seemed to think geishas were just party girls in kimonos who pleasantly served food and drink and then freely provided sexual favors as dessert. The older Japanese gentleman explained the true strict and intellectual art of being a geisha. He told what it entailed and what skills it required. The line would get a loving chuckle today because of material in a couple of Shirley MacLaine's future books, but Lucy pays full attention to what the older instructor says and then replies, "You couldn't teach me that in two lifetimes." Yoko Tani is lovely and wise as Lucy Dell's geisha coach.

Steve Parker is the producer of MY GEISHA and you definitely see his name in the opening credits. He was Shirley MacLaine's husband at the time. They were married for nearly 30 years and, when this film came out, they had a most non-traditional, open marriage. He lived and worked in Japan. She had an apartment in New York City and made movies in Hollywood.

About the education. Lucy Dell gets an education in the art of being a geisha and the emotional discipline that old art required.  Because of MY GEISHA, before I was 13, I could hear an aria or an overture on the radio and know it was from Puccini's MADAMA BUTTERFLY. This Shirley MacLaine entertainment introduced me to some classical music. Because of the monologue about the life and art of the geisha, I picked up a book in my high school library and read it. Reading that book inspired me to do a term paper on the author. I got an "A" on that paper.  The book was SNOW COUNTRY, a novel by revered Japanese writer Yasunari Kawabata.  It's the story of a geisha's unfulfilling love affair with a man who, today, would be called a hipster. Still one of my favorite novels, Kawabata's book is a masterpiece about wasted love that takes us into the life of a provincial geisha who sees herself as a woman who will "go pleasantly to seed."

One form of entertainment can be a bridge to other discoveries in the fine arts.

Shirley MacLaine in MY GEISHA was just the colorful, sweet tonic I needed last night.  Yves Montand still gives my heart a glow when he says "Keep bowing, you little ham."