Hollywood, especially the Hollywood of the last 20 years, seems fascinated with actors in biopics like a cheerleader is fascinated with a Super Bowl champion quarterback. Look at some of the actors who have won Oscars since 2000 for playing real life characters onscreen -- Hilary Swank, Adrian Brody, Nicole Kidman, Julia Roberts, Philip Seymour Hoffman, Sean Penn, Sandra Bullock, Helen Mirren, Marion Cotillard, Cate Blanchett, Jamie Foxx, Meryl Streep, Daniel Day-Lewis and Rami Malek. A recent biopic about an internationally famous Hollywood comedy screen team did not get any Oscar attention from the Academy, nor did it get much attention at the box office. However, that doesn't mean it's a weak film. Just the opposite. It's got surprises and it's worth your time. The 2018 release is STAN & OLLIE. Yes, it's about Stan Laurel and Oliver Hardy. Laurel & Hardy made their first appearance as a team in a silent film short released in 1927. Ten years later, they were on top in Hollywood and starring in feature films. They remained a team through stage and TV appearances in the 1950s. Hardy died in 1957. After his death, Laurel chose never to work with another partner and went into retirement.  The main surprise of STAN & OLLIE is the exceptional lead performances by John C. Reilly as burly Oliver Hardy and Steve Coogan as slim Stan Laurel. Not only did they make me laugh and touch my heart, there were times when they were absolutely uncanny.  You felt like you were actually watching a clip from a 1930s Laurel & Hardy comedy feature. The actors' physicality and timing as the comedy team were brilliant. 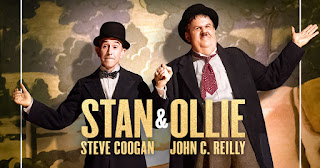 The story opens in 1953 when the two are embarked on a physically draining music hall tour in England and Ireland. As far as travel and hotel arrangements and promotion for their shows, you'd never guess they were an iconic Hollywood comedy team. They have to tote their own luggage and use pay phones. Audience size is small. They never, ever threw any star tantrums but you will feel that each, at least, deserved a hotel suite with room service. Things will improve along that line during the tour, Oliver's health will start to fail, there will be some friction between them, a reconciliation and a packed house. A bit of the friction is rooted in ZENOBIA, the 1939 feature film comedy Oliver Hardy made without Stan Laurel. Stan wasn't in it because of his contractual problems with producer Hal Roach. Harry Langdon, also a comedy star from the silent screen era, was cast along with Hardy. Zenobia was the name of a circus elephant. 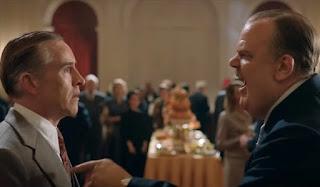 I loved that the film taught me something about Stan the man and "Babe," Stan's nickname for Oliver. I didn't know that Stan wrote so much of their material and that Babe had a tendency to play the racehorses too much. For years, starting in 1927, they were featured in Hal Roach productions. STAN & OLLIE shows conflict they had with Roach contractually. We see the business of show business and the discipline it takes to get in front of the cameras and be funny when the way you're treated as talent behind the scenes is no laughing matter. We flashback to 1937 when the duo was filming its hit feature, WAY OUT WEST.

I'd seen entertainment news pieces on the extensive make-up sessions John C. Reilly underwent to look like Oliver Hardy. I wish some entertainment news contributors on TV had mentioned that the final product turned out to be such a fine film with surprise, heart, humor and affection coupled with good acting.
Another thing that tickled me about STAN & OLLIE was their wives. They're portrayed as two devoted women who appear to cordially loathe each other. Their sophisticated squabbling practically makes them another comedy team. The wives are a hoot. 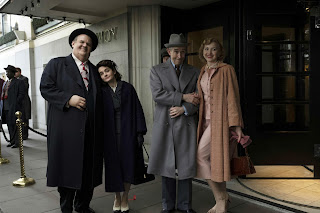 If you're a Laurel & Hardy film, this sweet biopic is worth a look.