A wealthy American couple lives in Paris. They reside in a manor. Walls in the living room are painted an old money green, like a longtime Beverly Hills cocktail lounge once alive with stars but now draws tourists because of its history. Toni Collette and Harvey Keitel star as the Americans in Paris. The wife is throwing a swanky dinner party and panics when she realizes she'll have thirteen guests. She is superstitious about a 13th guest possibly bringing bad luck -- like Judas at the Last Supper. She orders one of her maids to do extra duty. Maria, who's been with the couple for 10 years, will be given a quick fashion makeover by her boss and emerge as of the guests. She will sit next to madame at the dinner table and pass herself off as a woman from Madrid who's related to nobility. Maria does not think this idea will work and she's initially reluctant to do it because she is pear-shaped. The comedy/romance is called MADAME. Maria the maid is played deliciously by Rossy de Palma, a charismatic actress known to fans of classic Pedro Almodóvar films. She's the dark-haired lady with the prominent proboscis. 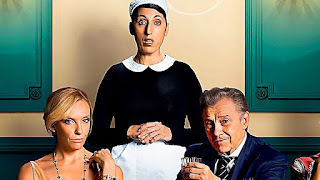 Maria, neither 20something nor slim, gets dressed for the dinner ruse. She winds up sitting next to an attractive British aristocrat instead of next to her female boss. He and Maria hit it off. In fact, she's the real spark of life and freshness at the table. Without revealing her occupation, she is her true self and enthusiastically starts talking about Hugh Grant movies and his scandal with a prostitute. Then she tells a couple of jokes. She melts the aspic of privilege that seems to encase the other guests. The British aristocrat is taken with her. As he will later say, "...she beguiles me." He believes she really is related to Spanish nobility and a romance ensues.  He takes her to the movies, to dinner and for a ride in his sportscar. Madame gets jealous. She is jealous and irritated that her maid and she are now seen as equals. The romance has worked her last good nerve. "How could the maid inspire such feelings?," she rants. Her husband suggests she just get over it by dismissing the servant. The wealthy wife snaps back, "I can't fire her. She knows the house like clockwork...She knows the color of our underwear."

Madame is determined to break up the romance. It's like she has become a Judas in the life of kind, lovable maid. 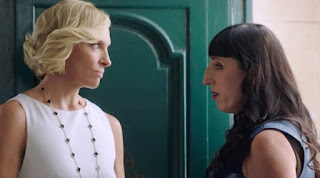 This movie, directed and written by Amanda Sthers, came out in 2018. I never heard about it. I found a VARIETY review that found it to be a "subpar" comedy of manners with good performances -- especially from Rossy de Palma ("always a treat to watch") and Toni Collette.

I agree about those two performances. I'll also admit that there are tropes in this upper class/lower class comedy we've seen in Merchant Ivory films and imported programs on PBS. But Rossy de Palma won me over as soon as she professed to be worried because she's pear-shaped. I loved her vibrant scene at the dinner table. I loved seeing the maid being treated like a first class citizen. Rossy de Palma's performance kept me interested in this 90-minute feature.
Is it a great film like 1939's THE RULES OF THE GAME by Renoir or Buñuel's 1962 classic, THE EXTERMINATING ANGEL? No. Nor did I expect it to be. It was, however, entertaining and I needed some entertainment. After watching last night's news of Trump speaking at another one of his rallies, I left like Brian, the British writer, in the German beer garden during the "Tomorrow Belongs To Me" number in CABARET.

Yes, there are stereotypes in MADAME. Critics were lukewarm to the movie. However, critics raved about Woody Allen's MIDNIGHT IN PARIS (2011). I watched that recently and felt like I'd already seen it. The lead actor, Owen Wilson in this one, was stuttering and stammering like Woody Allen. The romance that seems to have become "a dead shark," the mentions of great literature, the loser who proves to know more than the show-off intellectual, the love of Cole Porter -- I felt like Woody Allen gave us leftovers from his other films, placed them on fancy lettuce surrounded by slices of new cheese of a silver platter, and the critics ate it up. To me, MADAME felt fresher. Have we ever seen a story like this in one of the many Hollywood films about a black maid who works for rich white folks here in America? Nope. 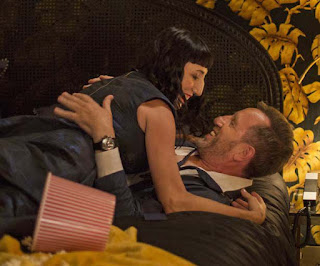 With almost every other film at the cineplex being a new sequel in a Marvel Comics Universe franchise or an overly promoted Disney retread of an animated classic, seeing some real people with middle-aged bodies have romantic encounters gave me hope. Again, I was entertained. Also, I like supporting the work of female directors. If you can't find MADAME from Amanda Sthers on cable's STARZ, it's on Amazon Prime.