Seen WHEN THEY SEE US Yet?

This a reminder that you can still catch the very good, gut-wrenching and socially significant WHEN THEY SEE US on Netflix. This mini-series, directed and co-written by Ava DuVernay, shook my soul with such a fury that I had to give myself a day or two in between episode viewings. WHEN THEY SEE US is based on the true story of "The Central Park Five," the quintet of Black/Latino teens wrongfully convicted of raping a white female jogger in Central Park in 1989. That news story became a headline in and out of America. The real criminal confessed to the crime after the year 2000. His DNA was on items from the attack. The five males, all teens, were not sent to juvenile incarceration, they were thrown into the hardcore adult prison system. When you see the abuse of justice, it will and should rattle you.  Ken Burns did a strong PBS documentary on how justice failed the Harlem teens. His documentary is called THE CENTRAL PARK FIVE. Ava DuVernay's production got high praise from Ken Burns. 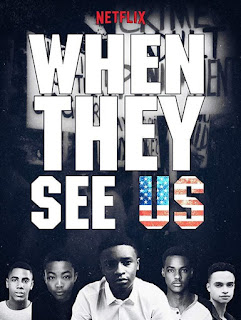 I was living and working in New York City at the time the crime made headlines. Press was in a frenzy. It was the press that tagged the teens "The Central Park Five." Burns, like DuVernay, includes how Donald Trump got involved with this case by taking out large, expensive, full-page newspaper ads that basically called for the execution of the Black/Latinx kids. Now grown men, they were exonerated after years of enduring injustice. Trump, to this day, has never apologized. He's shown more respect to Putin and Kim Jong Un than he has to those five men.

One thing that's not highlighted in WHEN THEY SEE US but might give you an increased sense of what drove some members of the press to be so ferocious in their hunger to get a sensational angle to the story, is the time frame of the crime. It happened in the middle of April. Trump's newspaper ads and the indictments came in May. May is a critical month for TV ratings. TV stations start gearing up for the extremely competitive May ratings period in April. Increasing viewership in May can be like a bloodsport for TV executives.

DuVernay does something we never saw in news reports. She details how the wrongful convictions crippled their lives after they'd lost their youth in prison and got out as young men. Before the real rapist/killer confessed, they were still abused by the legal system. The conviction affected family relationships and their occupational lives. They could not get work. They could not work with certain people. They were considered sex offenders. Meanwhile, people who helped put them behind bars used those convictions to launch new and lucrative careers for themselves.

Around 2003, I had a TV habit. I had to get a couple o' pizza slices on a Saturday and watch Reno 911! on Comedy Central. My sides would ache from laughing at Niecy Nash as no-nonsense Deputy Williams. Wait till you see her dramatic work as Delores Wise, the mother of Korey Wise. Wait till you see Jharrel Jerome as Korey in the last two episodes. Lord, have mercy. If Niecy Nash and Jharrel Jerome do not get Emmy nominations for WHEN THEY SEE US, there is a major malfunction in the TV academy. I'd give Ava DuVernay an Emmy right now. 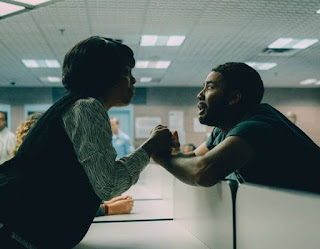 On the big screen, Jerome played young Kevin in the Best Picture Oscar winner, MOONLIGHT. His work as Korey Wise is remarkable and heartbreaking. 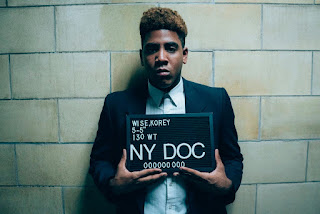 WHEN THEY SEE US is an important production. It comes to us from Director Ava DuVernay with work from another female director. Robin Swicord was director and screenwriter on the warm, witty and entertaining 2007 film, THE JANE AUSTEN BOOK CLUB. Swicord was a co-writer on two of the WHEN THEY SEE US episodes.

I just wanted to remind you that WHEN THEY SEE US is a must-see.