Classics To Find for the 4th of July

As a longtime fan of cable's TCM (Turner Classic Movies), I get an annual kick out of seeing what classic films the channel has programmed for the 4th of July. I saw that its prime time schedule has movies you'd expect to see -- YANKEE DOODLE DANDY featuring James Cagney's marvelous performance as Broadway showman George M. Cohan. It's the 1942 performance that brought Cagney a well-deserved Oscar for Best Actor. Following that are the musicals 1776 and THE MUSIC MAN, two films based on Broadway hits. In this blog post, I'll recommend a few other classics to see for the 4th of July, if you can find them. Let's start with the incomparable Barbara Stanwyck in a 1950 film called NO MAN OF HER OWN.  This neat, sharp Paramount drama was directed by the often overlooked and often underappreciated Mitchell Leisen. 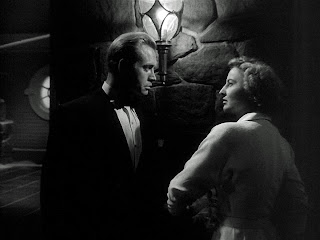 In my opinion, and in the opinion of my late mother, Stanwyck was one of Old Hollywood's greatest actresses.  Stanwyck may not have received the same number of Oscar nominations that Bette Davis, Katharine Hepburn and Greer Garson did, but she should have. Stanwyck may not have played historical queens and biographical characters as they did, but she took the grand emotions and major drama of those kind of roles and applied them to the working class modern woman. NO MAN OF HER OWN has a juicy role for Barbara Stanwyck and she delivers. Is it melodrama? Is it noir? It's a bit of both and not ashamed of it one bit. As the story opens, we're introduced to Stanwyck's character via a voiceover -- like in THE LADY EVE. Here, we see an attractive suburban block and a large attractive house. Inside, the house is lovely and comfortable. We see her tenderly holding a baby. Seated across from her is a handsome man who loves her and she loves him. However, her voiceover ends with "This is...murder." 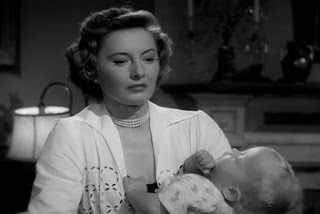 We flashback to see this woman in a desperate situation. She was romantically involved with a walking mass of pond scum who kicked her to the curb when it was discovered she was pregnant. Helen is a good woman who's had a lot of bad luck. He's some of it. He gives her a one-way train ticket from New York to San Francisco. It's the 4th of July. Pregnant, unmarried and miserable Helen is onboard the train looking like a used, unclaimed piece of luggage when a kind, young married couple offers her some comfort. Like Helen, the young bride is also pregnant. If you think a broken mirror portends bad luck, you're correct if you see NO MAN OF HER OWN. A mirror breaks and a 4th of July accident occurs. Helen finds herself with a new identity and a newborn baby. 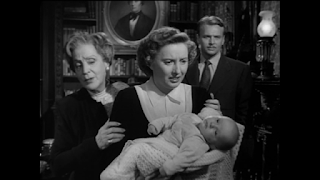 Helen is a woman willing to endure more bad luck in order to protect a child. There will be money. There will be blackmail. There will be a scene with Barbara Stanwyck's character taking a gun out of her purse right before she says "Get up. I don't want to kill you lying down." The melo-noir also shows us the strength of a mother's love. NO MAN OF HER OWN takes us from the 4th of July, to Christmas, to New Year's Eve to Valentine's Day.  It's a must-see for Barbara Stanwyck fans. What an exceptional actress she was.

Long before Kevin Kline starred in DAVE, the 1993 comedy in which he played a part-time performer who winds up drafted into some White House service because he looks like a twin brother to the President of the United States, there was Paramount's 1932 comedy called THE PHANTOM PRESIDENT. A musical entertainer looks exactly like a presidential candidate. The candidate's campaign strategists feel their guy is good but dull. They draft the charismatic entertainer into service to pretend to be the candidate for public appearances until the real candidate can develop a personality. There are a few musical numbers in this rarely-seen movie. It opens with former presidents in framed paintings singing about the state of the country. The presidents are Washington, Jefferson, Lincoln and Teddy Roosevelt. THE PHANTOM PRESIDENT stars Claudette Colbert, a lively and funny Jimmy Durante and, in a rare major studio movie role, George M. Cohan. Yes, the famed Broadway showman played onscreen by James Cagney nearly 10 years later. 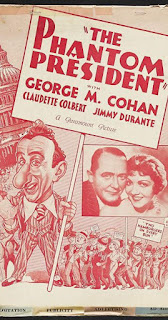 To me, James Cagney was way more charismatic as George M. Cohan in YANKEE DOODLE DANDY than the real-life George M. Cohan is in THE PHANTOM PRESIDENT. Thank Heaven for Jimmy Durante. Claudette Colbert, a couple of years before her IT HAPPENED ONE NIGHT hit, looks gorgeous as the romantic interest who gets fooled by the lookalike. 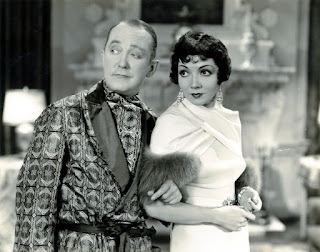 Cohan has a dance number in THE PHANTOM PRESIDENT. Unfortunately, he's in blackface. However. you see his unique and slightly eccentric style of dancing which gives you a greater appreciation for Cagney's performance. Cagney nailed Cohan's distinctive style of dance like a pro in YANKEE DOODLE DANDY. 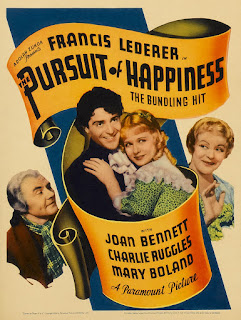 My next recommendation stars actress Joan Bennett early in her film career when she was still blonde.  The American Revolutionary War of 1776 sparks the 1934 Paramount comedy called THE PURSUIT OF HAPPINESS. The male lead is Francis Lederer, the handsome actor who played the likable French playboy in 1939's MIDNIGHT, another Paramount comedy starring Claudette Colbert. In 1934's THE PURSUIT OF HAPPINESS, Francis Lederer displays a warmth, breeziness and boyish charm that makes him absolutely huggable. He plays a German musician drafted into fighting for the British. He doesn't want to. He defects and falls for a pretty New England maiden with two madcap parents played by Charlie Ruggles and Mary Boland. Joan Bennett is very appealing as the young New England lady who introduces the sweet immigrant defector to "bundling." Think of when Charlotte Vale mentions the practice of "bundling" to Jerry in NOW, VOYAGER.  The heavy in THE PURSUIT OF HAPPINESS is a colonial militiaman thug who has his eye on the maiden. The good-looking defector also has to work around Puritan values as he romances the young lady. This short comedy is good for some Spirit of 1776 romantic amusement. Francis Lederer gives a winning performance. 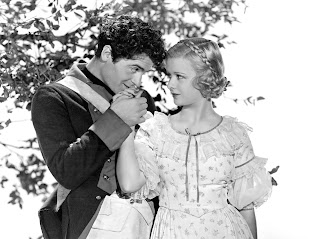 I would follow 1934's THE PURSUIT OF HAPPINESS or the musical 1776 with the 20th Century Fox musical called CENTENNIAL SUMMER. If you've ever wanted to see a Walter Brennan musical, then this 1946 release is just the feature for you. You can tell that Fox put this musical into production after having seen the grand critical and box office success of MGM's 1944 original screen musical, MEET ME IN ST. LOUIS, directed by Vincente Minnelli. In CENTENNIAL SUMMER, we meet a Philadelphia family on July 4th, 1876.

There's no Fox musical star in this Philadelphia family story. Jeanne Crain and Linda Darnell play the sisters who compete to win the heart of a Frenchman in the city to participate in the Centennial Exposition. Cornel Wilde stars as the Frenchman. The singing voices of all three performers were dubbed. However, Walter Brennan and Dorothy Gish, the former silent screen star and sister to Lillian Gish, did their own singing as the parents. This typical working class family must also prepare for a visit from the mother's ultra sophisticated and glamorous sister, deliciously played by Constance Bennett (sister of Joan Bennett).  Constance Bennett gives the movie a nice champagne fizz as Aunt Zenia. Two young beautiful sisters bickering over a Frenchman. Their mom afraid her alluring single sister will lead her husband astray.  It's not the enduring true Hollywood classic that Minnelli's poignant MEET ME IN ST. LOUIS is, but CENTENNIAL SUMMER keeps you entertained. It was directed by Otto Preminger. I learned of this film when I was kid thanks to my parents' jazz record collection. One of their favorite LPs to play was an album by Carmen McRae. On it, she sang a song called "In Love in Vain."  On the liner notes, I read that it was written by Jerome Kern and Leo Robin for a movie called CENTENNIAL SUMMER. When I discovered the movie starred Linda Darnell and Jeanne Crain, I had to see it. 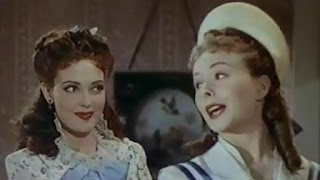 Like MEET ME IN ST. LOUIS, CENTENNIAL SUMMER produced a song that got an Oscar nomination. The silky "All Through the Day, " written by Kern and Oscar Hammerstein II was an Oscar nominee for Best Song.  Treat yourself. Here's Frank Sinatra singing "All Through the Day" when it was new to the public.
There you have it -- a few classics to find for the 4th of July or for your entertainment after the 4th of July.