Bette Davis at the Beginning

This is for serious classic film fans because I'm about the drag you way down memory lane again with a look at a major Hollywood star. In my family, I'm a second generation Bette Davis fan. When Mom had free time and there was an old Bette Davis film or a new made-for-TV Bette Davis feature on television, she'd be glued to it the way teens today are glued to their Smartphones. I still remember the sunny late afternoon when our local CBS affiliate in L.A. was airing the 1950 classic, ALL ABOUT EVE. I was in junior high -- which is now called middle school. The opening credits started. I was going to turn to the channel in search of cartoons until Mom said, "You need to watch this."  So, I did. With Mom.  I learned that Bette Davis was significant, a powerhouse of an actress who could not be ignored. 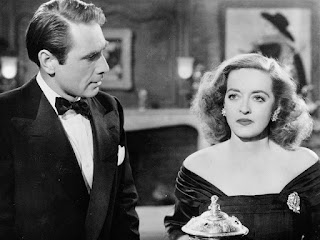 If you're a Bette Davis fan, you know that her artistry and stardom shot up like a skyrocket during her contract years at Warner Bros. which started in the 1930s. She was so serious about her craft that she took the studio to court in order to get better roles. The studio had assigned her some real hunks o' cheese in those early years.  However, even in those 2nd or 3rd rate vehicles, she popped with a 1st rate screen electricity and talent. One example: 1932's THE CABIN IN THE COTTON. I started my professional broadcast career with an FM rock radio reporter job in Milwaukee. One of my first assignments was to get a couple of soundbites from La Davis when she was in town to promote 1978's DEATH ON THE NILE. In one soundbite we played on 93 QFM, I asked her to do one of her favorite movie lines. It was from THE CABIN IN THE COTTON in which she played a flirty, self-absorbed Southern plantation belle who says to one suitor, "I'd love to kiss ya, but I just washed my hair." She did the line for me and did it with a good-natured, camp edge. 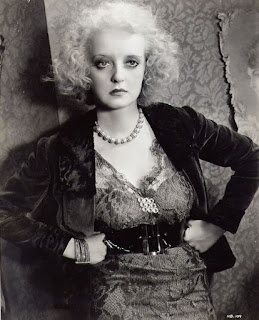 For RKO, she played the slutty waitress, Mildred Rogers, in 1934's OF HUMAN BONDAGE. That's when Hollywood really started to take notice that this young actress was a volcano in pumps. She exploded on the screen in that role. For Warner Bros., her role as the alcoholic actress in 1935's DANGEROUS earned her the first of ten Best Actress Oscar nominations and her first Oscar victory. In 1936, Davis, Leslie Howard and Humphrey Bogart starred in THE PETRIFIED FOREST. Bogart's work as the gangster on the run in this would become one of his classics. Bogart and fellow Warner Bros. employee Bette Davis would appear in MARKED WOMAN (1936), KID GALAHAD (1937) and one of Davis' brightest gems, DARK VICTORY (1939).

I recently found a short movie, 1 hour and 10 minutes long, from 1931. The movie is THE BAD SISTER and starred an actress named Sidney Fox as the bad sister. She's not bad like Veda in MILDRED PIERCE. She's just flirty smalltown Ohio girl who wishes she could have a New York City kind of life. She lives with her family. She wants to have breakfast in bed. The housekeeper basically tells her to get real and go downstairs to eat pancakes with the rest of the family. She innocently bats her eyelashes at local lads. One turns out to be a sophisticated con artist.

So why did I watch this light drama with a long-forgotten leading lady? Because the supporting actress who played the shy sister to the flirty one was a screen newcomer named -- Bette Davis. She makes her screen debut in the Universal Pictures release and you spot in the first scene. She's setting the table for breakfast while the flirty sister is still upstairs in bed.

Two things hold your interest:  1. You're watching future screen legend Bette Davis give a flat performance in her 1931 screen debut. You would never think she's the same woman who blazed onscreen in OF HUMAN BONDAGE just three years later followed by JEZEBEL (1939), THE PRIVATE LIVES OF ELIZABETH AND ESSEX (1939), THE LETTER (1940), THE LITTLE FOXES (1941), IN THIS OUR LIFE (1942) and NOW, VOYAGER (1942) … to name a few. 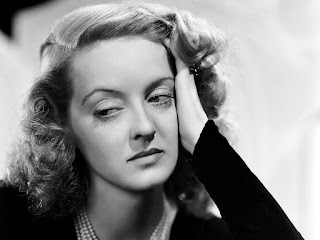 Universal didn't feel Bette Davis has screen sizzle in THE BAD SISTER. That wasn't entirely her fault. Lord knows she didn't get any help from the hair and make-up team. Her eyebrows were a bit on the caterpillar side, like those on lonely Charlotte Vale in the first 20 minutes of NOW, VOYAGER. The shy sister looks down-right dowdy. Davis has one tender scene in which her character puts her diary in the fireplace to burn after her annoying little brother has read it. Overall, the forgotten Sidney Fox pulls attention from future 2-time Best Actress Oscar winner, Bette Davis. 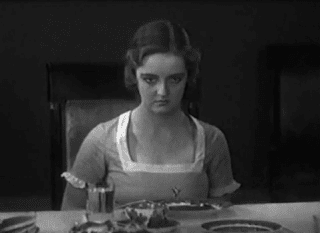 2. The next thing that holds your interest is another screen newcomer as the attractive con artist. He's played by -- Humphrey Bogart. As bland as Bette was in her first scene, Bogart's charisma registers as soon as he drives up for his first scene. Here's another future Hollywood screen legend. THE BAD SISTER marked only his fourth big screen role and he's already fluid, at ease and confident in screen acting technique. It took Bette another year of hard work and experimentation before she created "Bette Davis." When she found her inner fire and turned it up, she was a Hollywood force. Bogart seemed to have had that special spark from the get-go. 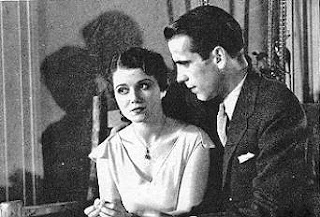 The first screen role for Bette Davis and the fourth screen role for Humphrey Bogart. Two future legendary Hollywood players at the beginning of their game. That's what makes 1931's THE BAD SISTER worth a look.