THE PAJAMA GAME marked his first time as a Broadway producer -- and the hits just kept on coming. An enormous amount of theatre history was in that one man. I heard a KNX AM radio reporter begin the news item with "He was a Prince who became a King of Broadway." We'd have to agree with that. Hal Prince died this week at age 91. As a producer and/or director, even a partial list of his credits is stunning: THE PAJAMA GAME, DAMN YANKEES, WEST SIDE STORY, FIDDLER ON THE ROOF, CABARET, COMPANY, FOLLIES, EVITA, SWEENEY TODD and THE PHANTOM OF THE OPERA. I've spent quite a bit of money seeing Hal Prince shows on Broadway with their original casts or in revival. Every single penny of the ticket price was well spent. In the 1960s, Broadway gave multi-talented Angela Lansbury the stardom that Hollywood oddly had not. A number of big name female stars had been mentioned as possibilities to take on the lead role in MAME, the 1966 Broadway musical version of the hit Broadway comedy AUNTIE MAME which then became a hit film starring Rosalind Russell, the actress who originated the role on Broadway. MAME was not a Hal Prince show, by the way. Lansbury said her name was at the bottom of the list. She was eager for employment at the time. She got the part. MAME premiered and, the next day, the show was one of the hottest tickets in town. Angela Lansbury had reinvented herself and she was the new toast of Broadway. 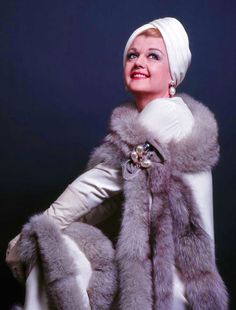 She had been under contract to MGM, the famous Hollywood studio which was the Tiffany of movie musicals. She makes her screen debut in the psychological thriller GASLIGHT (1944) and gets an Oscar nomination for Best Supporting Actress. She establishes her dramatic chops with her first assignment. She plays a sweet, emotionally abused singer in THE PICTURE OF DORIAN GRAY (1945) and gets her second Oscar nomination for Best Supporting Actress. She co-stars with Judy Garland in THE HARVEY GIRLS (1945), an original screen musical, and her singing voice is dubbed. When Lansbury's MGM days were done, she scored a third Oscar nomination for Best Supporting Actress thanks to her chilling brilliance as the manipulative political mother in THE MANCHURIAN CANDIDATE (1963). MGM never utilized Angela Lansbury's musical talents and her delicious comedy skills.  That was a huge oversight for a Hollywood studio that prided itself on making the best musicals in town.

I saw Angela Lansbury in Hal Prince's SWEENEY TODD with its score by Stephen Sondheim. I just about clapped my hands raw giving her a standing ovation when standing ovations were not a nightly occurrence. She was extraordinary, comical and conniving as Mrs. Lovett. 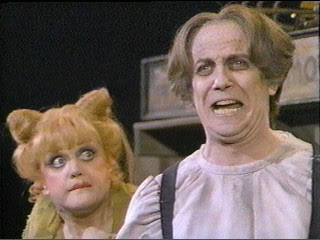 Over the weekend, I re-watched a 1970 movie that's a favorite of mine. It's a nasty little modern-day fairy tale starring Angela Lansbury in the most glamorous, the sexiest and the most wickedly funny role she'd ever been given in a film. She's opposite Michael York two years before we saw him in CABARET with Liza Minnelli. I watched this dark 1970 comedy and, yet again, said to myself "Hollywood studios really dropped the ball not giving Angela Lansbury comedy and musical comedy roles" followed by "Hal Prince did a good job with his first film."

1970's SOMETHING FOR EVERYONE, starring Angela Lansbury and Michael York, was directed by Hal Prince. He directed two film in his lifetime. This was first. And his best. 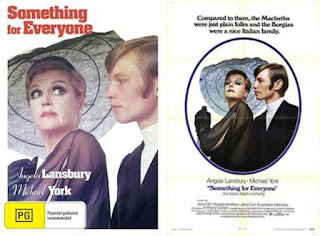 We're in Bavarian countryside, a location where residents strive to shake off the shadows of the late Adolf Hitler and World War Two. People are cheerful and pleasant in lederhosen and drinking beer. In the woods, strolls a young and handsome man named Konrad. He can charm you with his smile. Konrad is the kind of young man who would see a pretty little butterfly in the woods, catch it...and then toss it into a nearby spider's web. He is a poor young man fascinated with the Bavarian castle in the distance. He wants to live it that castle and will do whatever it takes to do so. The castle is occupied by the glacially elegant and widowed Countess von Ornstein. The Countess will do whatever it takes to keep from being low on funds again, like in the days when those Nazis "kept inviting themselves for lunch." Like Konrad, she too is an opportunist.

How can Konrad scheme to become one of her servants? How can the Countess scheme to get backrubs from Konrad without making her two children suspicious. How can she bring more money into her castle account?  I'm surprised that Hal Prince's SOMETHING FOR EVERYONE doesn't have a bigger cult following. Here's a faded trailer from its initial theatrical release.

SOMETHING FOR EVERYONE (1970). Look for that Hal Prince feature film directorial debut on Amazon. Hal Prince -- Broadway producer, director and filmmaker.

One more thing. You probably saw Angela Lansbury in THE MANCHURIAN CANDIDATE. If you never heard her as MAME, here's a cut from the original Broadway cast album. She introduced this tune by Jerry Herman. It's since become a standard we hear every year at Christmastime.