My mother was in absolute awe of Josephine Baker. She adored her. In the 1950s,before my parents married, Josephine Baker appeared onstage in Los Angeles.  Mom couldn't get Dad interested in going with her, so Mom went by herself. She said that Baker's L.A. show was fabulous.  I always loved that story. Mom was such a fan that she didn't succumb to 1950s social attitudes that a woman must always be accompanied by a male to such functions as theatrical events. Josephine Baker was a show business legend and Mom was not about to miss seeing the black entertainer who had made history in France as a performer and as a citizen who greatly aided the French Resistance during World War II.  I'm sure you're aware of Baker's history. She was a black girl from St. Louis, Missouri who headed to New York City during the Harlem Renaissance of the 1920s. She got work as a chorus dancer. At age 19, she sailed to France. Before the 1920s ended, she had become a toast of Paris and a darling of the Jazz Age with her musical act and risqué costumes. From 1927 through 1935, she starred in three French films. Starred. She was the lead actress and played characters who were wooed by white Frenchmen in tuxedos. France embraced her. French became her second language. France gave her a racial freedom she was denied in America. Hers is a fascinating story. 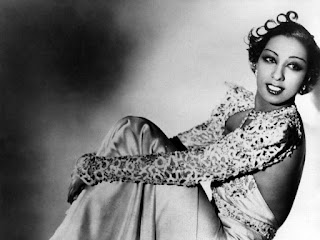 She was celebrated for her vivacious personality and her alluring attire. Before the word was over-used, she was true icon of French entertainment and black history. 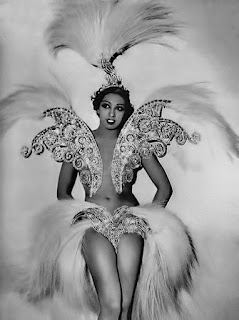 She got a visual reference in Woody Allen's ZELIG (1983) and she's portrayed by Sonia Rolland in Allen's MIDNIGHT IN PARIS (2011). The elegant American-born Folies Bergére star should have had a deluxe number in one of the glossy all-star musical revues done by Paramount or MGM. We know why she wasn't. Here she is in France's 1935 film, PRINCESS TAM TAM.
What black woman was given that sort of sophisticated and lovely presentation in a casually interracial scene in a Hollywood studio movie of the 1930s?

Mom was also a Grace Kelly fan and told me why. When Josephine Baker was refused service at New York City's famed The Stork Club, a prestigious nightclub that did not welcome black customers, Baker expressed her displeasure with the segregation. Grace Kelly was at another table, witnessed what was happening and went over to support the famous Josephine Baker. The two women left the restaurant together and remained close friends until Baker's death. Baker even challenged powerful Walter Winchell when he turned a blind eye to the nightclub's segregation. Some white men didn't have the guts to challenge Winchell. But Baker did.

The international star refused to perform for segregated audiences. 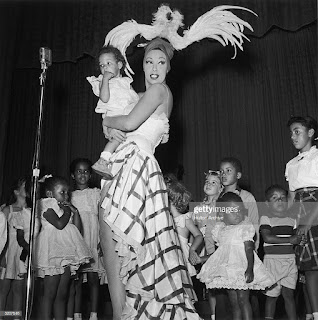 Here is a quote from Josephine Baker that feels timely and relevant today:


"My people have a country of their own to go to if they choose to...Africa...but, this America belongs to them just as much as it does to any of the white race...in some ways even more so, because they gave the sweat of their brow and their blood in slavery so that many parts of America could become prosperous and recognized in the world."

Through the early 1970s, she continued to perform. Her voice had deepened and mellowed beautifully. She retained her glamour and never veered into self-parody. Her social activism continued. She thought she'd lost her audience, but her special retrospective revue in Paris in 1975 celebrating her 50 years in show business proved otherwise. It was a sold-out hit financed by two special women -- Grace Kelly, now Princess Grace of Monaco, and Jackie Onassis. The reviews for Josephine Baker were sensational.  She'd survived bumpy financial times. Overall, she was a success as an entertainer, as a mother and as a decorated citizen to took part in social issues in France and America. In her late 60s, she died peacefully in bed four days after her triumphant opening night. She was surrounded by newspapers that all had glowing reviews of her performance. What a way to go. Decorated by France for her work helping the Resistance during WWII, she was given full French military honors at her funeral. 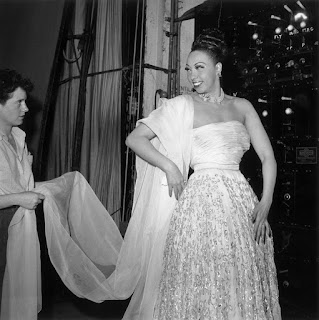 Visit a library or bookstore and read more about Josephine Baker. In the meantime, practice your dance moves to this recording of hers that's in the MIDNIGHT IN PARIS soundtrack. Enjoy.