Words Count in These Features You May Have Missed

Muscle-bound superheroes in action fantasies have such profitable popularity in cineplexes that it can be hard for smaller films to squeeze in for some attention. Folks can miss entertaining smaller films due to being dazzled by caped characters and special effects. I've got recommendations for your weekend home entertainment. These are features you may have missed in their original release. Let's start with a revenge comedy starring and directed by Jason Bateman.  It's called BAD WORDS. 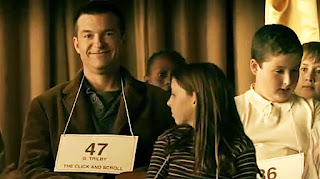 Did you see the current feel-good news story about the historic win in the 2019 Scripps National Spelling Bee? There were 8 winners. BAD WORDS takes us into a similar competition.

When I saw the trailer for BAD WORDS, I was positive I'd hate the movie. Why? Bateman's grown-up character was verbally insulting in the presence of a child. I had to see the movie because I was slated to review it on TV. I saw it with a friend. We both liked it a lot. Jason Bateman got big belly laughs from us. BAD WORDS is rude, crude, funny and heartfelt. It's a surprising and witty revenge story that employs a spelling bee championship as its mode of revenge. 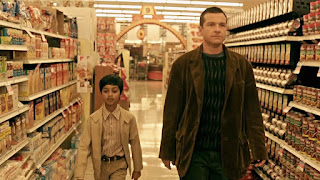 A middle-aged man and a little boy with a big I.Q. are both contestants in the same national spelling bee. They're booked in the same economy hotel on the same floor. Bateman's character finds a legal right for competition entry. He has a love-starved female reporter pal who helped him with that. Obnoxious Guy Trilby (Bateman) calls to mind Ebenezer Scrooge in A CHRISTMAS CAROL or Jack Nicholson's romance novelist character in AS GOOD AS IT GETS. He pushes people away with his rude attitude because there's a pain inside he doesn't want to reveal. Little Chaitanya, played by Rohand Chand, is his rival and the object of his sharpest verbal zingers. You're stunned at Guy's juvenile behavior towards the conservative and competitive 10-year old. Karma will balance things out. Guy eventually gets his comeuppance for that behavior.
Director Bateman skillfully shows his 40-year old character change and grow. The revelations of the hurt behind his eyes and other changes are subtle and simple. Bateman and his young co-star are good together. Kathryn Hahn is a hilarious hot mess as the smart, love-starved reporter. This movie is about the power of words, the strength we give them and what we choose to do with them. It's also about moving on with one's life. A sweet emotional depth comes through in this 90-minute comedy. Give 2013's BAD WORDS a try. 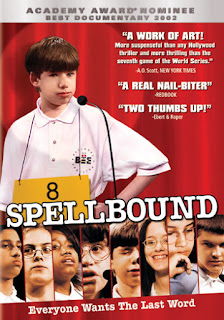 Go back to the 1999 Scripps National Spelling Bee in a fascinating 2002 documentary called SPELLBOUND. We meet 8 kids who made it to the competition which will put them in a national TV and print spotlight. This feature, like BAD WORDS, runs about 90 minutes. It packs an unexpected punch because it's not just about correct spelling and making it to that big contest. It becomes a look at social class, race, manners, privilege and the press. There's a Black girl from a tough low-income neighborhood who is about as sweet and polite as she can be. There's a Caucasian boy from an upscale family who got on my nerves when he kept acting like a Jerry Lewis character from the early 1950s. Both kids qualify for the competition. Guess which kid gets press attention.
I grew up in South Central L.A. My parents divorced during my high school years. I attended a high school in Watts just a few years after the nationally-covered Watts Riots of the 1960s. In high school, proving my love of classic films, I got myself on a movie trivia TV quiz show taped in Hollywood. It was a syndicated TV show with celebrity guests on every show. I had two celebrity teammates, Phyllis Diller and Hugh O'Brian.  I was the show's first Black contestant. Also, its youngest at the time. I was the first Black winner on THE MOVIE GAME. This all happened over a summer vacation in 1970. Mom drove me to the studio and sat in the audience. She saw me win. The episode aired months later when school was back in session. My classmates, teachers, neighbors and grandparents in New Jersey got to see it.

I didn't get any press attention for it at all. There was no mention in a local newspaper. Mom remarked to a family friend, "If he had robbed a liquor store, he'd be in the paper."

In SPELLBOUND, the single working mother of the studious Black girl who qualified for the competition makes an on-camera remark of similar sentiment. Her child was overlooked by the press. That moment pierced my heart. SPELLBOUND got an Oscar nomination for Best Documentary of 2002.

He's suave, subtle and successful. He's portrayed by Samuel L. Jackson. Yes, you read that correctly. The Broadway and film veteran delivers a  smooth performance with the luxury of playing a different type of character in a 2009 indie drama written and directed by Rodrigo Garcia. The film is called MOTHER AND CHILD. The Tony Awards will be handed out in June and Annette Bening is a nominee for Best Lead Actress. Bening is a lead actress in this drama, another feature that shows us the power of words. 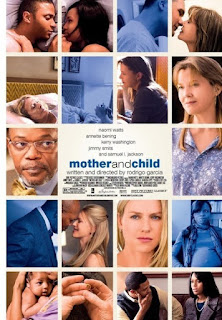 In Southern California, we meet the complicated middle-aged married woman who was an unwed mother in her teen years. She gave the baby up for adoption. Her husband coaxes her to write a letter to her unknown daughter and leave it with the Catholic agency that arranged the adoption. Bening plays this married woman. Naomi Watts plays the emotionally guarded lawyer who writes a letter to her biological mother and leaves it with the adoption agency. Kerry Washington stars as the young wife who can't get pregnant. She and her husband want to adopt a baby.  Samuel L. Jackson plays the lawyer's boss. Cherry Jones is a blessing as the nun at the Catholic adoption bureau. She's never had a child. She's not a mother. She is a modern-day nun who's a nurturing force in the intersection of these three non-virgin women.
Maybe it does get a tad melodramatic here and there in its 2 hours. I can deal with that thanks to excellent actors in fine form playing out a story of life questions and mature feelings that need to be acknowledged. I was moved. Again...the power of words. I recommend MOTHER AND CHILD.