Randall Park Is An Actor, Not a Location

Some great entertainment news I read one day in 2014 was the actor Randall Park landed the dad role in ABC's upcoming new sitcom. FRESH OFF THE BOAT made its debut in 2015. This was big TV news because it would be the first sitcom in 20 years to follow the lives and adventures of an Asian-American family. The previous one, 1994's ALL-AMERICAN GIRL starring comedian/actress Margaret Cho, flopped. I feel it flopped because executives basically turned the scripts into ALL-AMERICAN WHITE GIRL instead of letting the characters ring true from Cho's life which inspired it. FRESH OFF THE BOAT is lightly based on the memoirs of hipster chef Eddie Huang. The series took the name of Huang's book. My appreciation for Randall Park's talent was cemented in 2011.  I lived in San Francisco that year and noticed him in TV commercials. A lot of the finest acting you see on TV is in the commercials. Some of the hardest work actors do can be in commercials. I've done commercial acting assignments and I've spent 12-hour shoot days working on a one-minute commercial. When I saw Randall Park as a young husband buying a new car, I instantly recognized him from other commercials, episodes of TV shows and movies such as LARRY CROWNE starring Tom Hanks and Julia Roberts. Randall Park is a talented, versatile and handsome actor. 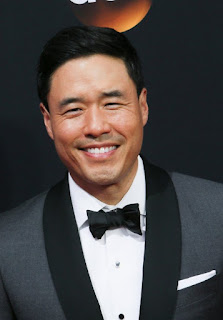 Now let me jump over to James Franco and Seth Rogen. In a James Franco comedy, there's often an undercurrent of him having a sexual fluidity and a total openness to a bromance. We eagerly wait for the energy of his sexual fluidity to cause the dam to burst, especially when he's opposite Seth Rogen. Rogen usually plays a dude who may think he's a schlub but he isn't in the eyes of the Franco character. Franco is a handsome, trim bear chaser who has a major crush on an unaware bear -- and that bear is Rogen.  Franco digs a dude who's got some meat on his bones and some fur on his frame. Give another look at the two of them in PINEAPPLE EXPRESS. Listen to how Franco's best buddies in the sci-fi apocalypse horror/comedy THIS IS THE END (2013) discuss whether or not he's ever had a same-sex encounter. Rogen is in that one too. Did you ever see James Franco and Seth Rogen lampoon Kanye West music in their Bound 2 music video? They are both on a motorcycle. It's like a bear bromance valentine. Look it up on YouTube. 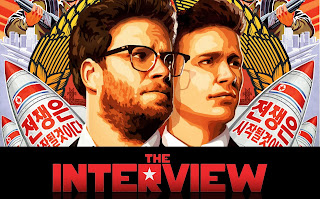 It was announced that THE INTERVIEW, a TV satire and action/comedy starring James Franco and Seth Rogen, would be opening. I wanted to see it. I did see it. Then came big drama from North Korea. Franco played sort of an "Inside Edition"-type syndicated celebrity interview show host.  Rogen plays his burdened producer trying to make the show a bit more respectable. The producer wants the show to do something that actually smacks of serious, investigative journalism. It turns out that North Korean leader Kim Jong-un is a fan of the show and likes the self-absorbed host. The host arranges for a trip overseas to interview the North Korean leader. Hilarity and foreign intrigue ensue.

In real life, stern North Korea found out about the movie and wasn't laughing. Remember back in December 2014 when networks reported that, if we paid to see THE INTERVIEW, North Korea would track us down on its GPS and shoot nuclear missiles at us while we purchased popcorn at the snack bar? This was a lead story several times on ABC's World News Tonight. Every time the ABC evening news anchor read a story about THE INTERVIEW, he mentioned that the movie starred James Franco and Seth Rogen. A future ABC star was also in the cast as a feared political leader. 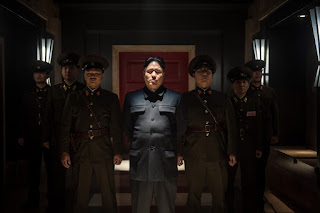 No ABC news anchor who did the story in the evening or the morning ever mentioned that Randall Park was a) in the movie as Kim Jong-un and b) would be seen as the dad in a few months when FRESH OFF THE BOAT made its prime time sitcom debut on ABC.  Again, this would be the first network sitcom in 20 years to focus on an Asian-American family. 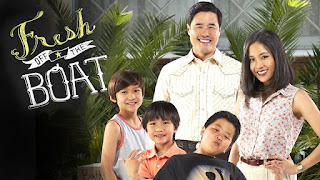 This irritated me. Not only did ABC news overlook the ethnic actor who'd soon make history joining the ABC comedy family, they overlooked the actor who stole the picture from James Franco and Seth Rogen. He's fabulously funny playing the leader as a dictator who has daddy issues, hungers for male bonding and has a soft spot in his heart for Katy Perry tunes. 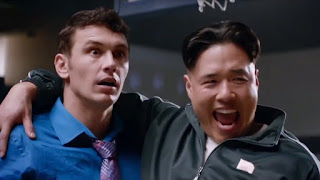 Ever since 2015, Randall Park and Constance Wu have been two of my favorite sitcom characters with their portrayals of the over-achieving suburban parents on FRESH OFF THE BOAT. However, GOOD MORNING AMERICA has never given this racially groundbreaking sitcom and cast nearly the same amount of attention it gave the ROSEANNE reboot or updates on THE BACHELOR and THE BACHELORETTE. Randall Park and Constance Wu should have Emmy nominations to their credits now for FRESH OFF THE BOAT. 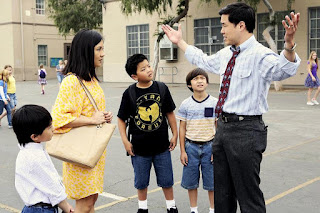 Randall Park, James Franco and Seth Rogen star in THE INTERVIEW and the controversial comedy is now on Netflix. At the end of May, Park will be seen as the leading man in a new romantic comedy called ALWAYS BE MY MAYBE. His leading lady is Ali Wong. Here's the trailer.

I will definitely be seeing ALWAYS BE MY MAYBE. More power to you, Randall Park.
at May 24, 2019