Vincente Minnelli's CABIN IN THE SKY

If there was any director at MGM in the 1940s and 50s who could have been considered a Civil Rights activist in his way, that director was Vincente Minnelli. He included Black people into the filmmaking mix, he gave Black moviegoers sophisticated images to see when they were sorely needed and he put Black performers in the spotlight. Look at THE CLOCK, THE PIRATE, THE BAND WAGON, AN AMERICAN IN PARIS. This all started with the very first film he directed, the movie version of the Broadway musical fable hit, CABIN IN THE SKY. His 1943 fantasy release was a production of the prestigious Freed Unit.  Producer/songwriter Arthur Freed produced most of the biggest gems in MGM's crown of musicals. Some of the most famous Judy Garland, Gene Kelly and Fred Astaire musicals came from the Freed Unit. Minnelli had an unmistakable, imaginative artistic style and that style makes its debut in CABIN IN THE SKY. For the film, Ethel Waters reprised her female lead role. She was the star of the Broadway musical. Eddie "Rochester" Anderson, extremely popular at the time thanks to being a regular on Jack Benny's national radio sitcom, and young singer Lena Horne were added. They were not in the Broadway cast. Horne was making the transition from fine vocalist with a band to film roles. For all the Black people in the film, this was an A-list booking.  The fantasy was Man's Struggle with Good vs. Evil. Will Joe give up gambling and be a regular church-goers like his faithful and spiritual wife? Or will that scrumptious vamp Georgia Brown lead him to temptation where he can be snatched up by Lucifer? 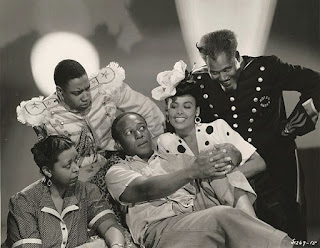 My mother guided me to see CABIN IN THE SKY one night when it was on TV during my high school years. I grew up in South Central L.A. and this was during the racially turbulent, racially progressive 1960s. My passion for new movies and classic films was already in bloom by then. I knew of CABIN IN THE SKY. I knew that Ethel Waters, like Ethel Merman, had become a Broadway musical star in the 1930s. Jazz greats Duke Ellington and Louis Armstrong were also in the cast. Mom and Dad had music by them in our record collection at home. The same applied to Lena Horne records. We had her albums. Watching her special guest appearances on network music variety shows was like a religious obligation in our household. Mom and Dad also had a hardcover copy of a Lena Horne biography that was popular at that time. An enjoyable read, it was nowhere near as revealing, surprising, fascinating and extensively research as the biography my friend James Gavin wrote. STORMY WEATHER: THE LIFE OF LENA HORNE came out in 2010. 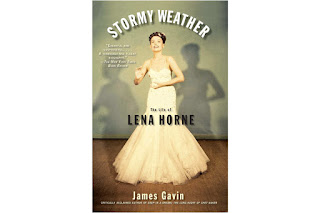 Jim found out that that the oft-told tale of Lena's movie numbers in future MGM musicals being cut out when the films played down South was more legend than truth. One theater did it but the the practice was not widespread. However, both books did touch on Lena's artistic frustration while under contract to MGM. 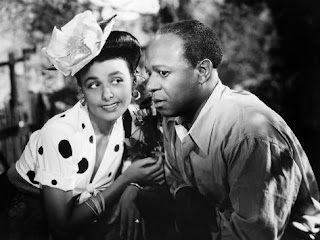 I was aware of these famous and trailblazing Black artists before I saw the movie. When I saw the CABIN IN THE SKY for the first time, I was exhilarated and angry. I was surprised at how quietly angry I was. I was just a kid in high school. But I was aware of Hollywood segregation and actors like Lena Horne being told "You're so talented, we just don't know what to do with you." Here's Lena outfitted in CABIN IN THE SKY attire while chatting with director Vincente Minnelli (left) and actor Melvyn Douglas (right.) 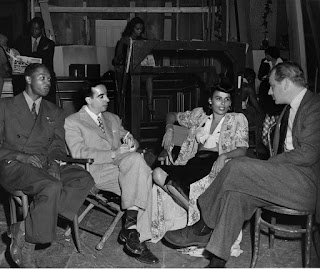 When I heard Ethel Waters sing the title tune, her voice was like a symphony orchestra unto itself. Her voice was so heavenly, it put tears in my eyes. The first song in the movie, sung in a church service, gave us an example of the Minnelli style. Black folks are seated in the pews as "Little Black Sheep" is sung and some good news is whispered from person to person. The camera shows the folks and we watch as the news is passed winding up at Ethel Waters and Butterfly McQueen seated in back. These Black folks looked clean-cut and stylish. This was extremely refreshing for Black moviegoers after years of degrading blackface numbers from Busby Berkeley in numerous Hollywood musicals. The nightclub sequence starting outside Jim Henry's Paradise took my breath away. Black folks are outside, casually conversing. They start to walk into the club. But they don't just walk. Minnelli, establishing another one his elegant hallmarks, has choreographed each walk. Each person or couple that strolls into the joint has a different cadence to the Duke Ellington music riff. Minnelli is letting us Black folks be our fabulous selves as they strut in for some nightlife. When they get inside ... bam! It's rhythmic excitement in a scene packed with couples -- excitement like in the dance at the gym almost 20 years later in WEST SIDE STORY. Inside, folks were dancing like they did at the historic Savoy Ballroom in Harlem. We viewers got one dazzling number right after another -- Duke Ellington, Lena Horne, John Bubbles (the original Sportin' Life in Gershwin's PORGY AND BESS) , Ethel Waters.  They, and the extras as dancers and other nightclub patrons, all look dapper and attractive. One of the things that hit me the most about this sequence was that the Black folks resembled the photos of smartly-dressed friends and relatives from the 1940s in my parents' family scrapbook. I could connect happily to those classic movie images. I did. Here's Ethel Waters on the CABIN IN THE SKY set with Duke Ellington and Vincente Minnelli. 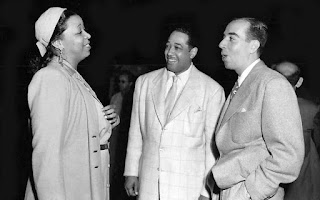 Why was I elated and bothered? Because Ethel Waters would not have another film role for seven years. She'd play an illiterate backwoods maid in Elia Kazan's 1949 race drama, PINKY, and she'd get an Oscar nomination for her performance. It would be 1959 before musical genius composer Duke Ellington would be tapped to score a film. He did 1959's ANATOMY OF A MURDER and got an Oscar nomination for 1961's PARIS BLUES. Many of those talented Black background actors would appear in other films but their names would not be added to the credits. Despite being at the Tiffany of Hollywood studios for musicals and looking absolutely glamorous as she sang in them, Lena Horne would be frustrated and limited at MGM. Her singing was terrific. But Lena was never permitted to have dialogue scenes with white actors who were her fellow players in deluxe Freed Unit musicals. Lena Horne never got to do lines and/or sing with a Judy Garland, Gene Kelly, Fred Astaire, Frank Sinatra or Ann Miller. She had the support and respect of Freed Unit top shelf talent like Vincente Minnelli, music arranger Kay Thompson and influential hair stylist Sydney Guilaroff but Hollywood, on the whole, was still racially narrow-minded in executive offices. To give an example of how limited and under-utilized gorgeous Lena Horne was at MGM, think of Dooley Wilson as Sam in 1942's CASABLANCA from Warner Bros. Wilson had key scene individual scenes with Humphrey Bogart and an important one Ingrid Bergman. Wilson had scenes with both stars together. Lena never got to do such integrated onscreen work with white MGM stars.

The fact that tremendously talented Black people were overlooked, limited and treated like second class citizens in Hollywood made me angry after I saw CABIN IN THE SKY. Mom approved of my anger. It fueled my career choices. As a film critic on national TV, as a celebrity talk show host on national TV and as an entertainment reporter, I was determined to land the kind of work denied Black people in my youth. In my work, I would seek to bring attention to others who didn't get equal opportunities. That's the impact CABIN IN THE SKY had on me.

In 1983, Lena Horne took her acclaimed, Tony-winning one-woman Broadway show on tour. I was working in Milwaukee on TV when she played there. I attended her press conference. I met the legendary Lena Horne and she offered my mother a job. She not only offered Mom a job, but when Ms. Horne was on the next leg of her tour, she flew Mom out first class and put her up in a hotel suite. I'll put the rest of that story in a book. Mom and I were both noticed by Lena Horne.

If you've never seem CABIN IN THE SKY, see it. This musical is rich with Black talent and the style of director Vincente Minnelli.
at May 18, 2019