Over the same weekend, I was able to watch two strong dramas.  I've seen both films before and these films always magnetically attract me again and again. Thanks to the Movie Channel and Showtime, I watched the 1974 classic CHINATOWN and the 2007 Oscar winner, THERE WILL BE BLOOD. They aired uncut and commercial free, just as I'd seen them in their original release. Wow. What gripping films with two elements, a pair of forces, that we have been told do not mix.  You have oil in THERE WILL BE BLOOD directed by Paul Thomas Anderson. Daniel Day-Lewis stars as an oil baron. 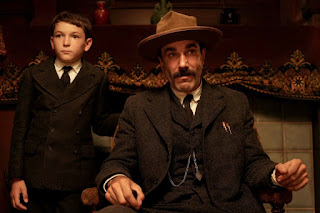 You have water in CHINATOWN directed by Roman Polanski. John Huston stars as a water tycoon.

Oil and water. Two men hungry for wealth and power. One wants oil. The other wants water. Both men are rich and ruthless and corrupt. Both men are irresponsible fathers. We never see their wives. The corruption of both male characters will cause a death. 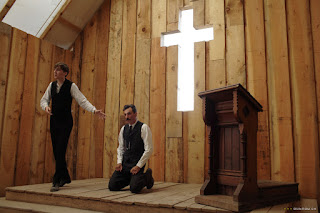 Daniel Day-Lewis starred as Daniel Plainview in THERE WILL BE BLOOD. In a church service, he will shout "I abandoned my child!" He did abandon his child, but he will continue his ruthless ways. It seems that his corruption grows the wealthier he gets and Daniel Plainview gets extremely wealthy. He may have been in a church but he will brush religion out of his life like brushing bread crumbs off his suit after having eaten his fill at a free lunch. "I'm an oil man, ladies and gentlemen." That, he truthfully states to an audience of rural folks. He will not be truthful in telling them what their land is worth -- because he wants their oil-rich land.

Daniel Day-Lewis took home one of his three Best Actor Oscars for THERE WILL BE BLOOD. When the film opened, a few critics wrote that there is no female lead in the story. I feel that the land is the lead female equivalent in THERE WILL BE BLOOD and his constant drilling of it symbolizes how he rapes the land with his greed and lust for power.

Oilman Daniel Plainview sounds like he could've been related to Noah Cross, the wicked tycoon in CHINATOWN. There's a Department of Water and Power in Los Angeles. This dark Noah wants to part the waters -- part them from L.A. during a late 1930s drought for his financial gain. Noah Cross seeks to own the water company. He will double-Cross his glacially elegant heiress daughter. CHINATOWN is a classic and exceptional example of film noir in color, masterfully directed by Roman Polanski. THERE WILL BE BLOOD was based on the novel OIL! by Upton Sinclair. CHINATOWN comes from a brilliant original screenplay by Robert Towne. Jack Nicholson stars as private eye J.J. "Jake" Gittes and Faye Dunaway is perfect as heiress Evelyn Mulwray.

If you've never seen CHINATOWN, make it a must-see on your movie rental list. Pay close attention. The screenplay is intelligent. Words and visual images echo with more than one meaning. I felt a new chill of evil when I watched it again over the weekend. For those of you who have seen it, you know how the characters in Los Angeles are complaining of the drought and the heat. When Jake drives over to the Evelyn and Hollis Mulwray mansion, that home has a lush and sprawling green lawn in front of it. Hollis is a top executive at the L.A. Department of Water and Power.  Noah Cross is his father-in-law.  There's a verdant lawn in the backyard too where an Asian gardener tends to the horticulture and the man-made pond. The backyard and the pond also show no sign of suffering from the Los Angeles drought. 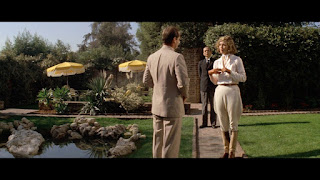 Think about the last act of the drama. Jake Gittes, hot to uncover who's committed a murder and why, returns to Evelyn Mulwray's backyard and hears the Asian gardener say "Salt water very bad for grass."

Jake spots something in the pond and points it out to the gardener. Watch as the gardener, wearing high boots, steps into the pond. The wide shot gives us an idea of how deep the water in the pond is. Think about what happened in the pond. That is chilling. Says the rich, malevolent Noah Cross to the private eye, "You see, Mr. Gittes, most people never have to face the fact that at the right time and the right place, they're capable of...anything."

Oil and water. Water and power. Father and child. What a pair of memorable films and what a pair of bad dads in THERE WILL BE BLOOD and CHINATOWN.