Happy Anniversary, STEEL MAGNOLIAS. To celebrate its 30th anniversary, the full-of-female power box office hit will get special screenings in theaters May 21st and 22nd.  Wow. Has it been 30 years already? I remember vividly the first time I saw it. There was a screening for critics and it was held in the Brill Building. This was one of the most comfortable screening rooms in Manhattan, located in the theater district. I was working on VH1 at the time. I had my own prime time weeknight celebrity talk show. I needed to see the film because I'd be talking about it in my veejay segments and interviewing a couple of its stars. 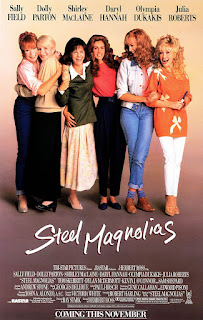 As usual, when I attended a press screening, I enter and give a nod to every other Black person I see whenever I'd see them. I'd been to many screenings where I'd been the only one. When I strolled into the Brill Building screening room -- early enough to get a good seat -- my jaw went slack as I spotted and nodded to another Black person present. She was seated in the last row with friends. It was Oprah. I took an aisle seat in the middle. The screening room was packed by the time the movie started. Rex Reed sat in the row in front me. The late Joel Siegel of GOOD MORNING AMERICA sat right behind me and sobbed loudly throughout the funeral scenes. I am sure we all left that screening room knowing that moviegoers would love STEEL MAGNOLIAS.
Olympia Dukakis was a totally cool guest on my show. On the show, she told us that she was a hardcore fan of The Grateful Dead. When she was cast in STEEL MAGNOLIAS, she'd won a Best Supporting Actress Oscar for playing to Italian mother in 1987's MOONSTRUCK starring Cher. Just like Beulah Bondi opposite Thomas Mitchell in MAKE WAY FOR TOMORROW (1937) and Angela Lansbury opposite Laurence Harvey in THE MANCHURIAN CANDIDATE (1962), Olympia was one those actresses who played a movie mother to an actor who, in real life, was less than 7 years in the same age category as she. Olympia Dukakis played a mom to leading man Dustin Hoffman in JOHN AND MARY (1969). She was only 6 years older than Hoffman. Dukakis got the role in MOONSTRUCK after the film's director, Norman Jewison, saw her on Broadway in a play directed by Mike Nichols. The comedy play, SOCIAL SECURITY, starred Marlo Thomas, Ron Silver and Joanna Gleason. Yes, Olympia Dukakis played a mom in that too. 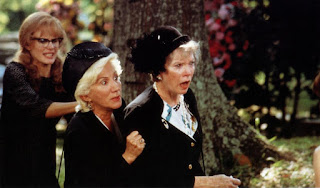 One of the things we love most about 1989's STEEL MAGNOLIAS is watching Olympia Dukakis as Clairee hurl hilarious wisecracks at the always-cranky Ouiser played by Shirley MacLaine. Olympia Dukakis worked with Shirley MacLaine's brother, Warren Beatty, way back when her film career was so new that she was basically a background actor. In the 1964 mental health drama called LILITH, starring Warren Beatty and Jean Seberg, look for Olympia in a few shots as one of the patients in the mental institution. She's one of the extras in the bridge scene with Beatty.

Sally Field has been a hero, inspiration and a role model to me since the 1970s. I feel like I grew up with her. I was a devoted fan of her sitcom work. I watched her as GIDGET, THE FLYING NUN and THE GIRL WITH SOMETHING EXTRA. It made me angry that critics seemed to overlook her impressive work in made-for-TV dramatic movies on ABC. She was not taken seriously.  I cheered when she slammed across that galvanizing performance as a schizophrenic named SYBIL. With her work as the young woman suffering from multiple personalities, SYBIL was a 1976 NBC mini-series that had everybody talking about Sally Field's stunning portayal. Then came her landmark film career.

Shirley MacLaine was a marvelous guest on my VH1 show. We started gabbing in the green room and continued on the set. She got her Best Actress Oscar for TERMS OF ENDEARMENT (1983), a classic written and directed by James L. Brooks. Here's a clip of Shirley and me talking about the James L. Brooks experience.
Shirley went on to tell me that the accent she had planed to use for Aurora Greenway in TERMS OF ENDEARMENT is the accent she later used for Ouiser in STEEL MAGNOLIAS.
Herbert Ross directed STEEL MAGNOLIAS. Previously, he'd directed MacLaine to a Best Actress Oscar nomination for 1977's THE TURNING POINT. Herbert Ross also directed Barbra Streisand in THE OWL AND THE PUSSYCAT (1970) and FUNNY LADY (1975), George Burns to an Oscar victory for THE SUNSHINE BOYS (1975) and plus Marsha Mason, Quinn Cummings and Richard Dreyfuss to Oscar nominations for THE GOODBYE GIRL (1977). Dreyfuss won Best Actor. 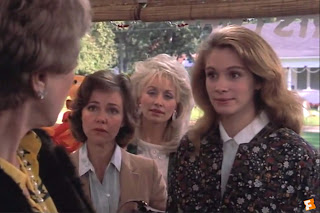 Reportedly, Herbert Ross initially was quite a bit rough on newcomer Julia Roberts. When it looked as though her self-confidence was shaken, the veterans formed a supportive sisterhood circle around her. Julia Roberts got a Best Supporting Actress Oscar nomination for STEEL MAGNOLIAS. Her next release would be PRETTY WOMAN. That film brought her an Oscar nomination for Best Actress of 1990. PRETTY WOMAN's popularity and box office take were huge and made Julia Roberts one of the biggest, brightest new stars in Hollywood. Julia Roberts won the Best Actress Oscar for ERIN BROCKOVICH (2000). There's now a musical version of PRETTY WOMAN on Broadway.

I saw STEEL MAGNOLIAS in New York City before its film adaptation. I loved it. Robert Harling wrote the play. Onstage, it has an all-female cast. There's no man in it at all. Just like 1939's THE WOMEN which was also based on a hit play. Harling wrote the screenplay. For the film adaptation, he opened up the action of his story and he added men -- just like MGM's 1956 remake of THE WOMEN, called THE OPPOSITE SEX, added men. After the movie success of his STEEL MAGNOLIAS, Robert Harling went on to write screenplays for the comedy SOAPDISH (1991) and THE FIRST WIVES CLUB (1996). You can see him onscreen in STEEL MAGNOLIAS as a minister.

For ticket and showtime info on the special STEEL MAGNOLIAS screenings this week, go here:
www.fathomevents.com.
at May 20, 2019