During World War 2, famed Hollywood producer David O. Selznick put together another A-list movie.  SINCE YOU WENT AWAY brought moviegoers into the lives of three women -- a mother and her two daughters. The wife and mother worries about her husband, the daughters worry about their dad and all three bond lovingly together to keep the home fires burning.  They'll take in a lodger, one daughter will fall in love with sweet young soldier on leave and they'll take an active part in helping the war effort by joining the labor force outside the home. It's a sentimental tale of love and struggles in a typical American home, a movie with punch and heartbreak. This moving take is beautifully produced, very well-acted and the black and white cinematography by Stanley Cortez is absolutely rich and evocative. SINCE YOU WENT AWAY was directed by John Cromwell. You've seen his tall, lean, talented actor son James Cromwell in the following films: BABE, L.A. CONFIDENTIAL, THE GREEN MILE, THE QUEEN and THE ARTIST.  John Cromwell's SINCE YOU WENT AWAY got several Oscar nominations including Best Picture, Best Actress (Claudette Colbert, middle) and Best Supporting Actress (Jennifer Jones, right). 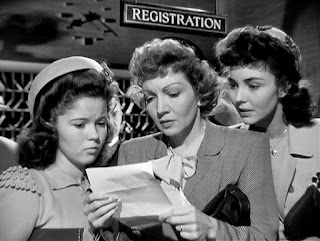 Right now, you may be saying "Where's the black history in all that?" One of the supporting players in the film is an Oscar-winning actress who worked previously for David O. Selznick in his most legendary Hollywood success. Hattie McDaniel of GONE WITH THE WIND. As you know, Hattie was the first Black performer ever nominated for an Oscar and she was the first to win. This versatile, under-utilized and groundbreaking talent won the Best Supporting Actress Oscar for 1939's GONE WITH THE WIND, a Civil War epic. She played "Mammy." True, in SINCE YOU WENT AWAY, another wartime drama from Selznick, she's a maid again but she's a modern-day domestic in the suburbs. Also, she has the most stylish wardrobe in this feature than she did in any other. Hattie McDaniel looks fabulous in SINCE YOU WENT AWAY. She's a domestic who's dressed like she's off to see a hit Broadway show after she has a cocktail at Sardi's. 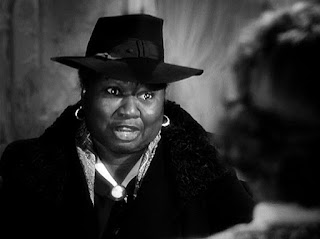 However, this is still a Hollywood film in the old studio days. You see familiar actor faces in this movie but the main faces are the three females at home. Claudette Colbert stars as the loving wife and mother. Jennifer Jones and Shirley Temple play her teen daughters. Joseph Cotten, Robert Walker, Monty Woolley, Agnes Moorehead and Keenan Wynn are also featured.  Here's a publicity cast photo for 1944's SINCE YOU WENT AWAY. Three of its stars had won Oscars. Claudette Colbert won Best Actress for 1934's IT HAPPENED ONE NIGHT, Jennifer Jones won Best Actress for 1943's THE SONG OF BERNADETTE and Hattie McDaniel got her Oscar for 1939's GONE WITH THE WIND. Notice that one of the Oscar-winning ladies is not in the photo. 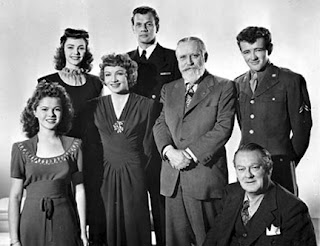 Hattie should be in the photo. She had a supporting role and she acts opposite the movie's three main stars. She was an Oscar-winner by then. But she was also Black in Old Hollywood. 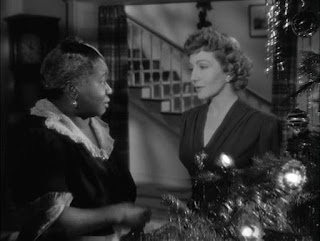 There's a famous farewell scene in SINCE YOU WENT AWAY. Jennifer Jones, as the oldest daughter, falls in love with a shy young soldier played by Robert Walker. We follow the two young sweethearts to the train station for their poignant goodbye. The station is busy. As we are walked through the crowd, we see an African-American soldier in officer's attire. He's noticeable because most Hollywood movies of that era about WW2 didn't show Black GIs. And this man was an officer. The well-dressed lovely lady playing his wife has one line in that scene.

The actress who had one line as the Army officer's wife was Dorothy Dandridge. Dorothy Dandridge would go on to make Hollywood history herself.  She'd be the first Black woman to be an Oscar nominee for Best Actress thanks to her sizzling performance in the 1954 musical drama, CARMEN JONES.

Hattie McDaniel and Dorothy Dandridge in the same movie.  That is some Black History in 1944's SINCE YOU WENT AWAY.
at May 12, 2019