Movies You May Have Missed

In work that I've done as a film reviewer on national radio and national TV from 2006 to recent guest appearances, I've seen some films that you may have missed. Fortunately. However, I've seen some films dwarfed in the movie marketplace by the likes of a SPIDER-MAN, WONDER WOMAN or a new STAR WARS adventure that absolutely deserved more attention and had something about them that won my heart. Here, I will share a few of those movies with you. 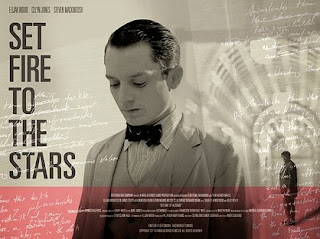 Elijah Wood secured definite movie stardom as Frodo Baggins in the Oscar-winning LORD OF THE RINGS trilogy.  In 2014, I saw Elijah Wood in a black and white drama based on a true story. Called SET FIRE TO THE STARS, this independent film presents some of the best Wood I've seen since his fantasy features as Frodo Baggins. Set in a 1950s New York City, Elijah Wood stars as a struggling poet whose life gets a major jolt when he spends a week with his hard-drinking, hell-raising, gifted hero -- poet Dylan Thomas. John Brinnin (Wood) invited Thomas to New York City for a series of poetry readings.  The film runs only about 95 minutes and was shot in the United Kingdom with a U.K. cast. What I love most about SET FIRE TO THE STARS is the dynamic and moving performance from Celyn Jones as Dylan Thomas. It's the kind of performance that should've made Hollywood casting directors and Broadway producers want to get in touch with his agent. He's magnetic as the famed Welsh poet and he co-wrote the screenplay. 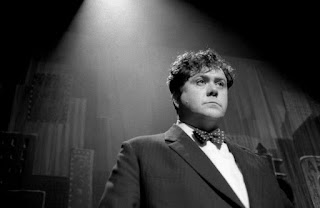 Around the time this movie was playing at an arthouse theater in New York City, Elijah Wood was a bright guest on ABC's THE VIEW one day. But none of the ladies who host mentioned his new movie. Damn! Had I been on the show as a guest host, viewers would have known about SET FIRE TO THE STARS. You can find it now on Amazon Prime. Here's a trailer.
One actor who, since 2014, has given me lots of belly laughs as I sat in my movie theater seat is Ralph Fiennes. Yes, the same Ralph Fiennes who starred in deep-dish dramas such as QUIZ SHOW, THE ENGLISH PATIENT and THE CONSTANT GARDENER.  In Wes Anderson's THE GRAND BUDAPEST HOTEL, Ralph Fiennes surprised us all with the kind of madcap sophisticated comedy performance that one would've associated with a classic Preston Sturges comedy in the 1940s. He plays Gustave, the noted concierge of a deluxe ski resort European hotel in the 1930s. The debonair Gustave tends to all his guests' needs -- especially the sexual needs of the rich older ladies staying there. When I say "older," I don't mean like Mrs. Robinson in THE GRADUATE. I mean much older -- like Sophia in TV's THE GOLDEN GIRLS. This is one fabulous hotel. 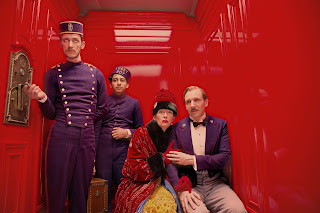 An immigrant named Zero gets a job as a new Lobby Boy in the hotel. He soon becomes one of Gustave's dearest friends. Gustave is framed for murder. Zero has quite the adventure helping to prove Gustave's innocence. While doing that, Zero falls in love. THE GRAND BUDAPEST HOTEL is visually pleasing with its production design colors that look like they're on sweets inside of a gourmet pastry shop. With the wacky murder plot, more murders are on the way. War and fascism have broken out in the land. Gustave is loyal to his immigrant friend as danger approaches. THE GRAND BUDAPEST HOTEL is about the end of an era of civility, grace and charm. Things that marked the "Old World."  Tony Revolori, a Latino actor from Southern California, is terrific as Zero, the Lobby Boy. He should be getting other good A-list Hollywood script offers.  Ralph Fiennes should have been a Best Actor Oscar nominee for THE GRAND BUDAPEST HOTEL.
Mr. Fiennes went on to hit another comedy home run with his performance as the exasperated 1950s Hollywood director in 2016's HAIL, CAESAR! by the Coen Brothers. In it, he's a refined veteran director assigned to turn a cowboy star who's always on horseback into a leading man in a sophisticated Noel Coward-like drama. In that supporting comedy role, Fiennes is one of the highlights of the film. He gives us more giggles as the voice of Alfred in 2017's THE LEGO BATMAN MOVIE.

If you're a Benicio Del Toro fan, you must see 2007's THINGS WE LOST IN THE FIRE. He's amazing in this drama co-starring Halle Berry. I feel that Scandinavian director Susanne Bier guided Berry through her best film following her historic Best Actress Oscar win for MONSTER'S BALL. Ironically, this film suffered because it opened nationwide the same weekend that a major, devastating wildfire roared through Southern California. The wildfire was a lead national news story. It forced evacuations and it affected box office attendance that weekend in the large California market. Millions of moviegoers missed a heartfelt, moving film with fine performances. 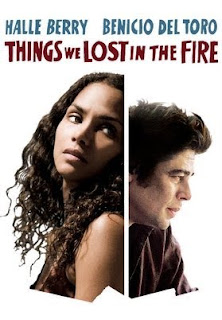 Halle Berry plays a wife and mother who has a good suburban life and a very happy marriage. She's married to a man who has always put kindness into action. He dies. She feels obliged to invite one of his closest friends to the funeral. However, she's reluctant to proffer the invitation. The friend, Jerry, is a recovering drug addict. He will come to the funeral service and, in time, help her break through the grief that has emotionally immobilized her. THINGS WE LOST IN THE FIRE is about forgiveness. It is a melodrama about two wounded people brought together by someone who always tried to do the right thing. Bier gives Halle Berry the kind of role that Hollywood automatically gave to white actresses. David Duchovny plays the husband. It's an interracial marriage, as we can see, but that is not an underlined item in the story. It's a marriage that happens to be interracial because of the actress cast in the role. Here's a clip from THINGS WE LOST IN THE FIRE.
Imaginative. Terrifying. Witty. Wonderful. Those are words I use to describe one of the best horror movies I've seen in years. It's a modern-day vampire movie. A feminist vampire movie. This is another black and white independent feature and it's the 2014 work of a female filmmaker.  Ana Lily Amipour is the director and writer of A GIRL WALKS HOME ALONE AT NIGHT. If you're familiar with how Bela Lugosi was styled in the 1930s as DRACULA, you'll appreciate the cleverness of this thriller even more. The story takes place in a culturally arid and financially depressed Iranian city. Loneliness and despair are in the air. Death is present in the form of a female vampire in a society not known for gender equality. The vampire's burka doubles as her cape.

A GIRL WALKS HOME ALONE AT NIGHT is gorgeously photographed. You would think this was really shot in the Middle East. Wrong. It was shot around Bakersfield, California. The director/screenwriter said that she did not purposely set out to make a "feminist" vampire movie. However, you can't help but notice that the vampire's victims were abusive men. She gives you chills when you see her expose her fangs and take a victim. She's a horror. And she's also lonely. There is one young man who makes her put her fangs away. He's a gentleman. She likes him. She's attracted to him. He's just a local dude going home after a party. He's a little buzzed from drinking. By the way, he was at a costume party ... and he's dressed as Dracula. An unlikely romance ensues. Here's a short video in which the director tells us about one scene in A GIRL WALKS HOME ALONE AT NIGHT.
There you have it. Four films you may have missed. Four films with performances I love. Two of the movies are from female filmmakers. Check them out, if you have time.
at May 01, 2019