Noah Wyle on THE RED LINE

I was watching Sunday night TV a few weeks ago. A new limited series drama was making its premiere. Honestly, I had not intended to watch it but there was nothing else on that I wanted to see. I just left the channel where it was. I am very glad I did. There was a performance in the show of such emotional rawness and realness that I could not look away. My attention had been grabbed, my heart and soul were moved. I did not go to the kitchen for a snack. I got off social media. I paid full attention like we used to in the old days before Twitter, Facebook and remote controls. If you want to experience a powerful and poignant performance, you must see Noah Wyle in THE RED LINE. This series, co-produced by Ava DuVernay, airs on CBS. I believe the final chapters air this coming Sunday. You can also see it on Amazon Prime Video.  Noah Wyle was quite popular Dr. John Carter on NBC's hit hospital drama, ER, back in the day.  In THE RED LINE, he plays a Chicago high school teacher whose husband is a hospital doctor. 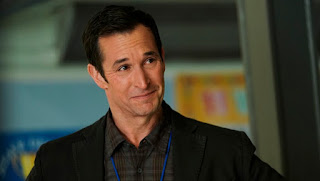 The couple has an adopted Black daughter. The happiness of their home is cruelly disrupted in the first twenty minutes of the premiere episode when the doctor is killed during crime activity. He had stopped into a convenience store to buy milk. Watch this short news piece.
Noah Wyle's portrayal of a middle-aged gay dad who is suddenly a widower has such nuance and depth and truth that I not only felt he was someone I knew personally, he made me heartsore with his accurate projection of sensitive, aching feelings I've had. He did this occasionally with just a weary, wounded look. He didn't even need dialogue. All the complex emotions were right there in his eyes. His husband's murder instantly becomes a top story in Chicago news. LGBTQ and Black Lives Matter advocates get involved. With the loss of her Black dad, the daughter now yearns to meet her birth mother. The daughter is a high school student.

There are racial conflicts, intersections, police and politicians, shocks and surprises. Aliyah Royale stands out as the loving and understandably troubled adopted daughter. This is another strong performance. Previously, Aliyah was a contestant on PROJECT RUNWAY. 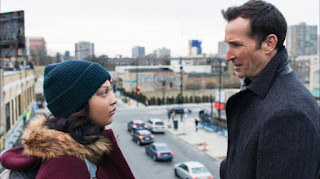 THE RED LINE is well-written, very well-cast and handsomely photographed. A few episodes were directed by Kevin Hooks. Hooks is now a veteran TV director. You may remember him from his acting days. When he was a kid, he played the son opposite Cicely Tyson and Paul Sounder in the 1972 classic, SOUNDER.

THE RED LINE is a good production. Again, I highly praise and highly recommend the performance by Noah Wyle. His working class character is a more dimensional, more complicated gay man than we usually see now in episodic television. There's one sequence that takes place at a gala Chicago LGBTQ event. Teacher Daniel Calder (Noah Wyle) is asked to attend and speak. He's still absorbed by grief. He enters the ballroom and sees a Queer Eye-like group posing for photographers. Each member of the Queer Eye-like group is wearing a suit that's a bright color seen in the gay rights rainbow flag. There was a double look of loss in the teacher's eyes. There was his loss as a widower and the new feeling of loss within his community as a middle-aged widower. How does he now fit in with younger gay guys wearing festive rainbow suits and being fabulous? As a gay man who was a widower in my 40s, I knew exactly how he felt. The speech Daniel Calder gives later in the sequence left me limp. Noah Wyle had me in tears. He broke my heart with the naked pain of his character, a man who tries to hold it all together. This gay man is a "kitchen sink" character and that is refreshing to see. I could connect to him.

Bravo, Noah Wyle. Bravo. Your work on THE RED LINE is excellent.  It's one of the best performances I've seen on network television this year.
at May 15, 2019