British Movies You May Have Missed

Again, I'm going back to my years of reviewing new movies on national TV to recommend a couple of good movies you may have missed. The two films in this post are foreign films. Both came to us from Great Britain. The first one is a gentle feature that runs about 90 minutes and gives the lead role to that wonderfully gifted actor, Eddie Marsan. This 2013 British film is STILL LIFE, gracefully directed by Uberto Pasolini. TV viewers here in America will recognize Eddie Marsan immediately as the guy who plays Terry on Showtime's gritty RAY DONOVAN series. Terry, Ray's brother, is a former boxer diagnosed with Parkinson's disease. In STILL LIFE, Eddie Marsan fights for the dead and forgotten. He's a case worker who tracks down next-of-kin to arrange respectful funeral services for the town's unclaimed dead. He's a polite man, dedicated to his job. This may not sound like an exciting plot, but stay with it. Marsan is marvelous in the role. 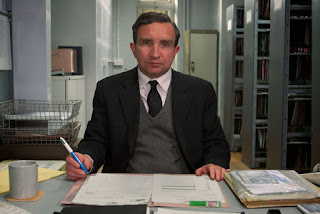 The dead people died alone with no loved ones who kept in constant contact. The case worker himself is like the people who passed away. There is no loved one who keeps in touch with him. He lives alone. He eats alone. At several funeral services, this mild-mannered case worker is often the only person in attendance. Just because his life is simple and without frills, that doesn't mean he lacks personality and passion. He truly cares about providing some dignity for the dead. He wants them to be remembered. As he goes about his sterile job, his life begins to change and take on some color. Something sweet and unexpected enters. 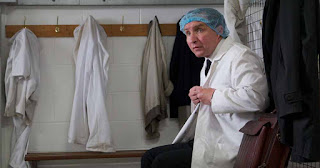 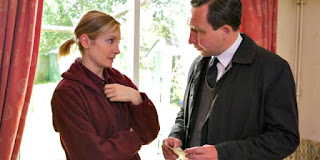 Marsan brings nice layers to this ordinary, overlooked fellow who appears to exist in a still life -- like a painting in which there seems to be no activity. It's a lovely and intelligent performance. Marsan shows this character come to life again, in a way, like trees in the spring.  Eddie Marson in STILL LIFE delivers a performance right up there with the one Alec Guinness gave in the 1950 British classic, LAST HOLIDAY. I highly recommend this thoughtful, poignant film.
To give you examples of Eddie Marsan's amazing range as an actor, watch him in Mike Leigh's 2008 British film, HAPPY-GO-LUCKY starring Sally Hawkins. This should've brought Hawkins her first Oscar nomination. She played Poppy, a working class woman whose bright and constantly optimistic outlook cannot be darkened. Not even when her driving instructor's temper explodes and he's so full of rage trying to teach her how to drive that he turns about as red as a fire hydrant. Marsan plays the hot-tempered driving instructor.

After that, see if you can find copies of the medieval sitcom, GALAVANT, on Netflix. It had a short bur hilarious network run on ABC in 2016. GALAVANT had a lot of that MONTY PYTHON AND THE HOLY GRAIL flavor. The last three episodes are among the funniest in the lot and Eddie Marsan is a knockout in the episode called "Love and Death." He played Death -- and Death has a fabulous musical production number.

Mike Sargent. My big, Black buddy who lives in Harlem. Mike is a veteran film critic who had his own Saturday film review/interview show that aired on cable TV out of New York City. He was the host. On every show, he was joined by two guest critics. One was always a female because women of all colors had been excluded from the field of film critics on national TV for a long, long time. Mike's a burly, sweet hetero bear of guy who put a weekly TV spotlight on women directors, LGBT filmmakers and foreign features. I loved doing his show. On one edition, three of us Black film critics -- Mike, a guest female film critic and myself -- gave high praise to STILL LIFE. He and I loved another British film too. 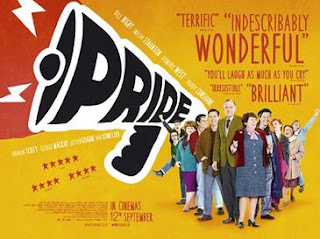 Mike called me one day and enthusiastically said, "You have got to see this new movie called PRIDE." I already had and I shared his enthusiasm. PRIDE is a 2014 film, based on a major 1980s news story in Great Britain during the reign of Margaret Thatcher. Mike and I didn't recall hearing about this British news story in American reports. PRIDE should've had better promotion here in the States. Moviegoers saw the above poster but they had no idea the actors were portraying real people. 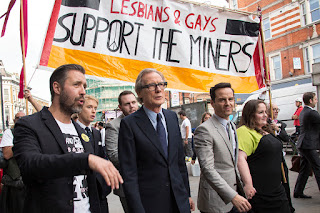 The 1984 strike of miners in Wales was a U.K. news headline. In London, gay and lesbian activists were shouting out loud for LGBT civil rights. Those LGBT activists realized that they had something in common with the financially struggling miners and their families. They were all challenging Margaret Thatcher, the cops and the conservative party. The LGBT activists raised money for the needy British miners and their families, This led to an unlikely alliance with heterosexuals and the beginning of the "Lesbians and Gays Support the Miners" campaign. It's a fascinating story of two disenfranchised communities, groups of different sexual orientation, who open their minds and hearts to each other and come together for a good cause. There are excellent performances in this inspirational film which has Bill Nighy, Imelda Staunton, Dominic West, Paddy Considine and Russell Tovey in the cast. PRIDE is worth your time.
I'm still surprised there was no campaign to get Imelda Staunton a Best Supporting Actress of 2014 Oscar nomination for PRIDE. Tell her there's a couple of Black film critics in New York City who felt she should've been a nominee. 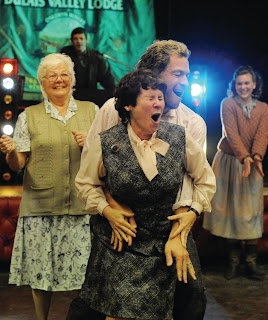 There you have it. Two British films that had a short flight under the radar in U.S. movie theaters but they are first class films that I wholeheartedly recommend.