Doris Day and a Song I Love

I bet I'm not alone in this. Hearing that Doris Day died was like getting the news that a beloved relative had passed away. She made me smile for most of my life. I first discovered her movies on local Channel 9 in my Los Angeles youth. To come home from school and find CALAMITY JANE, LULLABY OF BROADWAY, TEA FOR TWO, APRIL IN PARIS, MY DREAM IS YOURS or THE PAJAMA GAME on TV was all I needed to be in a state of total happiness. Just Doris Day -- and an after school snack. Such was some of my 1960s boyhood. 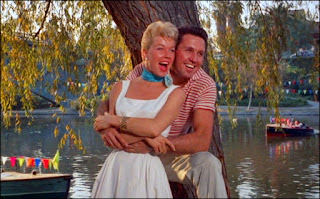 In 2005 back in New York City, I was putting together some new demo reels. My editor was a young Eastern European dude who, in the 1980s, was a little boy with his family behind the Iron Curtain. One of my pieces for my local morning TV news show years had a clip of Doris Day singing in one of her Warner Bros musicals. As soon as my editor saw her face appear on the monitor, he broke out into a huge smile. Behind the Iron Curtain, they could get Doris Day movies on TV. He said that the sound of her singing and the sight of her face always made him so happy when he was a youngster. Doris Day gave the same rush of joy to a Czech kid behind the Iron Curtain that she gave to a Black kid in South Central Los Angeles. 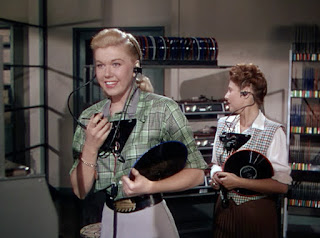 Did you ever see the 1954 remake of A STAR IS BORN? The remake screenplay by Moss Hart was well-tailored for the talents of Judy Garland. For the 1954 version directed by George Cukor, Esther Blodgett was the singer with a big band before she's discovered by Hollywood forces and her named is changed to Vicki Lester. A big star had been slated to make a musical for a major studio but there was some sort of a contractual snag. The studio takes a chance on Esther Blodgett/Vicki Lester. She makes her movie debut and … a star is born.

Doris Day was like a real-life version of that 1954 Vicki Lester. She was a singer with a well-known band. Warner Brothers took a chance on her when Betty Hutton reportedly was unavailable, enabling Doris to make her big screen debut in 1948. Within five years, Doris had shot up to being one of the top stars on the Warner Bros. lot. She'll make CALAMITY JANE. The original musical comedy, a western, will have her acting, dancing and singing new songs written for her. She'll introduce a new song, "Secret Love," that will be a hit record and win the Oscar for Best Song. Doris Day's name will appear on the big screen before the title in the opening credits. 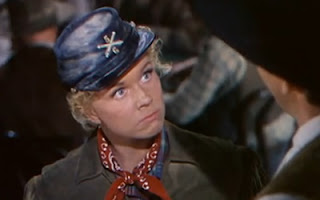 After 1953's CALAMITY JANE, Doris Day took her All-American, sunny image and played its dark side. She should've been a Best Actress Oscar nominee for her dramatic work in the 1955 musical biopic, LOVE ME OR LEAVE. James Cagney, her leading man, was in awe of Day's natural dramatic acting ability and praised it highly in his autobiography. He made two films with her, one comedy and one drama. He urged her to never take acting lessons the studio. He told her to continue using her natural instincts. He felt that, if Warner Bros. put her through its acting classes, she'd become like a Pringles potato chip. She'd have the same look and style as the other actress put through the process. She never took any acting classes. Doris Day played singer Ruth Etting opposite Cagney.  In the movie, the ambitious singer gets hooked up with a known hood who can help get her to where she wants to go. She can be feminine. She can also be as tough as he is. She followed it with another dramatic part. The played the tourist wife and mother whose sunny disposition darkens with despair when something sinister happens to her little boy during the overseas vacation. Hitchcock's 1956 remake of THE MAN WHO KNEW TOO MUCH was a thriller in which Doris introduced a new song -- "Que Sera, Sera" -- and played a wife who reclaims her voice in a husband-dominated marriage.  Doris' emotional breakdown scene in which the wife is told her son has been kidnapped was further proof of her impressive dramatic skills. "Que Sera, Sera" won the Oscar for Best Song.

There was such high regard, respect and affection for Doris Day's talent that she was cast as the leading lady opposite veteran male stars who were in classic films of 1939. James Stewart, James Cagney, Clark Gable, Cary Grant and David Niven were amongst her co-stars. LOVE ME OR LEAVE ME should've brought Doris Day an Oscar nomination for Best Actress.

During my VH1 years, in the late 80s into 1990, I gained a fresh awareness of what a special and often under-rated performer Doris Day was. At the same time was tops at the box office, she was also tops on the Billboard charts, adding hit records to her accomplishments. This is a feat that, in the 80s/90s, pop divas such as Madonna, Mariah Carey and Jennifer Lopez couldn't match. Doris was a wonderful singer, a good dancer and her acting ability got her an Oscar nomination (for PILLOW TALK). Oscar winners like Cher and Jennifer Hudson could not pull off being triple threats like that. Doris Day and Gene Nelson were a sharp dance team in her 1950s musicals.
In her acting, Doris Day seemed to know instinctively know the layers and dimensions of a good script and how to play it. YOUNG AT HEART is a remake of the hit Warner Bros. 1938 drama, FOUR DAUGHTERS. We see what seems to be the picture of the ideal 1950s suburban family, but there's darkness at the edges and some emotional dissonance in the marital lives of the three close sisters. Doris' character doesn't marry the lucky and privileged composer who falls for her. She marries his down and out singer/songwriter buddy (Frank Sinatra) who turns out to be the perfect man for her. If she can only convince him of that. Doris introduces another new song. It's called "There's a Rising Moon for Every Falling Star."

This is my favorite Doris Day vocal. It's not as popular as her hit songs as CALAMITY JANE and THE MAN WHO KNEW TOO MUCH but I love it. Through the years, as I grew up, got older, had my heart broken again and again, I would turn to this song to turn that light of hope back on in my heart. Here it is.

That Doris Day vocal will continue to turn on a light in my heart.