Actress/Producer Michelle Williams has four Oscar nominations to her credit. One of those was in the Best Actress category for playing Marilyn Monroe in MY WEEK WITH MARILYN. 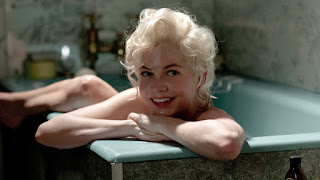 The story focused on the time the late Hollywood screen legend was in London to shoot THE PRINCE AND THE SHOWGIRL co-starring and directed by Laurence Olivier. 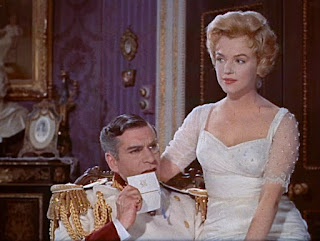 Now, Williams has dazzled us for weeks with a riveting, revealing performance as a Broadway star who once worked as a dance coach to Marilyn Monroe when she was shooting the musical comedy, GENTLEMEN PREFER BLONDES. Gwen Verdon had worked in front of and behind the Hollywood cameras before Broadway put her in the spotlight where she became a show-stopping star. Here's Gwen Verdon as dance coach in rehearsals with Marilyn Monroe for GENTLEMEN PREFER BLONDES. Both women have now been portrayed by actress Michelle Williams. 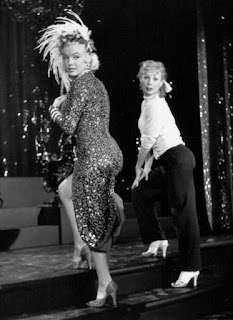 If Michelle Williams does not get Emmy and Golden Globe nominations for her performance on FOSSE/VERDON, there will be riots in the streets of West Hollywood. She's absolutely sensational in a TV mini-series that also gives us juicy, intelligent work from Sam Rockwell as Bob Fosse and Norbert Leo Butz as writer Paddy Chayefsky.

The hit revival of CHICAGO is still running on Broadway. The revival opened in 1996. In FOSSE/VERDON, we learn that Gwen Verdon was not only the star of the original production but also the engine of the whole vehicle.

With the conclusion of FOSSE/VERDON airing this week, I just wanted to give some space to celebrating the talents of both artists.

DAMN YANKEES was a big hit for Gwen Verdon. She was the witch who was well over 100 years  old and transformed into a hot baby by her old devil boss. Lola will vamp men into behaving badly so her boss can have another soul for down below.  Lola, pretending to be a Dominican beauty pageant winner, tries to vamp a wholesome baseball phenom by singing "Whatever Lola Wants." This is from the 1958 Warner Bros. adaptation of DAMN YANKEES directed by George Abbott and Stanley Donen. Choreography by Bob Fosse. Click on this link and watch the number featuring Gwen Verdon with Tab Hunter.

Like Gwen Verdon, Bob Fosse had movie credits before he became a heavyweight on Broadway.  In the early 1940s, Rosalind Russell scored with the comedy MY SISTER EILEEN. The film earned her an Oscar nomination for Best Actress. In the 50s, an original screen musical remake was done with the same title. From the 1955 musical, here's Bob Fosse in a bow tie with the terrific Tommy Rall. They're two of Eileen's suitors. Fosse did the choreography.
One of Gwen Verdon's biggest Broadway hits was SWEET CHARITY. Universal released the film version starring Shirley MacLaine. The movie version gave Bob Fosse his first opportunity to direct a film. During summer vacation, Mom let me take the bus to Hollywood Blvd to see it. I think society and dark news of the times worked against Fosse's first film, a colorful musical with a "chin up-carry on" hopeful ending. SWEET CHARITY opened a year after American was paralyzed with grief yet again when Dr. Martin Luther King Jr and, two months later, presidential candidate Sen. Robert F. Kennedy were shot and killed. Fellini's 1957 masterpiece THE NIGHTS OF CABIRIA was the basis for the Broadway musical comedy, SWEET CHARITY. However, unlike the classic Fellini film, the female lead character was changed from tender-hearted, uneducated prostitute in Rome to a tender-hearted, high school educated Times Square dance hall hostess. The same movie season of SWEET CHARITY's release, moviegoers were paying the see the young, not-too-smart male prostitute in MIDNIGHT COWBOY. MIDNIGHT COWBOY, THE STERILE CUCKOO starring Liza Minnelli and THEY SHOOT HORSES, DON'T THEY? starring Jane Fonda and EASY RIDER were dramas with a vibe that connected to movie audiences. SWEET CHARITY took about $20 million to make and made less than $10 million at the box office.

What I loved most about SWEET CHARITY was the Bob Fosse choreography coupled with how Fosse opened up the action with his staging and direction of some sequences. Not many folks talk about this number, but I love what the director/choreographer did with the "I'm a Brass Band" number. Here's Shirley MacLaine in Fosse's 1969 film.

Fosse's next film would be -- 1972's CABARET. It was a big hit with critics and a big hit with moviegoers. Bob Fosse would win the Oscar for Best Director.