He's that terrifically talented British actor with the pillowy lips who has a remarkable skill for playing characters who are "mad, bad and dangerous to know," to quote what Lady Caroline Lamb once said about Lord Byron.  Tom Hardy beat down some personal demons to distinguish himself as an actor. He has impressed critics in the U.K. and America with his performances. 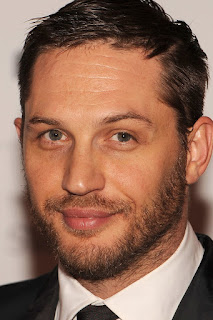 I suppose that the largest American audience will know Hardy from his work as Bane in the 2012 Batman thriller, THE DARK KNIGHT RISES... 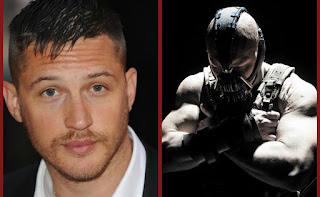 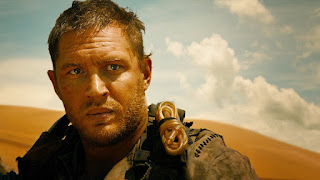 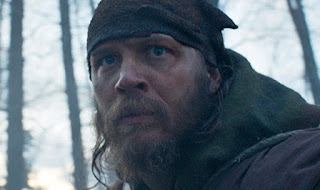 This is a heads-up blog post that one of Tom Hardy's best screen performances is now on Netflix. A young friend of mine who is passionate about film, knowledgeable about film and a mighty fine entertainment news contributor raved about this performance to me back in 2013. She was not the only entertainment journalist who this Hardy performance. Because of my friend's enthusiasm, I made a  point to see the movie. I whole-heartedly agreed with her.  Tom Hardy was amazing in it.  LOCKE is a British production, an independent feature, that runs only 85 minutes.

Are you familiar with THE HUMAN VOICE starring Ingrid Bergman? It was a 1966 ABC TV special in which Ingrid Bergman plays a woman talking on the phone to her lover. Her lover is on the brink of marrying another woman. THE HUMAN VOICE was a one hour special, with network commercial breaks, featuring Ingrid Bergman in an outstanding solo performance as a woman having a breakdown. Based on a play, it's a long and passionate monologue. Bergman is the only person seen in the production.  Sophia Loren did a version of it decades later.  Sophia Loren's 2014 production, HUMAN VOICE, was set in 1950s Italy and aired on cable's TCM (Turner Classic Movies). Loren played Angela, an older woman on the phone to her lover who is leaving her for another woman.

LOCKE is the male equivalent to THE HUMAN VOICE. Ivan Locke has a good construction business and a family life. He's soon to become a father again -- but the woman having his baby is not his loving wife. He is driving alone in his car and talking on the phone. He's trying the deal with this crisis in his personal life and serious calls about his business that need his attention. Tom Hardy is fascinating to watch and he holds your attention throughout the whole story.

It takes a strong, gifted actor to pull off something like that. Tom Hardy is such an actor.

If a weekend approaches and you'll have time for a Tom Hardy double feature, I recommend his riveting performance as one of those "mad, bad and dangerous to know" characters. He plays a real-life notorious British convict in 2008's BRONSON. He's a British criminal who robbed a post office and got a 7-year sentence. However, because he was such a violent guy, he made history when he wound up in solitary confinement for over 20 years, longer than any previous criminal. His name isn't Bronson. That's his "stage name," if you will.  Criminal Michael Peterson always wanted to be famous so he takes on the name Charles Bronson. It's the same name as the American star in the DEATH WISH movies of the 1970s.

BRONSON is raw and randy. In prison, his violent outbursts continue, he's naked a lot, he comes to embrace the arts and eventually we'll see him in clown make-up. This is a different kind of prison biopic. Usually, I'm not drawn to films like BRONSON but Tom Hardy is the bad and the beautiful as this convict.  You can't take your eyes off him. 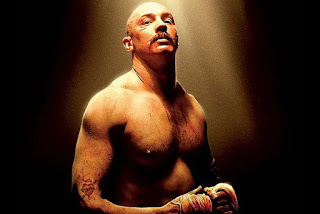 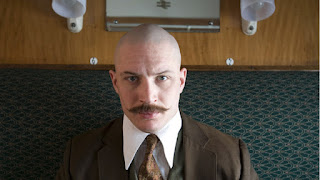 There are crude but funny moments in this film. For instance, there's there one in which the hyper, loud convict sticks his bare butt out at a guard in his cell and orders him to apply Vaseline to it. At first, the guard is confused. As one would be.

The BRONSON soundtrack includes music by Verdi, Wagner, Puccini and a vocal by Doris Day.

LOCKE is currently on Netflix. BRONSON is not. Now go marvel at the talent of Tom Hardy.