For PRIDE Month, Movies You May Have Missed

June is Pride Month. To salute it, I've got some movie recommendations for you. They're features you may have missed during their theatrical releases. Sandra Bullock got her first Oscar nomination for 2009's THE BLIND SIDE. Not only did she get a nomination, she took the Hollywood gold home. I still definitely feel that her first Oscar nomination should have come in the Best Supporting Actress category for her performance as the woman who wrote TO KILL A MOCKINGBIRD. Sandra Bullock played novelist Harper Lee in the 2006 Warner Bros. release, INFAMOUS. This smart, slick and sharp film about Truman Capote during his time writing his masterpiece, IN COLD BLOOD, got about a teaspoonful of promotion from the major studio. That was a major misstep. 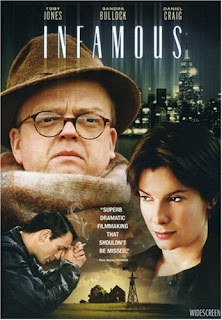 Yes, it came out a year after CAPOTE starring the late, great Philip Seymour Hoffman during the same exact period of Capote's life, INFAMOUS had a different tone, heart and viewpoint to it. CAPOTE took us to that dangerous intersection of celebrity, crime and journalism. INFAMOUS dove into truth versus fiction, self-deception versus authenticity. We see two best friends, both writers with keen minds and talent that will make them famous. Harper Lee took a shocking real life crime and used it inspire her novel, TO KILL A MOCKINGBIRD. Truman Capote is taking a shocking real life crime and changing actual quotes to make them more dramatic or interesting. As a gay man, he lies to himself to cast off shadows of heartbreak from his childhood. Toby Jones is a knockout as Truman Capote. It's a fine performance. INFAMOUS is a fine film with a stellar cast. Click onto this link to see a trailer:

The Toby Jones Truman drops famous names with seeming spontaneity and pours out gossip like champagne. He does this, in a way, to feel accepted and special and to be treated with some regard. I know. To be honest, I've done the same thing many times over the course of my career. INFAMOUS features several actors as celebrated figures who knew Truman Capote.
Truman gets tripped up in his own self-deception when he think he's falling in love with one of the convicted killers he's writing about in his book. That's his conflict. Harper will notice. She'll try to help and advise as bet she can. She's having her own inner turmoil as she tries to come up with a novel to follow the huge success of TO KILL A MOCKINGBIRD. Bullock gives a wise, graceful performance as the friend who will tell Truman the truth he doesn't want to hear but needs to hear.
In 2006, I was the weekly movie reviewer on Whoopi Goldberg's weekday morning radio show out of New York City. I saw INFAMOUS at a critics screening. I was so taken with that, after the film ended, I told a Warner Bros. publicist present that the studio should campaign for Bullock to get an Oscar nomination. I told the publicist I'd be saying she was Oscar nomination worthy in my radio review. Unfortunately, the studio gave INFAMOUS minimal promotion.

You may think a movie with the title THE SKELETON TWINS is a horror comedy. However, it's not. It does have some laughs but this is a good, touching drama starring two graduates of SATURDAY NIGHT LIVE. This 2014 indie film stars Bill Hader and Kristen Wiig. They play siblings working to repair a 10-year crack in their relationship after each one teeters on the brink of a tragedy. Hader is the heartbroken gay brother. Wiig is his straight sister.

Also in the film is Ty Burrell, known to millions as Phil Dunphy on the long-running sitcom, MODERN FAMILY. In THE SKELETON TWINS, Burrell gets to exercise his impressive dramatic muscles.
Some critics rightfully praised Bill Hader's performance as a hired killer on HBO's BARRY. They felt his dramatic work was a revelation. Those dramatic skills were a promise fulfilled if you saw THE SKELETON TWINS.

If you're up for seeing two men in a prison cell hold each other and dance romantically to a tape of Johnny Mathis singing "Chances Are," then I've got the film for you. Jim Carrey stars in a comedy/drama based on a real life character and a real life crime story. The movie is 2009's I LOVE YOU, PHILLIP MORRIS.

This is another film in which Carrey proved he can be serious and be effective in serious scenes. In a way, he takes his comedy type of guy from LIAR, LIAR and flips it to play the dramatic side.  Here, the laughs come the absurdity of what life forces him to do to be with the man he loves. They met behind bars. The film opens with Carrey as a married man. He's got a sweet life, a sweet wife, a kid and a good job. He's regular in his church visits. An emotionally jarring encounter in his family life history understandably ignites his abandonment issues. That plus an accident force him to get real. He comes out of the closet, he tells his wife the truth about himself, leaves his marriage and lives it up with a hot Latino boyfriend in Florida.

In order to make ends meet and keep the romance afloat, he becomes a con man. A resourceful and tough con man. He'll need that toughness in prison … where he falls in love. His sweetheart is the wide-eyed, dear and sexually energetic Phillip Morris, played by Ewan McGregor.
I read about I LOVE YOU, PHILLIP MORRIS being screened at the Sundance Film Festival in January 2009. Come January 2011, the film still had not been released nationwide.

I think the boldness and frank sexuality scared the film company. Just like with the greatly under-publicized KISS KISS BANG BANG from Warner Bros. in 2005, here was a film with a star in the lead role as an all-the-way out gay man who was a steely, masculine character. He wasn't a victim.  (In KISS KISS BANG BANG, Val Kilmer played a gay Hollywood private eye, one of the best in the business.) In I LOVE YOU, PHILLIP MORIS, Jim Carrey doesn't go for laughs. His performance stays rooted in growing from the heartbreak of the character. He commits to the character. If only the film company had committed to this movie.

Now let's look at sex in cinema. Or try to. 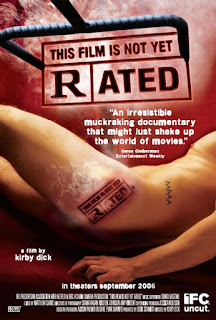 A 2006 documentary has a bunch of show biz figures -- actors and directors. They are all united in wondering "What the holy heck is up with the Motion Picture Association of America and who exactly is on that ratings committee?" If you love films, this feature will make you angry and make you laugh. The ratings board seems to love violence more than lovemaking and gay sex makes their heads explode like the evil space creatures hearing Slim Whitman music in MARS ATTACKS! Because we do not know who the members of the ratings board are, the documentarian hires a lesbian private eye to smoke out the mysterious and conservative figures.  She is absolutely fabulous. A movie character should be based on her. Click onto this link to see a trailer for THIS FILM IS NOT YET RATED: