During this week in history, Oscar-winning actress Hattie McDaniel was born. You know that the late star was the first Black person nominated for an Oscar and she was the first to win. Her victory came in the Best Supporting Actress category for the 1939 classic, GONE WITH THE WIND. Before GONE WITH THE WIND, you saw her hold her own in small parts opposite big stars such as Katharine Hepburn, Barbara Stanwyck, Jean Harlow, Ginger Rogers, Mae West and Irene Dunne. Her film with Irene Dunne was 1936's SHOW BOAT. 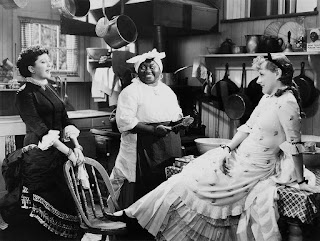 When my sister and I were kids back in Los Angeles, we heard a lot about GONE WITH THE WIND. We heard the legend of its long, famous search for the perfect Scarlett O'Hara, we heard about its sensational business at the box office and the record number of Oscars that it won. GONE WITH THE WIND had not yet made its highly-rated 1976 network TV premiere on CBS. It would be re-released and make even more money. It was re-released when Betsy and I were kids. Being a movie geek, I begged Mom to let us see it one Saturday afternoon. That was fine with Mom. She'd drop us off at the movie theater in Inglewood and pick us up when it was done. I think she was secretly glad she'd have us out of her hair for most of an afternoon.

My sister and I were dazzled by this old Hollywood classic. The print was pristine. The sound was good. The movie was action-packed. There seemed to be something happening every three minutes. True, I know the racial politics were funky but I was taken mostly with the production values of this Hollywood epic, the sweep of it and the acting.  When it was over, we stood outside the theater and waited for Mom to drive up to get us. When we got in the car, one of the first things she said was "What did you think of Hattie McDaniel? Wasn't she something?" 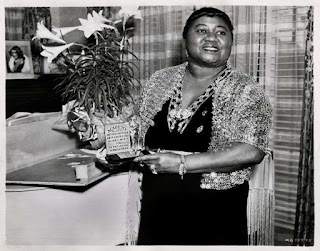 She certainly was. Even early in my teens, I could feel that Hattie McDaniel stole every scene she had in that long film. Vivien Leigh deservedly won the Best Actress Oscar for GONE WITH THE WIND. The film also won for Best Director (Victor Fleming) and Best Picture. Vivien Leigh owns that movie. She gives a galvanizing performance as Scarlett O'Hara.  Your eye is constantly on her. Nevertheless, as strong as her performance is, the only cast member who can pull focus from Vivien Leigh is actress Hattie McDaniel. When Hattie's in a scene with Vivien Leigh, you're looking at Hattie. Hattie had big screen charisma. She brings dimension and depth to a role that, in those Hollywood days, could have wound up just another generic plantation servant character. Hattie knew how to lift that character off the script page and give her a real life, a real vibrancy you could feel. 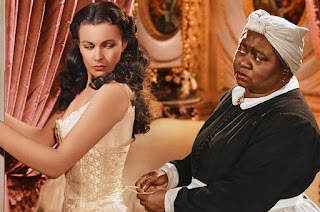 Hattie McDaniel was a gifted and versatile actress whose roles, even after she won the Oscar, were irritatingly limited because of race in Hollywood.  Hattie could deliver the goods in dramas, comedies and musicals. That brings me to 1936's SHOW BOAT, the first sound era version of the successful 1927 Broadway show.

Hattie McDaniel was born June 10, 1893. She was a groundbreaker. She was also a Hollywood outsider because she was black. James Whale directed 1936's SHOW BOAT. He was a groundbreaker. He was also a Hollywood outsider because he was openly gay. Whale changed the game for horror movies in the 1930s. He directed FRANKENSTEIN (1931), and BRIDE OF FRANKENSTEIN (1935). Look at BRIDE OF FRANKENSTEIN again. It's practically BROKEBACK MONSTER. The big, intimidating creature escapes from the bondage of conservative villagers and flees to the woods. He's given care, food and shelter by an older blind man who introduces the creature to classical music, wine, cigars and throw pillows. They have a nice, peaceful life together in a cottage in the woods until conservative white men with guns show up to disrupt and ruin it all. The next thing you know, the lonely monster is back in the conservative village on the verge of entering into what could seem like a marriage of convenience with the newly-created Bride of Frankenstein. That marriage will not work out. Tragedy will ensue. He was happier with the older guy in the woods. 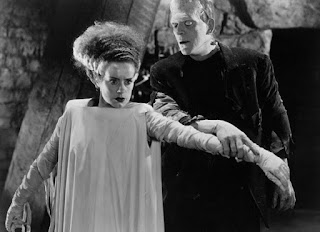 Director James Whale had empathy for the outsider. In his version of SHOW BOAT, African-Americans are the outsiders and the attitudes of racism are The Monster. The 1951 MGM version, done in glorious Technicolor, softened the racial aspect. Whale makes his strong points with the power of visuals just like he did in FRANKENSTEIN and BRIDE OF FRANKENSTEIN. The show boat is a travelling theater eagerly awaited by the townsfolk in every stop along the Mississippi.


Notice when ticketholders walk into the show boat theater.

You see Americans, black and white, headed into the same place for entertainment. They're pretty much side-by-side, like animals boarding Noah's Ark, but notice they are separated. There are two lines. One for white people. One for black people. The white people are seated on the main floor. The black people have to sit upstairs in the segregated gallery.

Irene Dunne, first seen as the young lady who longs to be on the stage, is fascinated by all the performers. Her best friend -- and the show's main attraction -- is torch singer Julie LaVerne. I know that modern-day viewers may cringe at the blackface Irene Dunne's character does onstage. Blackface was a tradition at that time. I feel Whale is showing the bruising irony on the show boat that reflects society. Because of segregation, black folks could not be stars in the show. Black folks could not sit on the main floor. Black folks had to sit in the gallery where they endured watching a white person perform as a caricature of a black person and get applause. 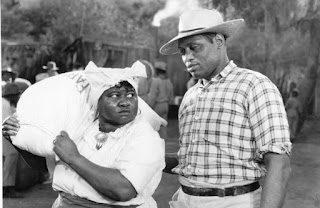 In SHOW BOAT, Hattie McDaniel sings. She plays Queenie. Yes, Queenie is a servant character. However, this is one of those rare films in which Hattie plays a woman who has a man responding to her romantically. The character is Queenie's husband, Joe, played by one big handsome hunk o' man, famed singer/activist Paul Robeson.  Here's a photo of Robeson with director James Whale. Robeson sings "Ol' Man River." Unlike the 1951 MGM adaptation, as "Ol' Man River" is sung by Joe in the 1936 version of SHOW BOAT, we see how horribly racial oppression can wear down one's life. The original production covers a period from 1887 to 1927. 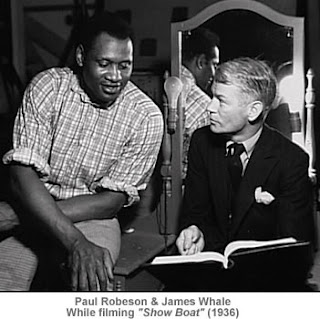 The way Whale stages the "Can't Help Lovin' Dat Man" number shows not only a warmth and relaxation, it shows an equality that society won't let exist on the stage or in the audience. This number happens in the kitchen where Queenie is the ship's cook. It happens before the disruptive revelation that Julie LaVerne is really a light-skinned black woman who kept her racial roots a secret. She's committed the crime of marrying a white man. When the truth is revealed by a law enforcement official, she'll be forced to leave the Mississippi River show boat.

See what I mean? The director of FRANKENSTEIN and BRIDE OF FRANKENSTEIN may have seemed an odd choice to direct SHOW BOAT, a musical that includes a theme of racial prejudice. However, he was a perfect choice. As a gay man, he understood how it felt to be an outsider and excluded. He made racism the monster. 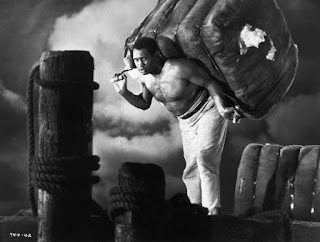 There is racial harmony in this number. In the kitchen, the three women can co-exist in the same space on the same level -- the black woman, the white woman and the light-skinned black woman who's been passing for white.  The monster of racism will come along and kill that harmony. Here are Irene Dunne, Hattie McDaniel and Helen Morgan. As Julie LaVerne, Helen Morgan recreates the role she originated on Broadway in 1927.

The wonderful Sir Ian McKellen, an openly gay actor, got a Best Actor Oscar nomination for playing director James Whale in the 1998 drama, GODS AND MONSTERS.  Hattie McDaniel was born this week in history. In addition to that, the Supreme Court ruled in favor of Loving v. Virginia this week in 1967. The Supreme Court ruling made interracial marriage legal all across the country thanks to Mildred and Richard Loving. You read that correctly. Interracial marriage was still a crime in several states as America entered the 1960s. After being jailed in Virginia for simply getting married, Mildred and Richard Loving took their case to a high court. You can see their story in the fine 2016 film called LOVING. Ruth Negga and Joel Edgerton are excellent as the landmark couple.