The Bard, a Beatle and Franco Zeffirelli

The film work of Franco Zeffirelli helped me get an "A" in my high school English Lit. class. To this day, I am still grateful and I still recall the visually rich, artistically enlightening film of his that I saw. My hometown community, South Central Los Angeles, had schools lacking the healthy fine arts education budgets that schools in predominantly white communities did. I attended a parochial high school in Watts, a school with a mostly Black and Mexican-American student body. Teachers at our school dug into their own pockets to contribute to our fine arts supplies and knowledge. They also took great advantage of group sale discount rates for schools to attend weekday matinees of prestigious films. These were films that usually had exclusive engagements in Hollywood and were based on acclaimed plays or literary pieces that students might be studying in school. This was exactly the case with Zeffirelli's young, lively, passionate and popular 1968 version of William Shakespeare's ROMEO AND JULIET. 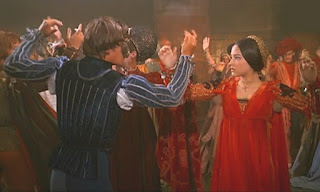 The 1936 Hollywood version starring Norma Shearer and Leslie Howard aired a few times on local KTTV/Channel 11 when I was a kid. The stars playing the young star-crossed lovers were in their 30s. I would watch most of it when it aired but never the whole thing in one sitting. Zeffirelli's ROMEO AND JULIET was delicious eye candy. The intelligent opulence of it was exactly what I hoped a big screen grand romance would deliver.  College-aged actors, Leonard Whiting and Olivia Hussey, had the lead roles. Their youth and vibrancy connected to us students. Our class boarded busses to see the film as a field trip one school day. We were studying Shakespeare's tragedy of young love that semester. Zeffirelli's film made Shakespeare's language come alive for me. I was no longer intimidated by it. The nudity in the film truly was tasteful and not lascivious. 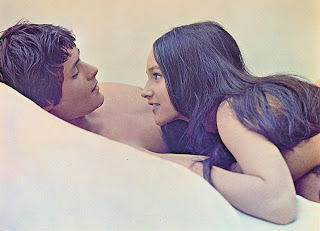 In an age of BONNIE AND CLYDE and THE GRADUATE, the "Bard of Avon" (William Shakespeare) had written a hit movie. Zeffirelli's ROMEO AND JULIET clicked with young moviegoers the way superhero action fantasies click today. Critics loved it. Audiences loved it. ROMEO AND JULIET may have had a romance that didn't end well but their box office was terrific.  Even the soundtrack was a best-selling album.


Those high school field trips for the sake of fine arts education were special to me. I always appreciated them. They made my embrace of the arts more enthusiastic. When the ROMEO AND JULIET nude scene appeared on the Hollywood screen, the audience was packed with students from other schools that also had taken advantage of the discounted group rates. There was very little giggling at the nudity. What I remember topping the sound of giggles was the sound of teen girls sniffling and crying at the beauty of the scene. A scene that came from the classic writing of William Shakespeare and presented through the eyes of an Italian filmmaker.

One marvelous morning in 1989, the name of Franco Zeffirelli came up in an interview. I worked on VH1 at the time and had my own celebrity talk show. For a VH1 special, I was flown to London to interview Paul McCartney.  Here's a clip with McCartney, me and the Zeffirelli mention.

Yes. In 1968's ROMEO AND JULIET, we could've seen the bare bum on one of The Beatles. 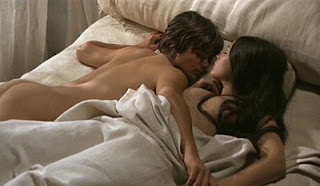 Franco Zeffirelli's ROMEO AND JULIET was one of Paramount's biggest hits of that year. It won Oscars for Best Cinematography and Best Costume Design. It was nominated for Best Picture.

His other film credits include 1967's THE TAMING OF THE SHREW starring Elizabeth Taylor and Richard Burton, 1972's BROTHER SUN, SISTER MOON, his 1979 remake of THE CHAMP and 1999's TEA WITH MUSSOLINI starring Cher, Maggie Smith, Judi Dench and Lily Tomlin.

Think about it. Because of him, we could have seen Paul McCartney in tights. Wow.