Movies with My Dad

Yesterday was Father's Day and I thought a lot about my late dad.  If you've followed my blog posts for an appreciable amount of time, you know that my parents divorced. I'm the oldest of three children. Mom and Dad separated when I was on the brink of starting high school. He moved out of our house, a short distance from Compton, and moved into Grandmother's spare room. His mother lived in Inglewood. When I saw an ad in a Sunday edition of The Los Angeles Times that read "Wanted: Movie Buffs for New Game Show," I was a classic film geek and Catholic high school student in a single working mother household. For someone who is passionate about classic films, I was lucky to have the parents I did. They loved the Hollywood and foreign film greats. We saw many noteworthy films at the drive-in movies -- and drive-in movies were a terrific bargain back in those days. You saw a double feature and children under 12 were admitted free. Two movies plus coming attractions (now called "trailers") and a cartoon. That was my favorite family pastime. Dad loved movies directed by David Lean. Mom loved anything that starred William Holden. I was in the back seat, wearing my pajamas under my street clothes, as the Rivers Family had a night at the drive-in to see THE BRIDGE ON THE RIVER KWAI, directed by David Lean and starring William Holden. 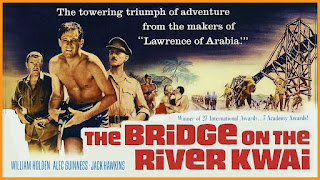 I grew up fascinated by films, but I was fascinated with some kinds of films that Dad wasn't. Like screwball comedies and musicals. Dad was a World War 2 veteran. He'd been a sergeant in the Army. Before he went into the service, he was a weightlifter. I was still under 12 when we went to the Twin-Vue Drive-In one night and the second feature was WHAT A WAY TO GO! 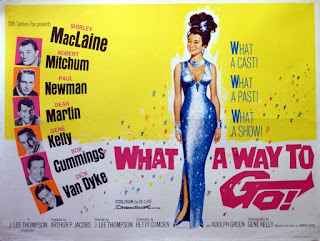 My parents knew it had some of their favorite stars -- Shirley MacLaine, Paul Newman, Dean Martin and Robert Mitchum -- however, they didn't expect it to be such a festive satire with fabulous outfits on Shirley and musical numbers featuring Gene Kelly. I did expect it. 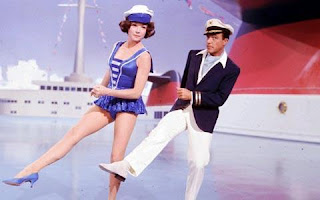 When the colorful opening credits started, even before her name appeared, I enthusiastically leaned over to Dad from the back seat and proclaimed, "The costumes are by Edith Head!" 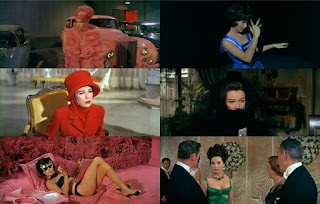 I was quite proud of myself for knowing that. Daddy never turned around. He remained still, stone-faced and looking forward, as if he was a statue on Easter Island. Mom calmly told me to sit back down. If I'd been a cartoon character, I would've been this little bookworm rooster getting lessons in how to play sports from Foghorn Leghorn. 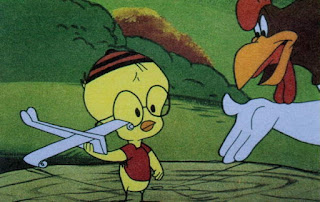 When I saw the ad in the newspaper for the movie buffs and read that the buffs were needed for a new game show about movie trivia, I was determined to get on the show. But the ad also read "18 years or older." All interested parties were to schedule taking a written test.

I was determined to be contestant on that TV show. But how? My sister wisely commented that it would be tough, unless I made it seem like Mom's idea that I take the test. It was a great and perfect suggestion. I casually mentioned to Mom that I saw an ad in The Los Angeles Times. I read it to her, followed by a manipulative "I wonder if they'll get any contestants from South Central L.A."

Mom replied with a "Probably not." She went on to say that Hollywood doesn't think our people have such knowledge. She added that I could probably ace that test in a heartbeat if I called and told the folks I'm under 18 but I'm in the Watts area and love old movies and want to take the test. She said that could make the community proud if I got on the show. She ended her mini-Mama-logue with "But no one ever listens to me."

I called. I got an appointment to take the written test. I did better on that test that I'd do on my SATs. I aced it. I was given another test in a different room with visuals flashed on a screen. I aced that too. The execs wanted to speak to my mother. That summer, I'd be the first Black contestant on THE MOVIE GAME

The syndicated show was shot at the old Goldwyn Studios in Hollywood. The day of my taping, a special edition with two teen rivals, Mom took off from work to drive me there and to be in the studio audience with my sister. I woke up that morning nervous and excited and giddy that I was "going to the studio."

The morning began as usual. I walked a couple of blocks over to the store to get the morning paper. As usual, I read the entertainment section. Then, a photo on the front page of the Sports section caught my eye. A columnist had a cigar in his mouth. He was wearing his horn-rimmed eyeglasses, sandals and a toga. He wrote about his day working as an extra in an upcoming new film adaptation of Shakespeare's JULIUS CAESAR.

The game show taping started. My opponent was tough. So tough that, by the end of the show, we made another piece of history with a tied score. A tie-breaking special question was needed. We had to name a male star. The first clue was read. We didn't know the answer. The second clue was "He'll soon be seen in a new version of JULIUS CAESAR."

I hit my buzzer and said "Charlton Heston."

I was the first Black winner of THE MOVIE GAME.

Mom's surprise and delight at my winning, something that left her sweetly impressed nearly to the point of being speechless, meant more to me than the prizes I got. I wanted to prove to her that my interest in films was serious and not adolescent vaporing.  When we got home, she told me to call Dad and tell him how everything went.

Dad was also thrilled. I told him the show was taped and was scheduled to air in a couple of months. He asked about the tie-breaker question.  "How'd you know that answer?"

I replied, "Because of something I read today in the paper. In the Sports section."

I repeated what I said.

I guess that made up for my Edith Head moment during WHAT A WAY TO GO!