Meryl Streep Was Right About PARIAH

Dinner time. The lights are low in the family dining room. The mother and father are home from work. They are professionals. The father is a policeman. The mother has an office job. Both are neatly attired. He's having a beer. She's having a glass of white wine. With them at the dinner table are their two daughters. Both are in high school. One is still in her school uniform. The other is in casual, less feminine attire. This is an African-American family in Brooklyn. One of the girls is coming out as a lesbian. If the church-going mother could pray her daughter into a state of total heterosexuality, she'd put that glass of wine aside and pop a bottle of champagne.  This is the family we meet in the 2011 indie film, PARIAH.  It was written and directed by Dee Rees. 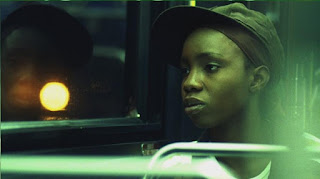 I watched this movie because of Meryl Streep. She mentioned it in one awards show the season she won an Oscar for playing British Prime Minister Margaret Thatcher in THE IRON LADY directed by Phyllida Lloyd. The night Streep won that Oscar, I was in Northern California watching the telecast. Afterwards, the network affiliate aired a live post-Oscars show. Meryl Streep was relaxed and giddy and available for interviews. She spoke to one of the correspondents and said that, aside from winning, one other thing she was happy about was that there easily could have been more than five nominees for Best Actress. She was thrilled to see so much good work from other actresses that season. She singled out Kim Wayans as having been worthy of an Oscar nomination for her performance as the conflicted Brooklyn mother in PARIAH. 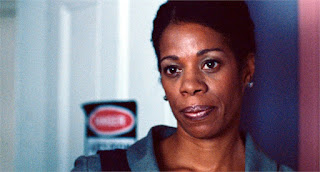 A tremendous compliment like that from Meryl Streep on live television? Wow. I definitely made a point to see it. Streep's compliment stood out to me because, like millions of other TV viewers, I knew Kim Wayans from weekly comedy duty on the sketch comedy series, IN LIVING COLOR.

I watched PARIAH soon after that live Hollywood post-Oscars telecast. I watched the movie again a couple of weeks ago. Meryl Streep was right about PARIAH. What a good movie. It presents different images of an African-American family dealing with something we don't often see Black families deal with in films focused on a Black family. The daughter is finding her own voice and identity sexually and intellectually. She knows she's not straight. She knows the school she wants to attend after high school graduation. Her sister knows the truth. Her loving father senses it. Her mother breaks your heart as she watches the rug pulled right out from under the plans she made for her daughter. Also, there's a little tension in the marriage.

I could feel the Kim Wayans performance. I could see some of my own mother in her. Audrey (Kim Wayans) is not a mean, irresponsible mother. She's self-deluded. You see the pain behind her eyes. You know Audrey feels if co-workers and church friends find out that her daughter is a lesbian, they will see her as a failure in Black Mothering.  Audrey breaks her own heart thinking she could arrange her child's life the way she'd arrange furniture in the living room before company arrives.

Her daughter is smart, a good student and responsible. She prefers not to wear traditional feminine clothing. It jars Audrey that her daughter won't complete Audrey's image of the fine middle class African-American family with two working parents and two lovely daughters both in school. To her husband, Audrey snaps "I'm tired of this whole tomboy things she's doing!"
Applause also goes to Adepero Oduye as Alike, the lesbian daughter and Charles Parnell as the tough but understanding father who's not above expressing humility. 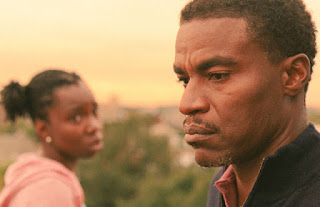 To witness the dramatic acting power of Kim Wayans was amazing. Where has she been since PARIAH? Is she another actress of color who gave an outstanding film performance and then had no Hollywood script offers to follow it? If she was known for comedy and then delivered a dramatic film performance so moving that it got high praise from Meryl Streep on live TV, that should count for something.

PARIAH is a great film to see during Pride Month.  Filmmaker Dee Rees followed PARIAH with the exceptional MUDBOUND, one of the best films of 2017.  In MUDBOUND, Dee Rees directed Mary J. Blige in a dramatic performance that earned her an extremely well-deserved Oscar nomination for Best Supporting Actress. Look for MUDBOUND on Netflix.